Next time my mom berates me for taking the bus late at night, I’ll be able to back up my claim that that particular part of downtown is totally safe at two in the morning. That’s thanks to SF Crimespotting, a new site that superimposes detailed crime data from police records onto an accessible and pretty mapping interface.

Built by Stamen, a design studio specializing in data visualization, SF Crimespotting – like its Oakland-focused predecessor – maps crimes in the city to street level with color-coded dots representing an array of transgressions. The snazziest part is that it lets you limit your search by time period (month, week, day or subsection thereof) or by broader intervals like “commute,” “dark” (nearest hour), and “swing shift.” They’re also working on RSS feeds that send alerts when crimes occur in areas you specify.

Besides the tool’s potential impacts on the real-estate market, crime prosecution and agoraphobia rates, Crimespotting is cool in that it recognizes the connection between space and the social. Most social analysis mistakenly considers the environment to be a neutral backdrop to interactions and ignores the interplay between people and space.

For one, representing information geographically can lead to some unexpected (and aesthetically pleasing) correlations. The image below, for example, shows trees, cabs and crime. 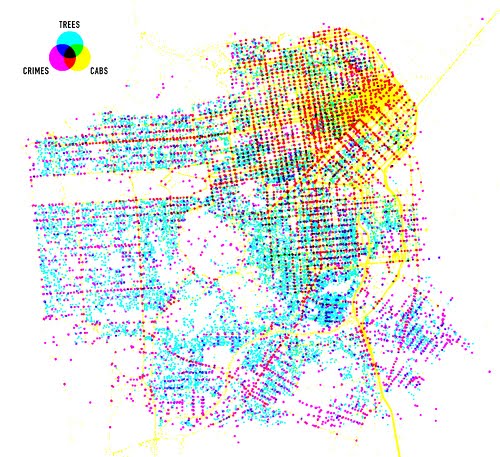 SF Crimespotting can also serve as a myth buster (there were a lot more crimes around that downtown bus stop when it was light out than when it was dark!) that can not only calm my mom’s fears, but also potentially reshape our mental maps of the city. Realistically, though, most people won’t reference the site enough for this objective information to substantially alter their views of neighborhoods, which have a lot to do with personal experience and emotional valence.

The folks at Stamen, who undertook the project independently of the city or police department, are mappers with a mission:


We’ve found ourselves frustrated by the proprietary systems and long disclaimers that ultimately limit information available to the public. As citizens we have a right to public information. A clear understanding of our environment is essential to an informed citizenry.

Crimespotting democratizes access to geo-specific data, making it possible for anyone to get information about their environment. They make it even easier to share information by allowing you to pass on links to a particular view of the map. Decentralizing geographic data not only enables anyone to be a social scientist, but is critical for strengthening local decision-making and community planning efforts.