by Peter Sigrist and Rebecka Gordan

“Sustainable architecture and urban development can never be solely technical issues or be reduced to a matter of points on a certification scale, but need to begin with fundamental social issues: How are we to live together and how can architecture and the city create best possible conditions?”

– Henrietta Palmer in “Art and Institution: A Contradiction?” 2010 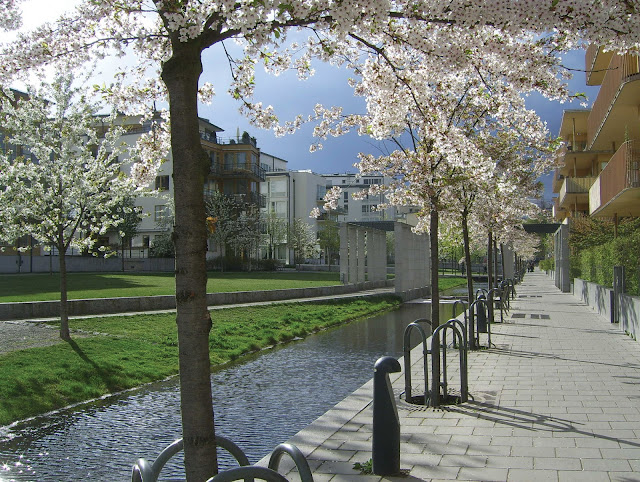 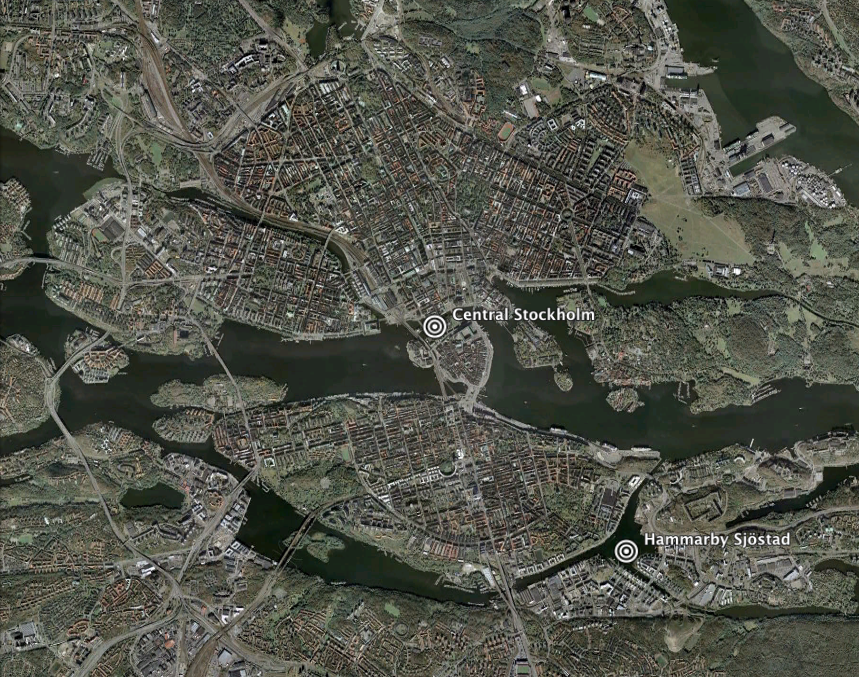 Hammarby Sjöstad is a large residential development in Stockholm, with an innovative urban design and sustainability program. Since 1995, the municipal government has transformed a 200-hectare industrial site on Hammarby Lake into a neighborhood with 9,000 residential units, 400,000 square meters of commercial space, new canals, piers, bridges, a tramway and ferry service. By 2011 it was home to 17,000 people, and the total population (including 5,000 local workers) is projected to be almost 30,000 upon completion in 2017. 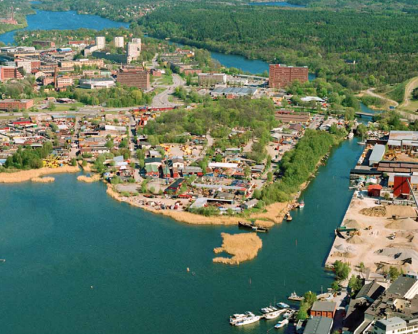 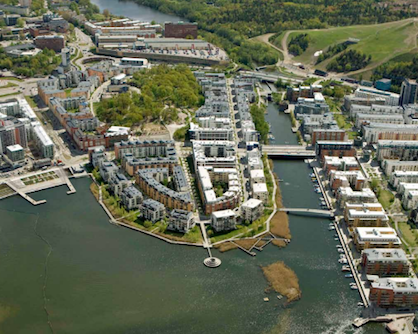 Land use around Hammarby Lake before and after redevelopment. Source: ITDP

The industrial area was once anchored by the Luma co-operative lamp factory in a functionalist architecture landmark constructed between 1929 and 1947. The Lugnet peninsula (now called Sickla Udde) accommodated small-scale industrial operations and a trailer park. Many enterprises around the lake were prospering — albeit informally or illegally — when redevelopment proposals started to gain traction in the 1990s. Their removal was possible because the city owned most of the land. While government officials raised the threat of expropriation, they ended up compensating many business owners at rates far above market value to avoid lengthy appeals. 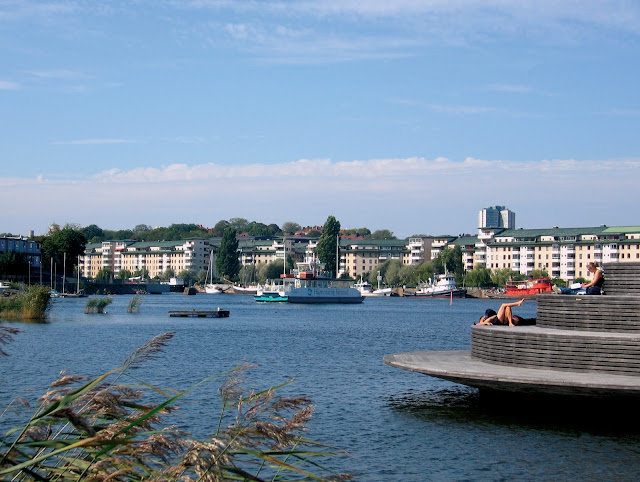 The decision to uproot industry around the lake was driven by rising demand for urban housing and a desire to address environmental contamination, noise, traffic and disorder associated with the site. It was a prime location for the government’s “build inwards” strategy of reducing sprawl by reusing developed territory within the city. This was a response to state-sponsored suburban housing construction during the 1960s and 1970s, known as the “million homes program.” The resulting apartment blocks lacked the healthy street life that tends to arise when accessible housing, employment, recreation and commerce coexist in walkable communities. In light of this experience, municipal leaders saw residential density as key to economic vitality, environmental conservation and quality of life in the new district.

The Stockholm City Planning Bureau drafted a master plan for multi-unit housing reminiscent of 19th-century urban blocks with interior courtyards and businesses at street level. They adapted this layout into U-shaped buildings to maximize waterfront views, and set height restrictions to bring more sunlight into each courtyard.

Hammarby Sjöstad’s urban livability features are complemented by a comprehensive environmental strategy. The municipal government decontaminated the area and set a goal for limiting carbon emissions to 50 percent of the average for new residential development in the city. The Stockholm Waste Management Administration worked with the Stockholm Water Company and Fortum — a Finnish energy company — to develop the “Hammarby Model” for managing water, energy and waste based on an “eco-cycle” of consumption and reuse. 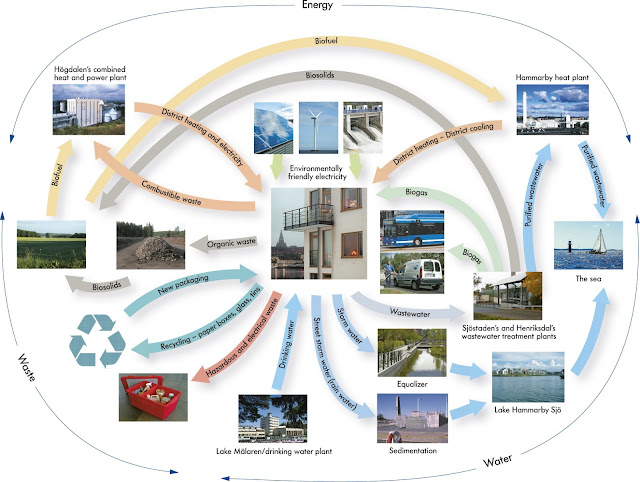 Among the development’s many energy-saving technologies is an incinerator that turns combustible waste into electricity. The plan also focuses on land use, building materials and transportation as means of conserving resources and decreasing the use of cars. This includes reusing the Luma factory for housing and amenities (including a new Brooklyn Brewery). A central community center showcases and supports the city’s ecological strategy. 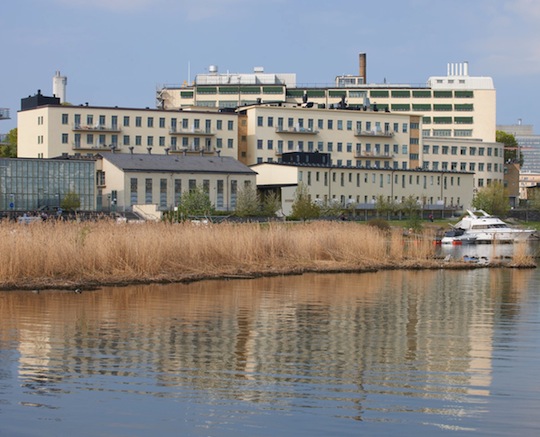 Despite Hammarby Sjöstad’s impressive planning, it has not escaped criticism. Providing advanced facilities for waste management, energy-efficiency and public transportation has apparently not prompted residents to adopt ecologically sensitive lifestyles to the extent expected. Post-occupancy studies show that many are unwilling to make even minor sacrifices to help realize the city’s environmental goals, lobbying instead for more parking (although their use of cars is still lower than average for Stockholm). A large shopping mall outside Hammarby Sjöstad has been an impediment to limiting the use of cars and supporting neighborhood businesses. In addition, the municipal government hasn’t enforced standards for window size and building materials that would further reduce energy consumption. While the development includes a small percentage of subsidized apartments for students and people with disabilities, and efforts are underway to increase low-cost options, existing costs have led to a much higher average income than that of the city as a whole. 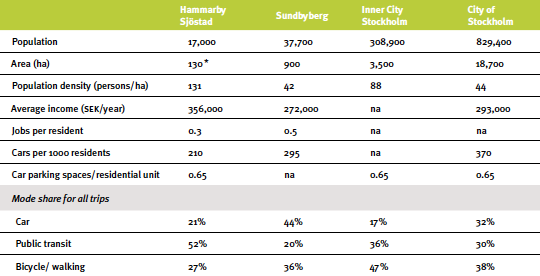 Hammarby Sjöstad in comparison with a nearby suburb, the city center and the entire city in 2010. Note the relatively high average income and low use of cars. Source: ITDP

Sustainability as a concept is blessed and cursed with a seemingly endless range of interpretations. It unites us in a general sense, but often becomes problematic in transition to specific action. Hammarby Sjöstad is a case in point: sustainable development served as a rallying call for public officials planning for the future, but also helped stigmatize the area’s previous inhabitants to make way for high-income housing. The redevelopment appears to be a net gain for the city, but critical assessment helps identify what was lost and what should be improved. Returning to the Henrietta Palmer quote, initiatives like Hammarby Sjöstad can benefit from continuous reflection upon how we live together and how to create the best possible conditions.