Mark Purcell on ‘Chains of Equivalence’ 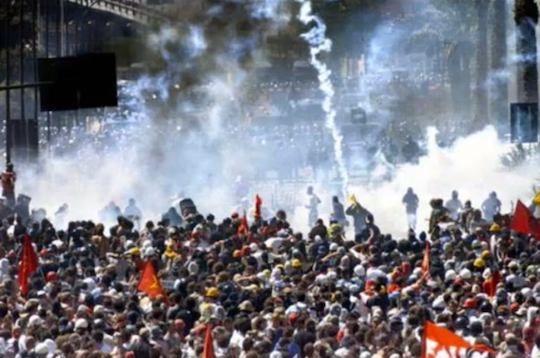 “Laclau and Mouffe (1985, 2000) understand that if we are to pursue a model of agonistic struggle, existing power differences mean that marginalized and disadvantaged groups will need to assemble creative and deeply political strategies to undo the current hegemony. In that context, they advocate what they call ‘chains of equivalence’: movements made up of allied groups seeking broad transformation of existing power relations. The groups in the chain each have their own distinct relation to the existing hegemony, and each group’s experience and interests are irreducible to the others. Each retains their difference. However, they are able to act in concert around an agenda of equivalence. That is, they see themselves as equivalently disadvantaged by existing power relations. ‘Equivalent’ in this case does not mean identical. They are not disadvantaged in precisely the same way, and Laclau and Mouffe explicitly reject the old-style social movements that reduced participants to a single social position (usually class). Each link in the chain remains distinct, but they operate together, in concert.

“The most talked-about model for this kind of idea is the so-called ‘anti-globalization’ movement that carried out the string of protests in Seattle, Goteborg, Doha, Genoa, Geneva, Quebec, etc. The movement is better understood as an anti-neoliberalization movement, because it involved a range of groups (e.g. labor, environmentalists, anti-third-world debt, human rights in China, etc.) that shared an equivalent opposition to the globalization of neoliberalism. Their concerns were in many ways disparate (outsourcing of jobs, sea turtles, rediscovering jubilee obligations, the occupation of Tibet, etc.), but they strategically deﬁned themselves as equivalent and acted together to oppose the WTO and other institutions committed to neoliberalization (Hardt and Negri, 2004). Each member of the coalition achieved much more than they could have alone, but they did not have to dissolve into a large and uniform collective to do it. While they did not achieve the end of neoliberal hegemony, they certainly succeeded in identifying it and calling it into question.”