Data Collection in the Moscow Metro

by Gulnaz Aksenova and Artur Shakhbazyan

In the words of John Holland, "the city is a pattern in time." Yet actions within its boundaries leave traces. Whether crossing the street, making a phone call or entering the subway, our traces are retained in the city's memory. 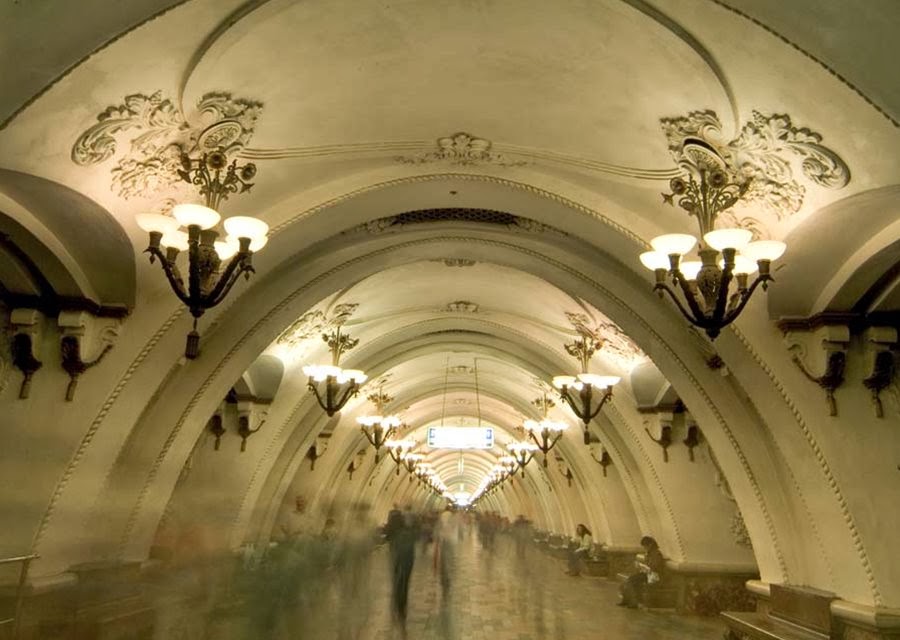 As the world becomes more digitized, so have our traces, joining the massive aggregate known as big data. This information is updated daily by sensors tracking social media, traffic flows, retail transactions, mobile phones, GPS signals and many other sources. A virtually limitless trove of quantitative measures, it has the potential to add new dimensions to our understanding of human experience in urban environments. But the positive and negative aspects of this potential defy measurement. 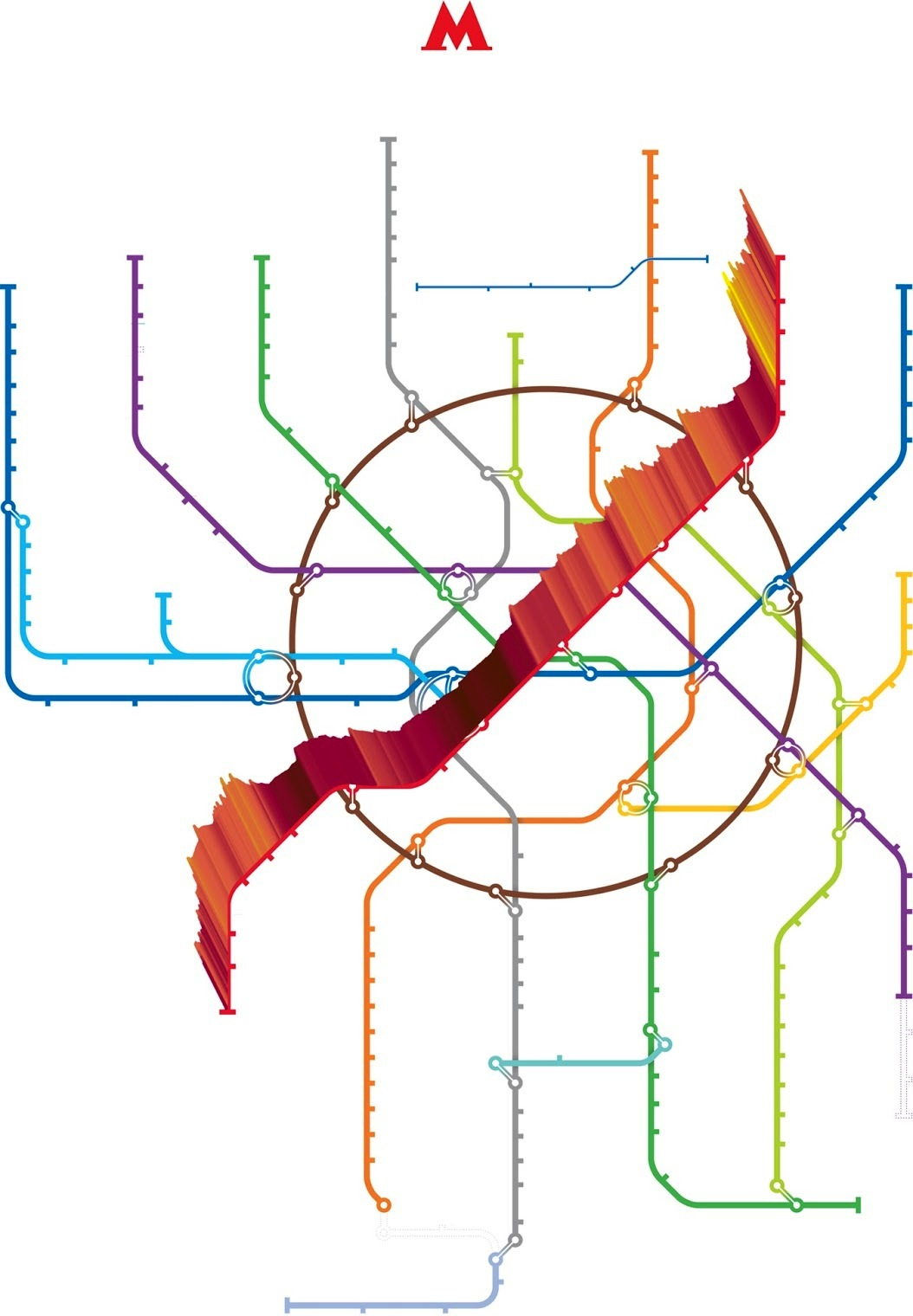 Visualization of human symptoms of stress on the Sokolnicheskaya Line of the Moscow Metro. Relative stress levels range from dark red (lowest) to light yellow (highest).
The Moscow Metro is full of urban traces. An estimated 70 percent of Muscovites, representing almost all social strata, use the Metro on a regular basis. This is inevitably tied to interaction with technology, both directly (validating tickets, riding escalators, using emergency call stands) and indirectly (being recorded by CCTV). The Metro's underground passages have become urban laboratories for collecting and analyzing data. 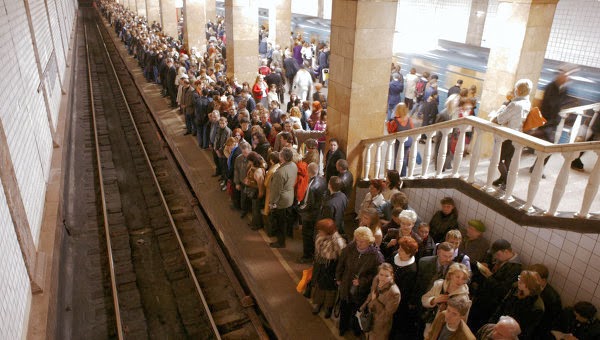 Macro data are among the oldest and most widely used sources, offering a snapshot of the past that can be used to forecast general trends. We know how many passengers used the Metro in the past few years and can thus predict the approximate number for the current year. What we do not know, at least from publicly available statistics, is how busy each station or train is at a given time, which is more intriguing.

Social media provides user-generated data from digital telecommunications and the Internet. Today, anyone can add to big data via cell phones and computers, sharing their thoughts or simply their locations. Digital networks collect information as people update their statuses and chat with friends, contributing to global databases that archive this activity. 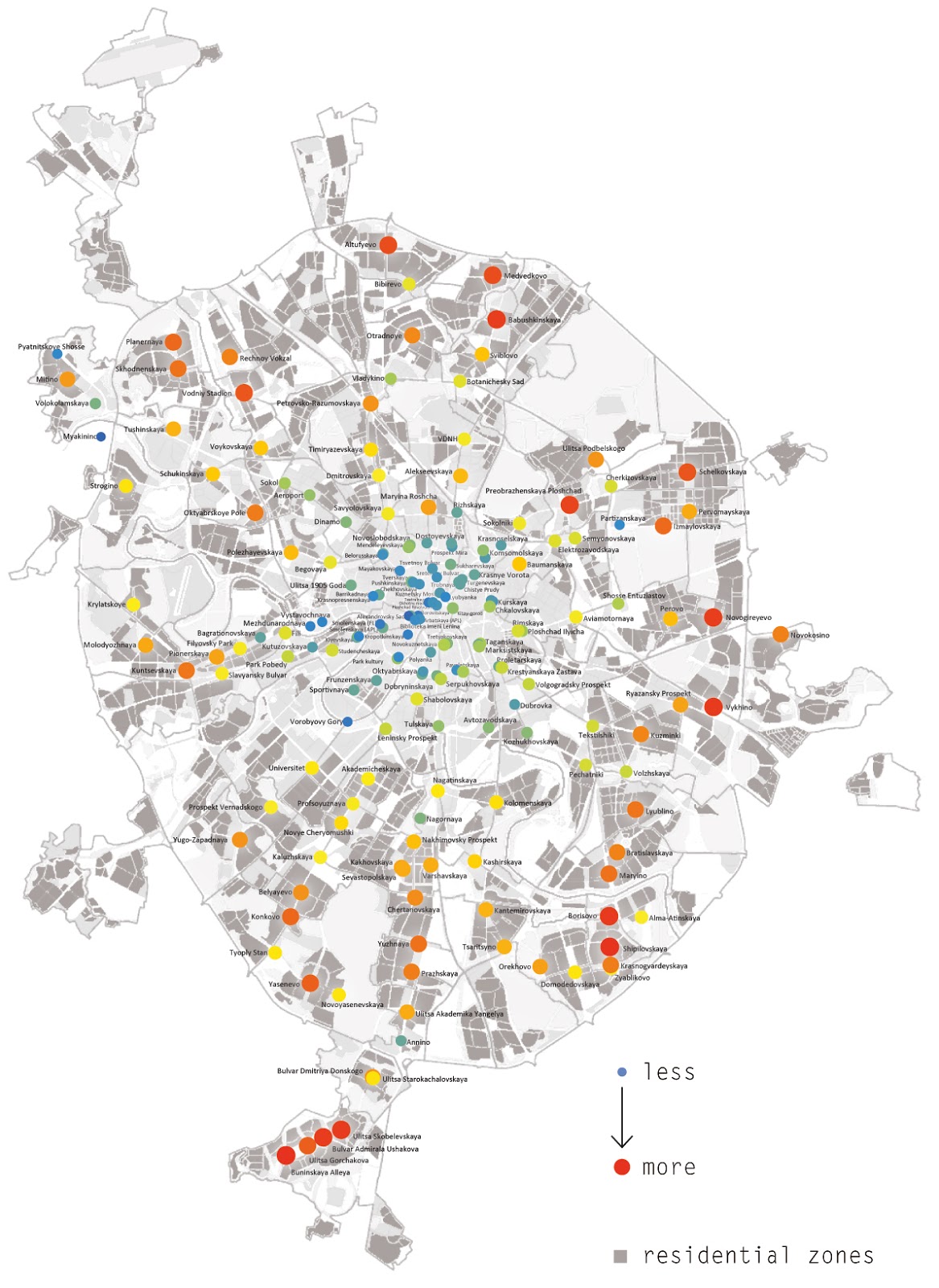 Regularity of Foursquare check-ins in the Moscow Metro.

The Foursquare social network allows users to show where they are by "checking in" online. They can also rate places and leave tips for others based on their experience. These data show, for example, that stations in Moscow's outlying residential districts have surprisingly higher rates of check-in per user than those in the city center.

Biological data can tell us about human-environment interactions at local and global scales. Recent studies have addressed outdoor settings and their influence on experience. Yet there is relatively little research on the impacts of indoor transitive spaces, like subway stations. 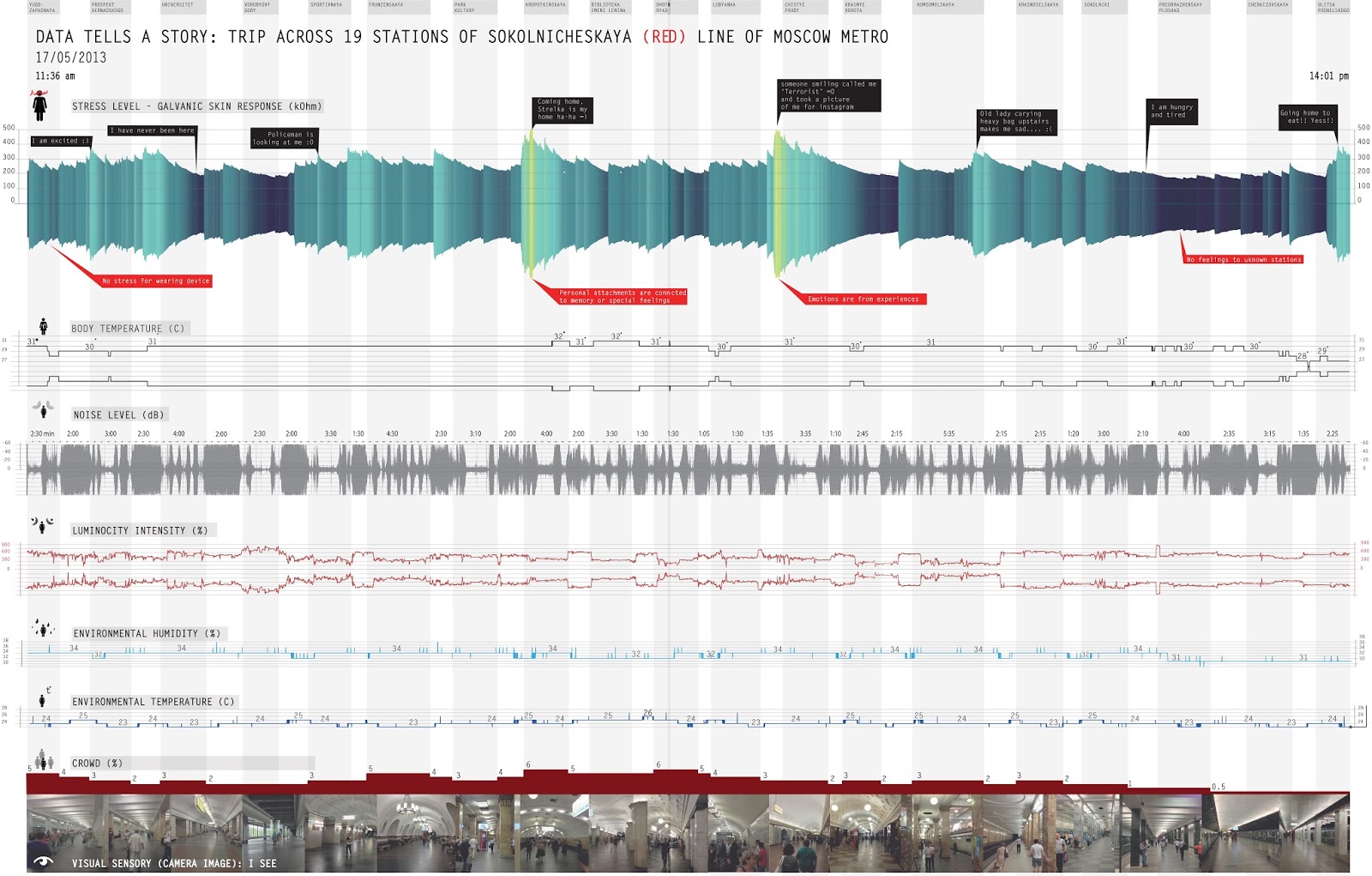 Human ecological data from the Sokolnicheskaya Line (click for an enlarged image).

Earlier this year, as students at the Strelka Institute, we built a wearable data-collection tool to gather information on human-environment interactions in the Moscow Metro. The device measures galvanic skin response, body temperature, air temperature, humidity, noise levels and light intensity. This helped us identify where people experience stress or excitement, shedding light on contextual factors that influence their experience.

Embedded technologies are capable of recording, correlating and even anticipating human behavior. They can inform urban governance and play important roles in safeguarding health conditions, reducing criminal activity, improving transit efficiency, and other public services. At the same time, they can threaten privacy and facilitate the abuse of power.

Speculative forms of data collection and use in subway stations.

Data collection is becoming part of everyday life for Muscovites and visitors who use the Metro. Each person, train and station holds insight into solving urban problems. However, it is essential to remember that people decide how to apply data. These decisions must be transparent and democratic, with careful attention to potential errors and misuse.

Gulnaz Aksenova and Artur Shakhbazyan are 2013 graduates of the Strelka Institute in Moscow. Gulnaz is now a doctoral student at the École de technologie supérieure in Montreal, and Artur is a project director at the Moscow Department of Transportation.

Credits: All images are by Gulnaz Aksenova and Artur Shakhbazyan unless otherwise noted.