Although the Bay Bridge opened six months before the Golden Gate Bridge, it is widely considered the lesser of the two. The Golden Gate's Art Deco design in striking international orange has made it a global icon, while its silver counterpart is a heavily used expressway connecting San Francisco with its industrial neighbor, Oakland. After 75 years of living in the shadows, yesterday the Bay Bridge came into the spotlight. 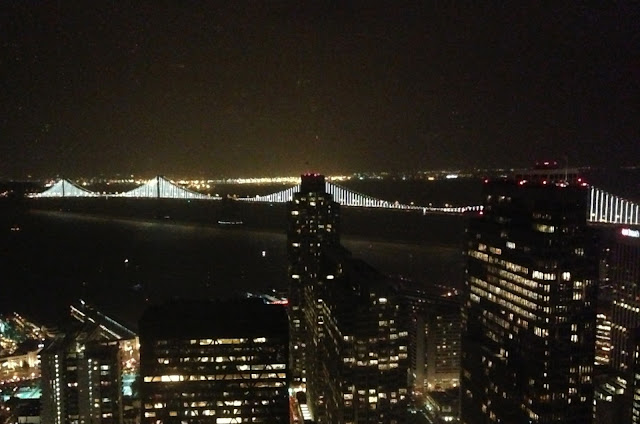 At 9 p.m., the 1.8-mile western span of the bridge became the world's largest Light-Emitting Diode (LED) sculpture, covered top to bottom in "25,000 undulating white lights." Artist Leo Villareal's "The Bay Lights" installation is being lauded for its contribution to public art, its potential to increase tourism revenue and the competition it now poses to the Bay's more famous bridge.

Thousands of spectators watched the unveiling (if that term applies, since Villareal activated the lights from his laptop). The City of San Francisco expects 50 million viewers during the installation's two-year run.

"It's brilliant," remarked Karen Nemsick, whose office sits directly beneath the Bay Bridge at Pier 28, after viewing one of the artist's test runs. "It's without a doubt the most spectacular thing I've ever seen."

Despite the slow drizzle that began half an hour before the unveiling, viewers filled the nooks and crannies of the waterfront and its piers. Cruises and bayside restaurants were sold out weeks in advance as people clambered to ensure a perfect view. From the top floor of the Transamerica Pyramid, I felt the significance of everyone's eyes turned away from the Golden Gate toward its less glamorous companion.

The bridge's new lights slowly began moving in apparent rhythm with the surrounding fog and waves. While the city seemed eerily quiet, social media channels captured the applause. The event created a sense of community around this seldom acknowledged piece of infrastructure. The Bay Bridge became a living work of art that viewers could connect with, discuss and remember.

Equipping the bridge with an LED display also captures a meaningful element of San Francisco history and culture. The installation combines art, technology and innovation — all important drivers in shaping the city we know today.

In comparison with the Golden Gate's iconic tradition, "The Bay Lights" speaks poetically of more-contemporary realities. This is a San Francisco that builds upon its history of Gold Rush settlers, Angel Island immigrants, beatniks, hippies, activists and public servants, while at the same time celebrating the rejuvenating energy of current artists, innovators, investors and all the misfits in between.

Emily Marsh recently completed a master's degree in Urbanization and Development at the London School of Economics and lives in San Francisco. She's currently pursuing a career in urban governance and neighborhood revitalization.