15 Points About the Underbanked 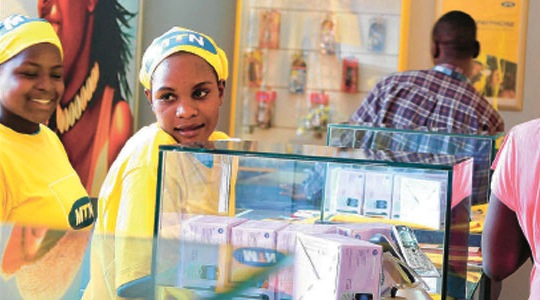 "Underbanked" is a bit of a buzzword in the financial services industry, but it rarely finds its way into popular culture. Different definers offer different definitions, but the most authoritative is that of the Federal Deposit Insurance Corporation (FDIC), whose National Survey of Unbanked and Underbanked Households defines it consistently in relation to "unbanked":

1. Unbanked: "Households that do not have a checking and/or savings account."

In casual language, the term "underbanked" usually refers to the "underserved" — individuals or households who don't fit neatly into the conventional financial services landscape. I offer a broader definition:

3. Underserved: The unbanked, the underbanked and all consumers who can't access credit because of poor, thin or no credit files, or face some other barrier to accessing financial markets.

Charts tell this story better than I can:

4. One in four U.S. consumers are unbanked or underbanked:

2011 banking status of U.S. households (percent). Percentages are based on 120.4 million U.S. households and may not sum to 100 because of rounding. *These households are banked, but there isn't enough information to determine if they're underbanked. Source: "2011 National Survey of the Unbanked and Underbanked Households" by the FDIC


5. The unbanked are disproportionately minorities: 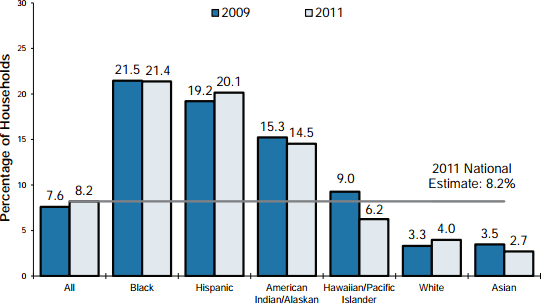 Unbanked households by race. Source: "2011 National Survey of the Unbanked and Underbanked Households" by the FDIC

7. Distrust: On Friday I ran into an acquaintance on the train to Boston and, when I pulled out my debit card to pay for my ticket, he remarked that he doesn't do that anymore. He had pulled his money entirely out of the system to avoid supporting big banks. While he is in a small minority, aversion and distrust are important reasons for the high percentage of underbanked. And distrust works both ways, as risk aversion and fear of default leads some institutions to tighten their lending rules.

8. Low rates, high fees: Both the public perception and the value proposition of financial institutions right now are near rock bottom. The Federal Reserve's "quantitative easing" measures drove down lending rates, the primary source of revenue for banks and credit unions, which in turn led to higher fees and lower deposit rates. Consumers now have to search for a deposit account that will earn them money instead of costing them money.

9. Regulation: Regulation isn't designed to hurt the underbanked, and some regulation, such as the 1977 Community Reinvestment Act, is specifically designed to help. Regulation is, however, designed to catch money-launderers and identity thieves, and reduce systemic risk. Identity verification and "Red Flag Rules" strengthened under the Patriot Act can prevent applicants with thin credit files — mainly young people, recent immigrants and low-income workers — from opening even a basic checking account. Basel III liquidity requirements may cause some banks to lend more conservatively, and Consumer Financial Protection Bureau (CFPB) oversight may cause them to raise fees to cover compliance costs. Talk about unintended consequences. 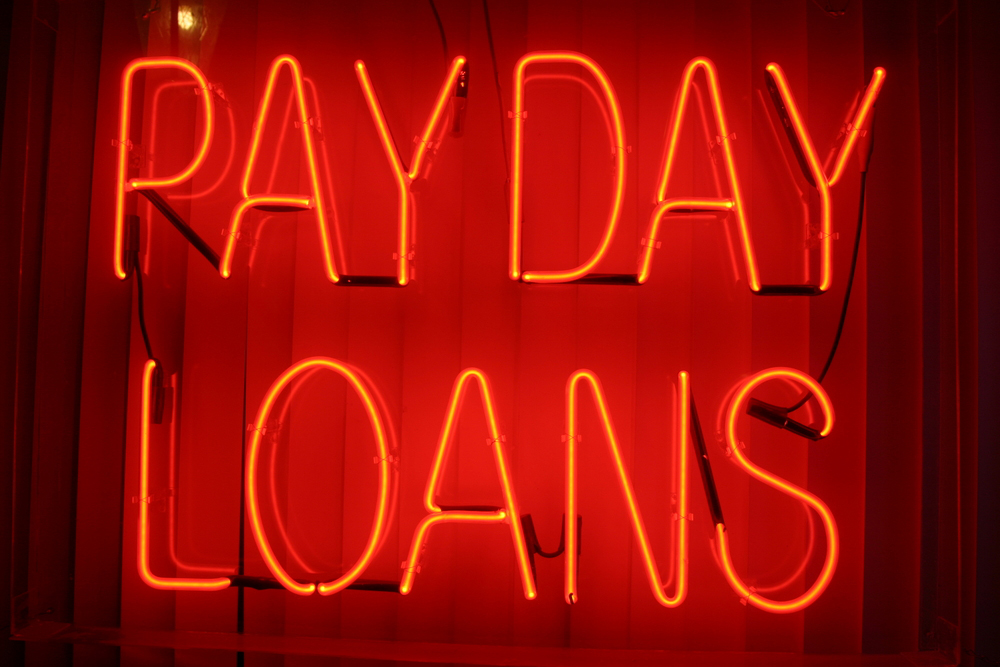 The "traditional" way to serve the underbanked is through Alternative Financial Services (AFS), including check-cashing, payday and tax-refund loans, rent-to-own agreements, subprime mortgage and auto loans, as well as person-to-person lending. Although not exploitative by rule, AFS have a bad reputation because need-based leverage, informal operations, local monopolies and information asymmetry allow AFS providers to charge high fees or lock the underbanked into burdensome debt agreements. I know of three interesting ways to serve the underbanked outside of AFS:

10. Alternative data: As mentioned above, many of the underbanked have thin credit files, which cause problems with identity verification and sometimes make them "unscorable" by credit data reporting agencies. Loan applicants with no credit score are usually denied credit, creating a Catch-22 in which applicants without credit history can't get credit history. It is possible to incorporate alternative data sources, including utility payments, phone bill payments, rental payments, remittances and other non-payment data into credit scores. A number of companies started packaging alternative data for financial institutions in the 1990s and 2000s with limited market penetration, but in the past few years supporting research by advocacy groups and careful integration of alternative data by major credit reporting agencies has helped bring alternative data into the mainstream.

A graph from the Policy and Economic Research Council (PERC) shows credit scores with and without the use of alternative data: 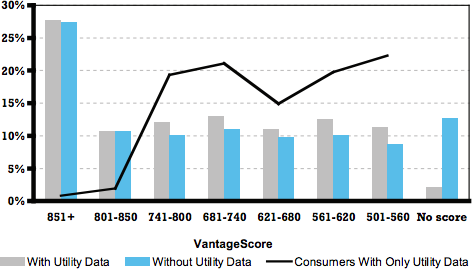 Distribution of credit scores for all consumers in sample with and without utility payment data and for those consumers with only utility payment data. Source: "Using Non-Traditional Data for Underwriting Loans to Thin-File Borrowers: Evidence, Tips and Precautions" by Michael Turner and Amita Agarwal

Incorporating alternatives to financial-institution payments into the score can help underserved consumers access credit. For more information, see "Give Credit Where Credit is Due: Increasing Access to Affordable Mainstream Credit Using Alternative Data" from PERC and the Brookings Institution Urban Markets Initiative.

11. Prepaid cards: Prepaid cards evolved from gift cards and government Electronic Benefit Transfer (EBT) cards as a way to pay unbanked employees. Private prepaid card providers emerged in the early 2000s, in some cases charging high fees and engaging in exploitative practices similar to those associated with AFS. Prepaid cards have generated much speculation recently with the launch of prepaid cards by major companies, most notably Bluebird by American Express and Walmart. For more information, see "Cards, Cards and More Cards: The Evolution to Prepaid Cards" from the Federal Reserve Bank of St. Louis. 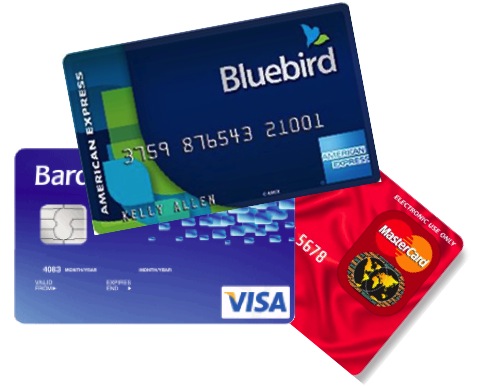 12. Mobile banking: Recently, a number of organizations and publications have touted mobile banking as a way of serving the underbanked. Many underbanked consumers have mobile phones — more than the number who have a personal computer or home Internet connection among some demographics. Mobile allows low-income consumers to access key financial services at a low cost, and also integrates with personal financial management tools to encourage smart spending and "financial capability." It also provides opportunities for peer-to-peer payments and peer-to-peer lending. For more information, see "Reaching Underbanked Consumers Through Mobile Services" from Celent and the Center For Financial Services Innovation.

13. Lifetime value: "Fortune at the bottom of the pyramid" aside, the underbanked have long-term potential greater than their short-term appeal. And remember, we're not talking about a few customers who slip through the cracks; we're talking about a full quarter of the population. Financial institutions of all stripes today are eager to lend, and offering credit to an underbanked but responsible consumer who would have otherwise used AFS can benefit both parties.

14. Catalyst for change: Cost-effectively serving the underbanked requires out-of-the-box thinking to lower the cost and increase accessibility of transaction services. Luckily, this is exactly the kind of thinking that banks should be doing anyway. Alternative data, prepaid cards and mobile banking are all tools that banks and credit unions can use to improve their service offerings substantially.

15. Macroeconomics: Standard economic theory says that entrepreneurs need access to financial services to obtain funds to innovate. Exclusion from financial services prevents would-be small-business owners from starting out and growing; it may also prevent the underbanked from pursuing higher education. Similarly, the burdensome interest rates and high transaction fees of AFS keep the underbanked in poverty, which hurts the economy and society at large.