Crowd-Sourcing Design: What Would You Change About NYC? 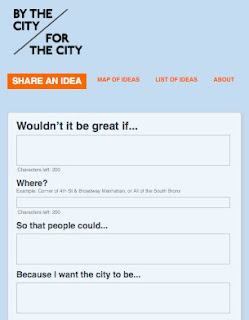 It began as a typical design competition. The Institute for Urban Design in New York would select five sites – one in each borough – and issue a call for proposals to architects and planners. Winners would be featured at the first annual Urban Design Week, a public festival that the Institute is planning, along with other partners, for September 2011. 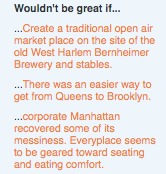 But members of the organization – mostly architects, planners and other design professionals – thought that sounded a little…traditional.

Thus was born By the City / For the City, a digital public forum that went live today. The website will be collecting ideas for bettering New York from anyone familiar with the city (you don’t have to be a current resident), whether citywide systems or just a block or two. Participants can geo-tag their idea on a map and share related links and photos. You can instantly track submissions in map or list form.

The method is basically crowd-sourcing sites for the international design competition, which will take place in May.

“We're categorizing the entries as they come in to figure out not only what scales most people think on when presented with an open call for ideas about their physical environment, but also to figure out what types of sites and situations are of greatest interest, and where,” said Brendan Crain, the Institute’s program coordinator.

The Institute will synthesize and analyze information from the public response and invite architects, planners and urbanists to create proposals addressing the challenges. Highlights will be on view at Urban Design Week (September 15-20, 2011) and appear in an “atlas” published in time for the event.

You have until April 30 to join the crowd.

Credits: Screenshots from By the City / For the City.