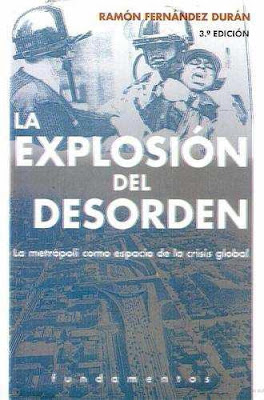 This post is a tribute to a prolific Spanish author and eco-social activist, Ramón Fernández Durán (RFD), perhaps the most important author behind Spain's current social and environmentalist movements. His carrer as a byword started with his book "the explosion of disorder" (1993), which had a large impact in the academic and environmentalists' circles and marked the way in a new leftist movement, different from orthodox traditional socialism. He introduced the Bretton Woods issue in Spain (origin of the World Bank, Internacional Monetary Fund and GATT) through his analysis of the modern economic regime in Spain and Europe and its spatial logic reflected in the metropolises.

He then published "against capital's Europe," which helped integrate the analysis of the dynamics of capital and power structures in the environmental movements. In 2001 he co-authored "capitalist globalization: struggles and resistance," analyzing the social movements around the anti-globalization demostrations that took place around the World preceding George W. Bush's catastrophic management of the U.S. economic empire.

In 2003 RFD was already foreseeing the real estate bubble that would lead to the crisis in Spain in his contribution to the book about urban agriculture "don't play with food". RFD continued his critical analysis of the World's urbanizing madness with "Spain's and the World's urbanizing tsunami", further structuring his prediction of the crisis through the links between the globalized financial capital and real estate production.

From then on, RFD focused in the evolution of energy use in humanity and the current environmental crises, which would culminate with his books “anthropocene,” in which he analyses the roots and prospects of today's multidimensional crisis that has energy as its backbone, and "breakdown of global capitalism", in which he suggests us to be ready for the beginning collapse of the industrial civilization.

Credits: I based this post on a tribute text by Iván Murray from the UIB.