On the first week of August a workshop was held in Quito on the topic gender and water with the aim of building capacities for mainstreaming gender in the Governance of the Water and Sanitation (watsan) Sector Program in Ecuador in the Framework of the MDGs. The workshop concluded with the development of provincial and individual action plans, which is the theme of this fifth post on Gender and Water. The main participants were four technicians from national ministries and twelve gender-committed people from the Program's four provinces. 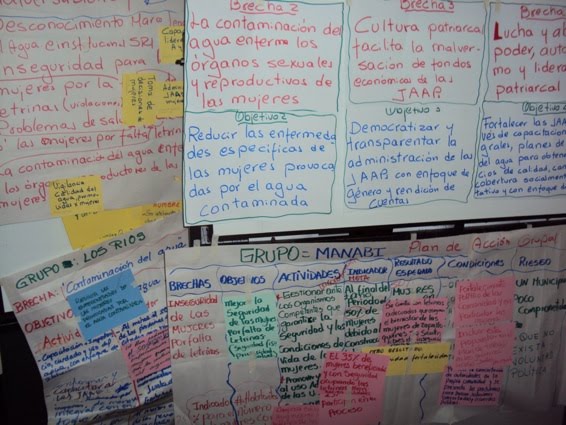 The planning exercise followed the results-based approach as the core of the project cycle. This planning method consists of identifying problems, formulating “smart” objectives (specific, measurable, achievable, realistic and time-bound), defining the expected results that lead to achieving such objectives, devising the indicators for measuring achievements/failures, planning the activities that lead to obtaining the expected results and considering the conditions that need to be in place.

The action plans developed during the workshop essentially helped participants acquire well structured arguments and critical understanding of gender issues in the watsan sector, which will help them integrate the gender approach in the watsan-related decision making processes in their provinces. Some of these action plans will be described on CoLab Radio on August 23.