Remembering Repression and Resistance in Barcelona

As is true of most of Spain, the province of Catalunya, and especially Barcelona as its capital city, suffered greatly under the Franco dictatorship, a period lasting from the end of the Spanish Civil War in 1939 until 1975. Catalunya was punished in particular because of its successful struggle for national autonomy and active anarchist movement and resistance before and throughout the Civil War. As the Republicans and leftist resistance faltered, Franco’s subsequent fascist dictatorship severely repressed any public activities, writings and even discussions in Barcelona and the greater province associated with Catalan nationalism, democracy and left-wing ideologies.


Although Catalunya has largely recovered its autonomy since the installment of democracy in 1978, the memories of repression and resistance live on throughout the province, particularly concentrated in the streets of Barcelona. Memorial Democràtic, a public institution whose purpose is to recover, commemorate and encourage democratic memory from 1931 to 1980, and the Generalitat's Department of the Interior, Institutional Relations and Participation have teamed up with Arqueologia del Punt de Vista - an organisation that recovers photographs of “unfinished history”, locates the place where they were taken and returns there to take more photos - with a photographic installation across the city raising the memories and reality of Barcelona's intense past into the present. Twelve life-sized photographs of historical acts of repression and/or resistance in various sites across the city – such as at the Portal de l'Àngel, Plaça de Catalunya, Plaça de la Universitat, Passeig de Gracia – have been placed in those spaces, enabling the viewer to engage with these historic displays of power and simultaneously their experience of the place at present.

The final image below is the photographic itinerary and map of the Repression and Resistance installation, running until 18 September. In case you can make it to the city, guided tours are also available on Saturdays. Check the Generalitat de Cataluyna’s website for more information. 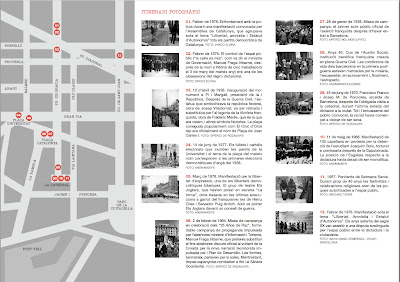