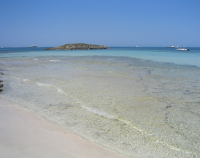 Ses Covetes is a sleepy little town forming part of the municipality of Campos on the edge of one of Mallorca’s most famous beaches called Es Trenc (photo at left), the longest stretch of undeveloped,

sandy white beach with crystal clear waters on the island. The unspoiled natural beauty of the area however stands in sharp contrast to the long abandoned, ghostly development where Ses Covetes meets Es Trenc, called Torre Marina (photo at right and below).

In 1994, the existing vegetation on the site was ripped up and construction began on these 13 beach-front apartment buildings, containing a total of 68 flats, by the developer Marina Ernst. The ruling right-wing Popular Party (PP) in the municipality of Campos had just previously changed the area’s classification to urban land, a status that enables construction 20 metres from the ocean’s edge, and granted the developer a building license. In vehement opposition a campaign was mounted and shortly after an appeal launched by militants from the Mallorcan Socialist Party (PSM) and the environmental defense group GOB on the grounds of the 1989 Coastal Law protecting the seashore for public use and prohibiting development 100 metres from the ocean’s edge. The PSM-GOB appeal stopped the development short in 1995, yet a complex judicial process has meant that now, sixteen years later, the buildings still stand, turning Torre Molina into an area known as Mallorca’s phantom development par excellence. 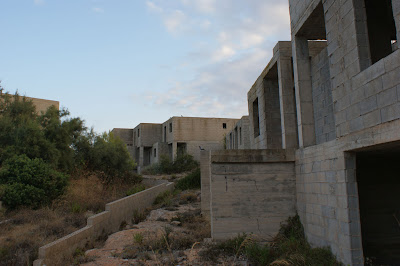 As of a few weeks ago, however, it appears that the eternal judicial process to demolish the buildings and restore the area to its natural state may be resolved sometime soon. Seventeen favourable sentences have been declared since the case began in the courts in the mid 1990s, and just recently the Supreme Tribunal Court stated that the original license granted to the developer by the PP government was illegal as it affected a public maritime-land domain. According to the current mayor of Campos, from the independent Campos for Change (CpC) party, the final element to resolve is whether or not the land in question can be classified as urban. In contrast to the PP, the current pact between ruling political parties (CpC-UM – the Mallorcan Union party) is to stand in opposition to the development, in part to alleviate the delicate state of their coffers: up to 2007, largely under the PP, the municipality has spent over 600,000 euros siding with the Marina Ernst to defend the development.

While this means that there an extremely small likelihood that the development will ever be completed, who will take responsibility for its demolition remains unclear. Marina Ernst is asking for 27 million euros in compensation according to an ‘independent valuation’, and have said that they will take the case to the European Tribunal if they are not given the money. The municipality’s mayor and advisors have contracted a company to study Marina Ernst’s compensation demand, and it will supposedly be determined by September whether the amount is fair, if the municipality needs to repay the developer and/or what institutions will contribute. 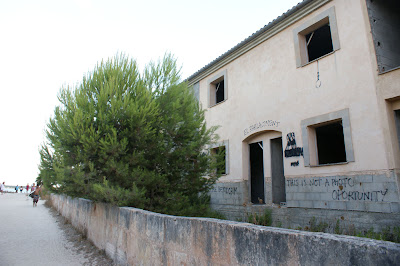 Until then the graffiti strewn across the half-finished structures will continue to tell passers-by on the way to Es Trenc – thousands in July and August – the story of Torre Marina: “future for sale,” “roots are not born from cement,” “guilty municipality” and one of my favourites “today is the tomorrow we were promised yesterday.”

Credits: Photo of Es Trenc by Dani Munsó from todospueblos.com. All other photos by Melissa García Lamarca.