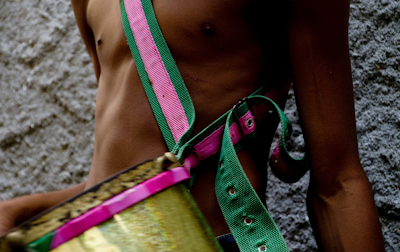 During the last violent week in Rio de Janeiro, major media-channels have been talking about an urban war, describing the favelas as notoriously dangerous shanty towns, and interviewing commuters rather than the people in the affected neighborhoods. As Amnesty International is urging the Brazilian authorities to act proportionately and respect the human rights, additional images of the capital to be spread towards the international community are indispensable.

The 2010 film The Samba That Lives Within Me takes the audience to a Rio de Janeiro beyond favela drug wars and glossy carnivals. In this engaging documentary, the Brazilian director Georgia Guerra-Peixe interviews a number of inhabitants of the Morro da Mangueira neighborhood, from the old woman with 168 great-grandchildren to the man who never left the site, but hopes to someday make a difference.

As the samba parade flashes by on the tv-screen in the local bar, the Mangueiras unravel their life stories. "I didn't get any information without exchange," Guerra-Peixe said after the Monday screening this week at the Stockholm International Film Festival. "I told them about my life, and they told me about theirs."

Focusing on details of everyday life, the photo is one of present stillness. In combination with the director's determination of sharing also her vulnerability, it makes an important addition to the 2010 image of Rio. "Where were you watching my film?" Guerra-Peixe asked the festival audience. "Did you feel like spectators, or did you stand on the street?" The latter, we answered. "Good," said Guerra-Peixe.