Where Is the Press Free? 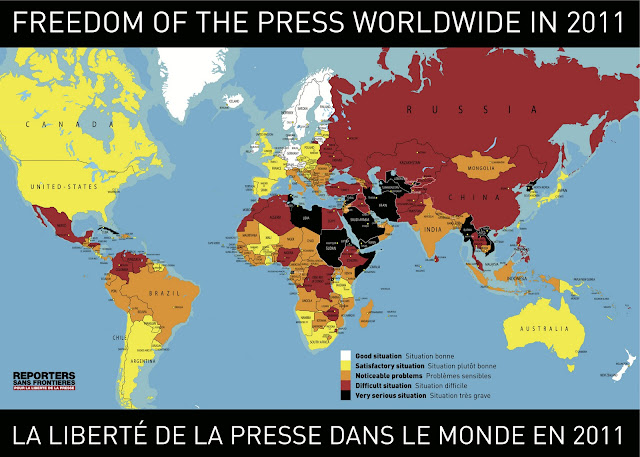 Where in the world is it best to be a journalist? Scandinavia, hands down. Japan’s pretty good, the United States is alright. Better to be in Jamaica than Poland or France, and South Korea is far preferable to Turkey or Russia. Journalists in Eritrea fare the worst, with those in Iran and North Korea not far behind.

These are the findings from the 2010 Press Freedom Index, released last month by Reporters Without Borders. The annual rankings assess freedom afforded to journalists and news organizations in almost 180 countries. The organization compiles the index by measuring violations against journalists and the news media, as well as considering the legal framework for media and incidences of “self-censorship.”

It’s unclear how reliable the methodology is in assigning specific rankings, but it is surprisingly clear that there is no strict correlation between press freedom and level of economic development, geography, religion or, to some extent, political system.

“More than ever before, we see that economic development, institutional reform and respect for fundamental rights do not necessarily go hand in hand,” Reporters Without Borders secretary-general Jean-François Julliard said.

Many European countries have been dropping in the rankings, with Italy ranked 49th, Romania 52nd and Greece and Bulgaria tied at 70th.

Of course, a free media is crucial for keeping people informed, presenting competing views of development and keeping decision-makers in check. It makes you realize that a free press shouldn’t be taken as a given in more developed countries, even those that gave birth to modern democracy.