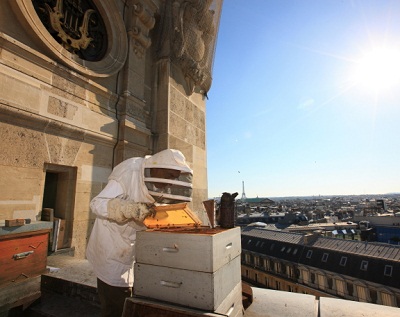 With the world decline of honeybee population, an unexpected habitat is booming: the urban bee. Cities around the world --like London, Paris, Tokyo, New York City, and San Francisco--are becoming the home of urban beekeepers. Ironically, by some measures, urban apiaries are doing better than their rural couterparts. In many urban areas pesticides have been banned, making it easier for bees to survive. The diversity of flowers found in city gardens, parks, roof terraces, and balconies, offer a more varied and constant (albeit smaller) nectar source that than the monoculture flower crops typically found in rural areas.

In Europe, the practice of urban beekeeping has a longer history. In Paris, which is becoming "the queen of the urban apiary world", beekeeping goes back more than a century. Now apiaries are spread across the city in rooftop gardens of apartment buildings, balconies, and important institutions such as the Paris Opera House and the Grand Palais.

In the worlds most densly populated cities, it is difficult to imagine urban beekeeping is even possible. In concrete jungles like Hong Kong, where parks and gardens are limited and the roof tops are mostly underused a nascent beekeeping society is found. Last year HK Honey, an organization of beekeepers and designers started to extend the practice throughout the city. Besides promoting the use of local honey, HK Honey designs honey and wax related products and teaches the practice of urban beekeeping with the goal of extending it throughout the city.