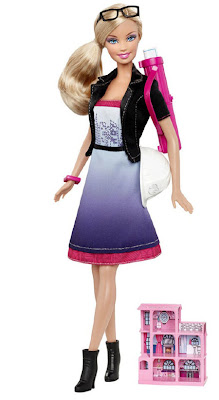 Last month, Mattel revealed that Barbie will finally be an architect. The latest in a series of more than 120 professional personas, she will appear in stores later this year.

In a field where women are still vastly under-represented (they make up only 17 percent of The American Institute of Architects’ members), this is a step forward in putting “architect” in the vocabulary of little girls. For better or worse, Barbie remains very popular – her sales saw their biggest increase in a decade in 2010. In our consumer culture, there may be no better way to make a mark on the collective consciousness.

Architect Barbie almost never was. In 2002, the first time she appeared on Mattel’s poll to pick Barbie’s next career, she won the public vote, but the company never produced the doll.

When Architect Barbie reappeared on the ballot in 2010, Stratigakos, along with Kelly Hayes-McAlonie, president-elect of AIA New York State and a biographer of one of the first female architects, wrote a letter to Mattel advocating for the doll and campaigned for votes. Although she lost out to Computer Engineer Barbie, Mattel contacted Stratigakos and Hayes-McAlonie last July, announcing it would move forward with the doll and requesting their advice on designing her clothing and accessories.

“We wanted Architect Barbie to be both recognizable as an architect, which meant drawing on popular conceptions, and yet also challenge those conventions,” Stratigakos said. “Who said architects can’t wear pink?”

Stratigakos believes that the doll can stimulate a healthy examination of women’s roles, whether in the toy store or among professionals.

“Barbie is a cultural icon with the power to provoke conversations. We could image a conversation at the toy store between a girl and her parents about the roles of women in society today. But we also hope the doll will prompt those in the profession to reflect on issues of identity and image, particularly with regard to exclusions.”

Some have taken issue with Barbie’s pink-fringed skirt and impractical high heels. But her outfit can be seen as a political statement.

“A hundred years ago, when women first entered the field, their detractors argued that architects couldn’t wear skirts,” Stratigakos pointed out. “How far have we come since then?”