The Multicultural Youth Tour of What’s Now (Mytown) aspires to use the power of community and cultural history in Boston to inspire youth to be leaders for social change. 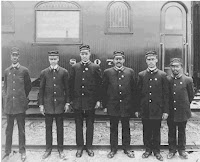 Mytown’s creator Karilyn Crockett founded the organisation in 1995 as a young African-American woman growing up in Boston and feeling disconnected from the city, only learning about mainstream history such as the ride of Paul Revere and the Boston Tea Party, stories that never addressed the lives and struggles of so many people that have sought social justice in the city and broader American society for generations. Upon hearing about stories of community organisers creating the first African-American labour union in the country in 1925 (the Pullman porters, image above right) and struggles against urban renewal in the South End and Lower Roxbury, Karilyn began to understand the legacy of people that have struggled to positively transform the city and beyond over the past 350 years. She started to feel a sense of ownership and belonging to/in the city, feeling that Boston was indeed a city shaped by the experiences of her family and neighbours, a place that she could call “my town.” 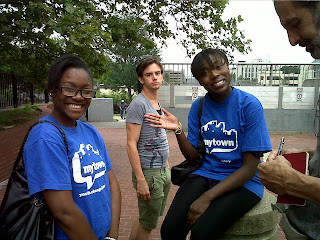 A grant from the Echoing Green Foundation enabled Karilyn to realise her vision of a programme using the process of sharing local history to empower young people and build appreciation of urban neighbourhoods. Youth Guides, aged 14 to 18, research their local and personal history and then teach what they have learned to the public by developing and leading tours of various parts of Boston. Since the start of Mytown this work has led to the creation of more than 200 jobs for Boston teenagers who in turn have educated over 10,000 residents and visitors in neighbourhoods across the city. 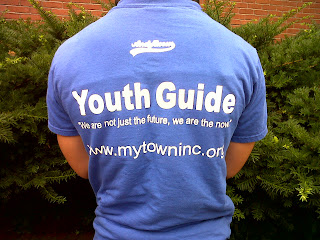 History is almost always told through the eyes and by the experience of the ‘winners’, the richest and the most powerful in societies at all scales, from local to global. Mytown creates an amazing space where youth can take this back, an empowering process that inspires themselves and most definitely others about the legacy and potential of socially just and sustainable places and spaces in the city.