Politics and Consultation in the Reform of Barcelona’s Diagonal

Avinguda Diagonal as it is officially known in Catalan – Diagonal Avenue – has been at the centre of much debate in Barcelona in recent months. The 11 kilometre long, principle avenue of the city that cuts the Exiample, as designed by Illdefons Cerdà in the mid 19th century, has stayed largely the same for the past 100 years despite the fact that transportation needs have changed dramatically. Now there is so much traffic congestion of all sorts and public transport is so battered that riding one of the many buses traversing the Diagonal takes (in record time) one and a quarter hours to cover 8 kilometres. Considering that mobility studies have shown that 46% of movements within Barcelona are by foot or by bicycle, 35% by public transportation and 19% by car, in recent years it has been recognised that reforming the Diagonal would benefit the majority of the city’s population. 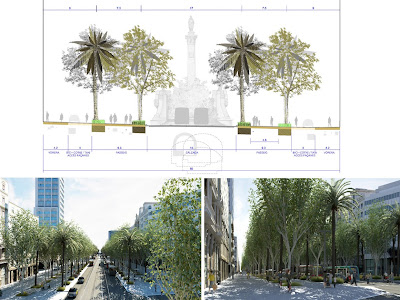 In February 2009 a city-driven citizen information and communication phase began around transforming the Diagonal, where, according to the Barcelona City Council website, from June to September 2009 sectoral round tables, neighbourhood round tables, and debate workshops in schools were held, with 30,000 people participating providing 175,000 contributions. Such inputs were used to prepare the March 2010 launch of two proposals for the reform of the Diagonal: option A (image above) with lateral boulevards, a tram in the middle and one way lanes for cars on each side and option B (image below) with a central promenade, trams on the sides and two lanes for cars in each direction (here is a video illustrating both the designs in more detail). Both proposals give preference to public transportation, pedestrians and cyclists, relegating the car to second priority. 70,000 more journeys per day would be permitted with these new plans, up from the current 400,000. Total reubanisation costs for both options, a total of 260,000 square metres, would be around 70 million Euros, where the tram infrastructure adds another 54.5 million Euros in option A and 65.5 million for option B. 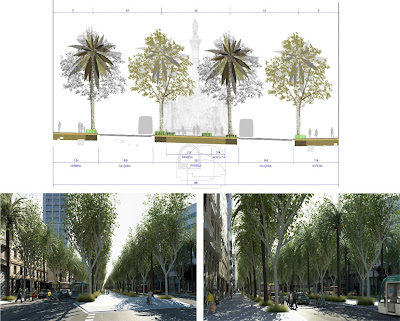 Yet the final phase of public consultations culminating in a vote on options A, B and C (that the Diagonal stays as it is) recently held from 10 to 16 May have been judged by many to be a failure: option C was selected by 80% of the 172,161 people who voted – just 12% of residents registered with the municipality as of 1 January 2010, 16 years or older. An outcome foreseen through surveys in September 2009 as well as March of this year, where the 65% and 86% respectively felt that the Diagonal should be left as is, it has sparked a political crisis with the socialist mayor Jordi Hereu firing the deputy mayor and in recent days many asking for Hereu’s resignation.

A serious concern for many residents of Barcelona is the cost of such a project when Spain is in the midst of a major economic crisis, as well as, according to Joshua Silva from Ecomovilidad, the political motivation behind such a project with elections coming up in Spring 2011. Most of the 15% unemployed workers in Barcelona are in the construction sector, and clearly such a project would stimulate and generate work in this area of the economy. Furthermore the project kept moving forward and over 2 million Euros were spent on the consultations when various surveys months before the official vote illustrated that most people want the Diagonal to stay as is – or that they perhaps want the development of an alternative transformation project?


According to Greenpeace Spain, there was an important deficit in communication about the project that meant that residents of Barcelona were not well informed, with focus placed on costs, how long construction would last or how traffic would be re-routed rather than key issues such as the capacity of the new public transportation system, how non-motorised transportation would absorb a significant amount of actual demand or how the proposed options would reduce pollution, carbon emissions contributing to climate change, accidents and noise. At least for now, it looks like the Diagonal is staying as Cerdà planned.