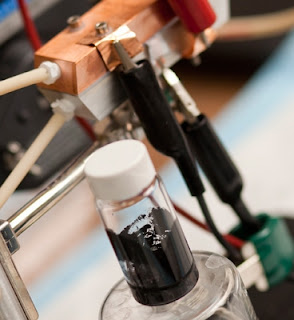 In 2003, New Jersey Transportation Commissioner Jack Lettiere pointed out that transportation had to be “factored in at the earliest stages of project development” in order to prevent sprawl. He was referring to public transportation’s pivotal role in the creation of sustainable, walkable neighborhoods. Compared to many parts of the world, public transportation is not widely used in the United States. Despite rising gas prices, this trend has stayed relatively constant. A new type of fuel, dubbed "Cambridge Crude" by its developers at MIT, could either change or perpetuate this way of living.

“Cambridge Crude” is a liquid fuel that carries electrically charged particles. The fuel seems to have great promise in a variety of fields, providing an alternative to batteries for electric vehicles and the power grid. It could refuel cars just like gasoline, reinvent the rechargeable battery, and make wind and solar energy practical for powering the electric grid. With its potential to change how energy is provided, how might “Cambridge Crude” change cities?

When oil prices rise high enough, people are more likely to switch from personal automobiles to more public modes of transportation. This could be accompanied by high-density, mixed-use living arrangements. In Europe, where gas prices are on average 1.3 times higher than in the United States (think over $6 per gallon), many cities are transit-oriented and pedestrian-friendly by design. Gas and parking fees are effectively prohibitive for large sectors of the population. 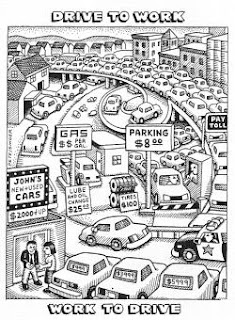 Researchers say that "Cambridge Crude" will be price-competitive with conventional fuels. Assuming that the price of new automobiles is not astronomical, people will have little incentive to switch to public transportation. High gas prices in the United States have yet to bring substantial changes in public transportation. Car culture runs deep, presenting a serious impediment to smart growth policies that reduce urban sprawl.

“Cambridge Crude” has the potential to perpetuate inefficient forms of transportation. But if used in conjunction with better planning strategies that focus on smart growth, it could also make cities more healthy and sustainable.

Yolanta Siu is a Polis intern.