Art and Activism in Forgotten Alleyways 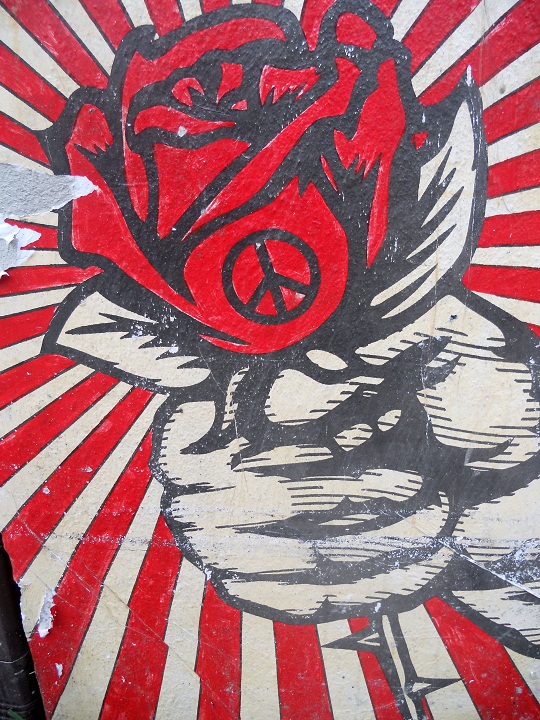 In Washington, D.C., it can seem that everything follows a pattern of professionalism, from the street grids to the meticulously chosen ties and heels of those off to their 9-to-5s. The city seems to lack the spontaneity of other busy cities across the United States. But don’t let the suits, sunglasses, and politics fool you: This city is bursting with a subaltern identity that appears in alleyways, behind street signs, on newspaper bins, and inside metro trains. This is the world of street art. Using stencils, stickers, spray paint, and the city as canvas, street artists actively engage with urban environments, challenging the public belief that street art is solely a form of vandalism used by gangs.

It was a hot day after work when, like Alice in a Wonderland of concrete, I managed to get lost in the perfect street grids of D.C. and find myself passing a long alleyway with many different styles of graffiti. This treasure trove of murals was actually part of an installation by the Irvine Contemporary Art Gallery, featuring artists EVOL and PISA73 from Berlin, Gaia and Oliver Vernon from Brooklyn, and Obey from Los Angeles. In the installation, titled Street/Studio, artists used both private studio spaces and exterior spaces, like the alley, to display their work.

It is inspiring to see art venues like the Irvine Contemporary Gallery legitimizing the voice and vision of artists whose work is often labeled illegal, violent, and destructive. As Jeff Stewart points out in his article “Graffiti Vandalism? Street Art and the City,” graffiti and street art are commonly seen as out-of-place physical representations of stigmatized people that “must be erased in order to return the social space to its proper condition.” Attempts to control social space by manipulating physical space have effectively separated communities with high socioeconomic status from the poor, and given rise to gated communities, ghettos, and polarized suburbs.

The artists featured in the alley undermine polarizing forms of control over the built environment. Obey (Shepard Fairey), known for his Andre the Giant stencils, often responds to current political and social ideologies. In a 1990 interview, Obey commented on public reactions to his work: “Whether the reactions are positive or negative, the stickers’ existence is worthy as long as it causes people to consider the details and meanings of their surroundings.” Critical of advertisements on billboards and the media that the public eye subconsciously consumes on a daily basis, Obey creates his own brand of propaganda, like "Rose Girl," "Toxicity Inspector," and the "Duality of Humanity" series, in hopes that people will stop to think. 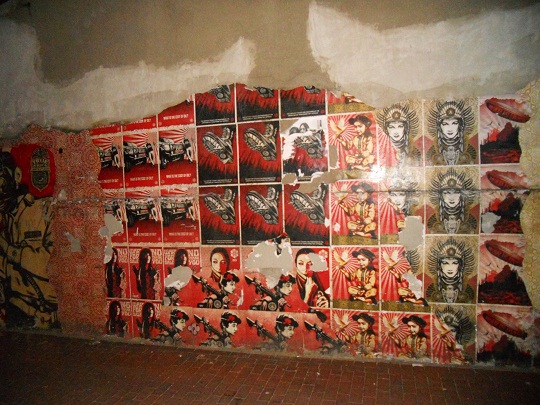 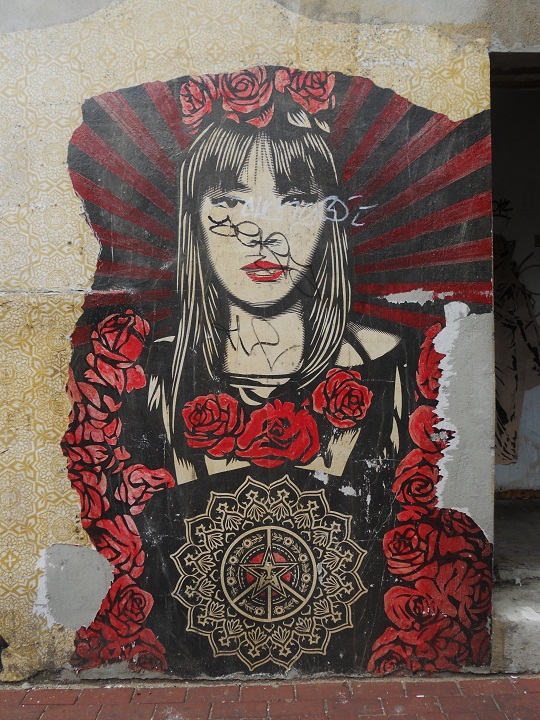 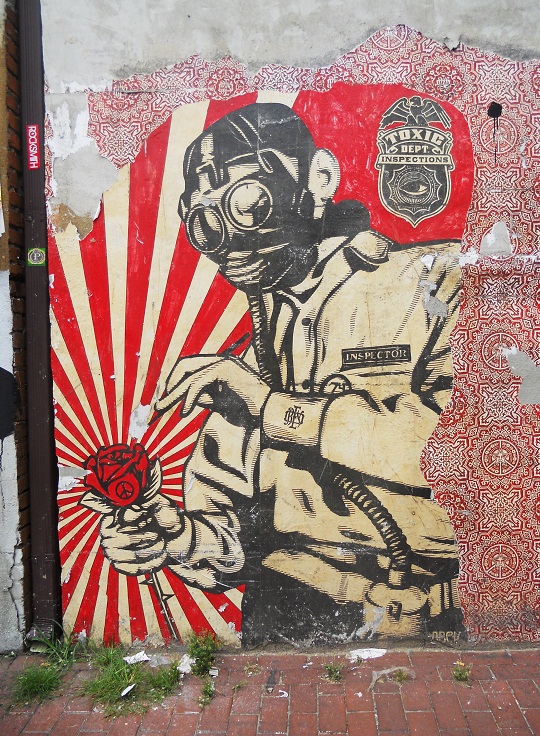 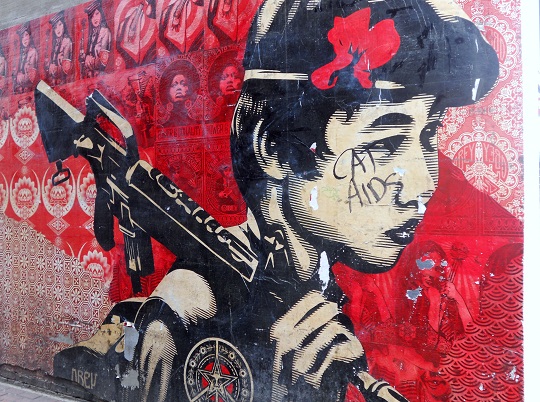 "Duality of Humanity" by Obey.

Oliver Vernon produces 3-D installations to convey the loosely ordered chaos in everyday urban environments. Using basic shapes like circles and straight edges in a spontaneous and organic style, he abstracts the planned city and depicts the impulsive tendencies that cities cannot possibly plan for, like graffiti. He keeps his work open-ended, inspiring observers to move their eyes around each piece and actively create their own meanings. His paintings conjure a built environment that is flexible enough to adapt to constant change. As Stewart remarks, graffiti “highlights the fact that a city is dynamic and that it reflects a tension between the needs of those who live, work, govern, and play within its precincts.” 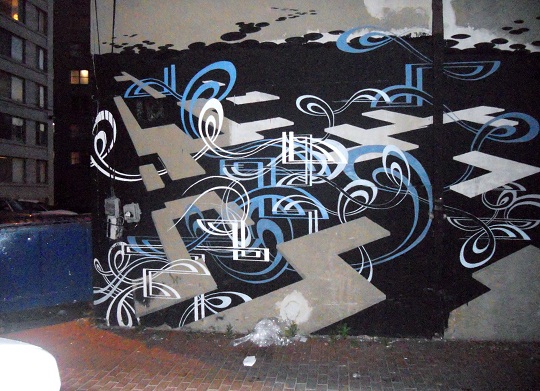 A wall by Oliver Vernon.

Artists PISA73 and EVOL work together in the street art collective CT’INK. PISA73 takes photos around the world, making stencils of the images, and imprinting them on concrete surfaces. His image in the alley, titled “IMG_4111.CR2,” was taken in Berlin a few months before the installation. It suggests a global citizenship, in which a specific space and time in history can be recreated in virtually any neighborhood around the world. 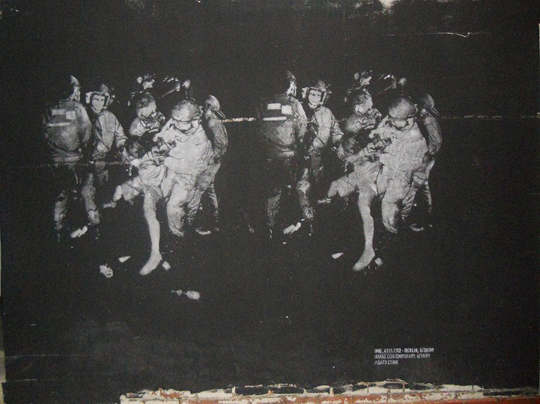 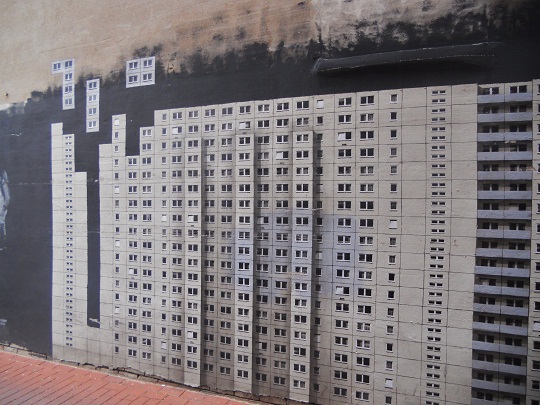 I was most intrigued by Gaia’s "Double Rooster" and "Portrait of Le Corbusier." Gaia, whose alias is drawn from the Greek mother-earth goddess, centers his pieces on urban nature. Having lived in New York City all his life, his work reflects struggles behind the ideal of pure nature and the urban landscape. The Le Corbusier portrait, accompanied by the quote “We must refuse to afford even the slightest concession to what is: to the mess we are in now,” is part of Gaia's Legacy series. 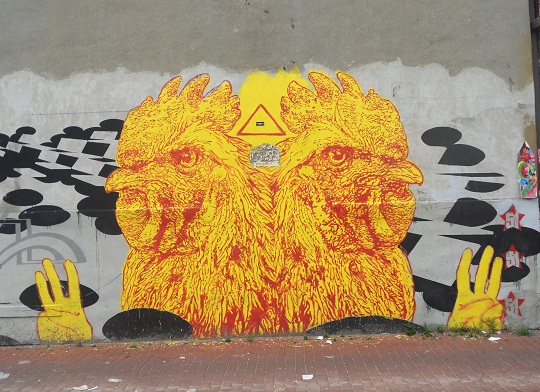 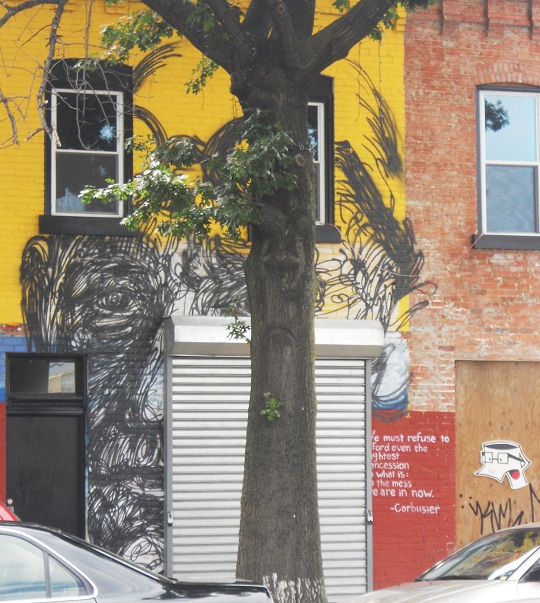 "Portrait of Le Corbusier" by Gaia.

Observing urban surfaces reveals unlimited surprises. Street art is one of many creative uses of public space that inspire curiosity and wonder each day in cities around the world. It contributes meaningfully to urban experiences and subverts attempts at social control by way of the built environment.