“This is the city and I am one of the citizens, whatever interests the rest interests me.”

With this quote, Belgian graphic artist Frans Masereel unveils “The City: A Vision in Woodcuts.” Masereel, who became known for his pacifist anarchism, achieved with this 1925 woodcut series an uncanny precursor to the modern graphic novel. 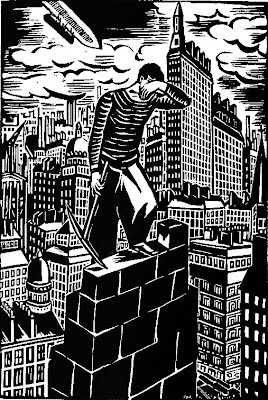 Almost a century after its publication, "The City" remains an emblematic representation of urbanism pertinent to our times. In their simplicity and starkness, Masereel’s woodcut plates exude a primitive attraction as essential and direct as any photojournalistic endeavor. The images' accessibility in both substance and form makes "The City" not only an artistic exemplar but also an iconic record of urban life.

Masereel’s visual essentialism bears forth in monochrome purity. Each piece works as an individual composition depicting the banalities of everyday life, captured through infrastructure, buildings and architectural artifacts. The city never escapes the viewer or the protagonist inside the swift graphic narrative. Mystery, joy, horror, hope and failure come alive in intimate and public spaces that frame an idealized city. Upon deeper reflection, each of us can recognize this city through our surroundings, paths and gazes.

Masereel’s city is our city. The colors, techniques, characters and artifacts may have changed with time, craft and technology, but the story of winners and losers remains the same. Each page of "The City" turns with ethnographic honesty and fervor, illustrating the social hierarchies systems, bureaucracies, rituals and practices that define urban life.

What questions or responsibilities does Masereel’s city — with its vice and splendor, frailties and vigor — offer us? I return to Masereel regularly to gain inspiration from the clarity of its aesthetic precision and ponder the questions that guide my research and practice.

Credits: Drawing from The City: A Vision in Woodcuts.