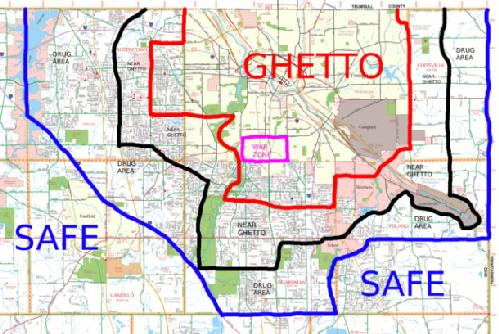 The American Internet is atwitter after Microsoft announced last week that it had patented a mobile application technology giving pedestrians directions that avoid high-crime areas. An early story from a Seattle TV station dubbed it the "avoid ghetto app," and the avalanche began. Twitter is exploding with links to tech blogs, witty 140-character opinions and links to online debates: Is it racist? Does it protect women?

MSNBC, which is owned by Microsoft, attempted to weigh in on the budding controversy by mentioning that they never used the term "ghetto." An AOL reporter actually did some reporting, talking to experts who compared the tool to redlining and found it "appalling" and others who said it was "creepy" but useful.

What makes this issue so complex is that Microsoft is using highly fallible technology to replicate an existing practice that is itself both problematic and practical. People are writing about the app not only because Microsoft is using crime data to mark communities "to be avoided," but also because this mimics something most city residents do already.

Whether we like to admit it or not, we avoid certain parts of the city — especially on foot, especially at night and especially if we are carrying something valuable. When friends visit, particularly women, we advise them on safer routes or offer to pick them up in a car if an area is dangerous. We keep an eye out when we move about the city, looking for signs of trouble. This is called "street smarts," and it is practiced not just by middle-class white folks but also by low-income residents, people of color and tough guys. Staying in one piece in many communities involves knowing which blocks to avoid.

Is Microsoft's app a problem even if it replicates a common practice? Yes. Here are a few of the many reasons why:
Perhaps we should be thankful to Microsoft for raising a much-needed debate. Chinn made the not-quite-tongue-in-cheek suggestion that a better app would help young men of color identify areas to avoid getting profiled. Instead, how about an app that points out areas that you may avoid because you imagine them to be dangerous, but that are in fact relatively safe to explore?