Who is to Blame for Evictions in Spain? 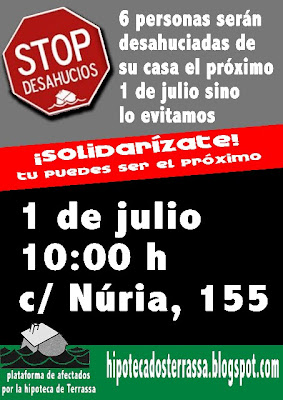 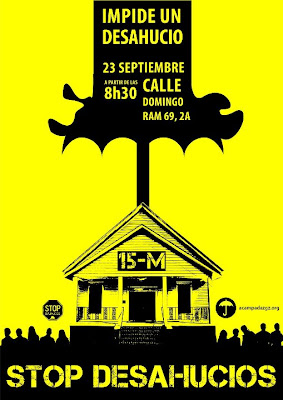 Announcements of solidary actions against evictions in Barcelona and Zaragoza, Spain. "Desahucio" means "eviction" in Spanish.

More than three years after the beginning of the global economic crisis, Spain continues to fall without a visible end. One of the most traumatic effects in this country has been evictions. Since 2008, there have been more than 150,000, according to official figures; some NGOs say there have been more than 300,000. Although many evictions counted are actually parking lots, industrial premises, beach houses or flats in empty real estate developments, that still leaves tens of thousands of families in tragic situations. Most of these families used to be middle class and are now below the poverty line.

Most local newspapers report on conflicts between poor families and banks, telling of families that bought a home with a long-term mortgage with low (but variable) interest rates. When one or more family members found themselves unemployed and unable make payments, banks could claim the property plus the difference between the amount owed on the property and its current value (often one-third lower than the original price). This has left families not only without jobs and homes, but also with massive debt to be repaid across decades. At the same time, national and local governments are making massive cuts to social welfare because of public debt. 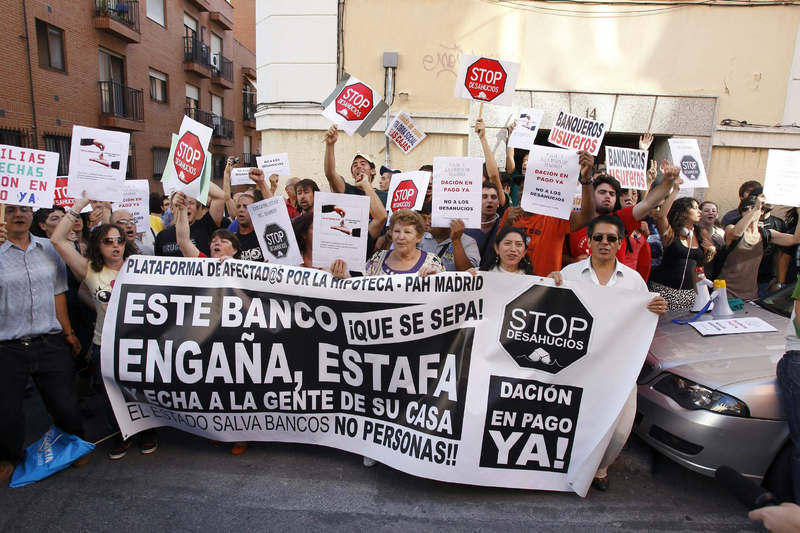 In reality, the situation is more complex. Many cases involve real estate speculators and white collar thieves who told families that it did not matter if they couldn't afford a home — they could sell it later and supposedly make a profit. They praised the wonders of the Spanish economy and claimed real estate prices would never go down. Some bank employees and real estate agents hid costs or lied about the conditions of the business, while others omitted information that would have discouraged many from getting into the mortgage.

The common Spanish citizen became part of a widespread culture of speculation, with many families taking out a mortgage because it was a profitable business. It was an excellent business indeed — but only for those who sold before the crisis. In the end, most houses were bought and sold by individuals; banks and real estate agents were just intermediaries that facilitated transactions and anticipated payments. Those who sold overpriced properties cannot be blamed for it, although they are unquestionably part of the problem.

The law is clear, and many people signed their mortgages irresponsibly. However, there has been a gross lack of ethics, as many abused people's ignorance and innocent confidence. Self-professed experts in power who misled almost everyone on the real fate of the world's economy share in the responsibility. This is what the 15M movement in Spain and the Occupy movements across the world are protesting. They are also decrying the irresponsibility of public institutions that have the capacity to control dangerous economic bubbles, such as the one that provoked the global crisis, but did nothing for fear of affecting market confidence or investment flows. The crisis was predicted numerous times, but they did not listen. Now those who lost everything ask, "Why didn't they tell me this could happen?"