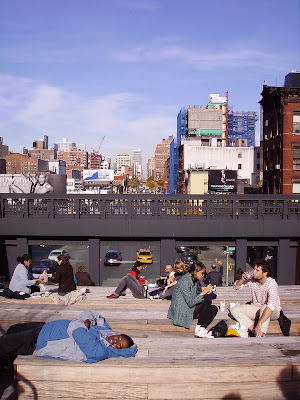 Concrete jungle where dreams are made of,
There's nothing you can’t do,
Now you're in New York

Glorified, Vilified, Gentrified goes the ad campaign which greets you on the gangway at JFK, all three words siting under the same image of the Brooklyn Bridge. It is wonderfully ironic that an advert selling global finance captures the mixed emotions of a city like New York so well, but such is the way of the Gran Manzana in these early stages of the 21st century.

My love of New York is hard to separate from my love of cities - from a three year old on the subway on the way to visit his grandfather to a twenty-something hipster crawling through the confines of a changing Brooklyn, so much of what I love and hate, admire and fear about the urban experience was formed in and around this most iconic of places. It is also the space is which my urban politics was formed, where I learned to see how and for whom space and place were made in the contemporary metropolis, to temper my enjoyment with a tinge of sadness, much like the drops of wine at a passover seder to recognize that rebirth often comes at the expense of others. 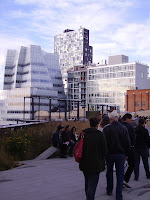 This constant encounter with the double-edged sword, when combined with a life as a semi-professional urban critic, makes loving new urban space unabashedly somewhat difficult. But on a recent trip back to New York, I had an almost mystical experience on what is truly a gem of bourgeoise urban life, the High Line. It is truly a magical place, some sort of postmodern fantasy where you literally feel like you are in a rendering, tying together the neighborhoods forays into contemporary architecture into a sensical whole. It is active yet peaceful, open and inviting yet with innumerable nooks and crannies in which to wander and get lost, even though it is currently only ten blocks long. It is a flaneurs paradise, for it is a space with no other true purpose than to experience the city as city. 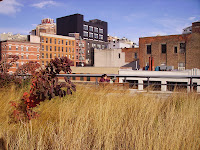 They could have done it so poorly - rather than following the lead of Paris's Promenade Plantee, one could half expect an open-air mall or some brutalist concrete expanse, rather the naturalistic wonder that will perhaps return landscape architecture to its once prominent role in American citymaking. (It is now autumn, and the native grasses turn a brilliant California beige which play off the multihued brick of Chelsea in a surreal way)

8 million stories out there and they're naked,
cities it's a pity half of y’all won’t make it...

Yet even amidst my reverie, there is always another side. The High Line owes its existence to the power of private fundraising and the Economic Development Commission, not the Parks Department and the public good. It is maintained and controlled not by public servants but by employees of the non-profit Friends of the Highline, whose campaign to create this gem was instrumental in pushing a reluctant city to see what was possible. But the story here is not about the privatization of public space, although that is something to keep an eye on, but rather that the infusion of private money into public green space continues to maintain an unequal distribution of urban amenities. Both of Olmstead's wonders, Manhattan's Central Park and Brooklyn's Prospect Park, rely on private non-profit "alliances", as do many other urban oases in the City. Fresh from their impressive feat on the west side, it would be wonderful to see New York's monied classes put the same political and financial pressure on the city to realize another urban fantasy for an underused piece of transportation infrastructure - the Sheridan Expressway.

Conceived more than a decade ago by residents, planners and activists in the South Bronx, the Sheridan community plan not only would provide open space and flaneurie but affordable housing, jobs and space for new businesses for residents of the poorest congressional district in the United States, where 42.2% of residents lived below the poverty line in 2000. It is a vision whose time has come, one that could provide the Boogie Down with a community-driven greening to rival the High Line. Perhaps Adolfo Carrion, former Bronx Borough President and now head of the White House Office on Urban Policy, could help spearhead the effort as retribution for his participation Yankee Stadium redevelopment, the worst example of a top-down fleecing of a neighborhood since the heyday of urban renewal. Then we could truly celebrate the fact that ... now you're in New York.

Credits: Images of the High Line from Alex Schafran. Lyrics (in italics) from "Empire State of Mind" by Jay-Z and Alicia Keys.