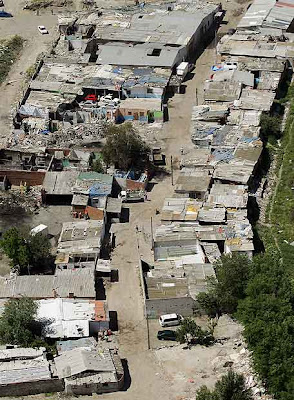 Spain is a good example of how the challenge of slums is not exclusive of developing countries. Indeed, despite that Spain has had an outstanding economic growth index in the years previous to the Crisis and its good average living standards, it is not a slum-free country. This is because numerous cities and towns have not been capable of ensuring all their residents’ right to the city. Every place has its own history of poor urbanizations, where thousands of people have been denied the right to develop themselves or to influence the cities’ development. There are cases like Madrid (video in Spanish) and Sevilla (video in Spanish), where mostly gypsies live in extremely precarious and unsafe conditions, facing regular situations of racism and social exclusion. There are also cases in southern desert towns where tens of thousands of immigrants live in shacks amid the sea of plastic green houses, working (many of them illegally) in the anti-ecological production of the vegetables that are cheaply consumed by half of Europe, and are victims of random police-led violence (video in Spanish). There are also many cases of degraded old housing blocks, in cities such as Palma de Mallorca, where the poorest live cramped in tiny flats, unable to pay water or electricity, and ready to work for food (this is a fact confirmed to me by social workers from the municipality).

In most cases slum dwellers are part of traditionally discriminated groups, such as gypsies and immigrants. Most of Spanish towns’ slum clearance policies are strongly influenced by institutionalized social prejudices against such groups. In most cases this situation is addressed by dispersing the families in different government social housing blocks, trying to force them to “integrate” into the mainstream society. In spite of the lack of participation in the decision making processes that lead to resettlement, most slum residents prefer it than staying, tired of the social and physical problems that they face in slums. In many cases nothing is done due to the procedures that are implied in social housing policies, which do not fit the particularities of each poor neighborhood and family. In many cases public servants and even high-rank officials want to provide support to the urban poor, but they hardly manage to fit the bureaucratic procedures to what the urban poor would need to escape from poverty. The result is that Spain keeps developing at different speeds, and slums continue to be a living disgrace to its society as a whole.

Credits: Image of a Slum in Madrid from El Pais. Videos of Slums in Madrid, Sevilla and El Ejido from YouTube.