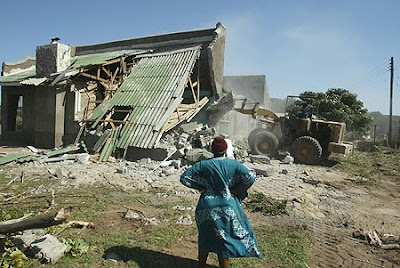 A lot can be said about Zimbabwean president Robert Mugabe, but the man doesn’t mince his words. In May 2005, Mugabe launched the unsubtly titled Operation Murambatsvina (Drive out Trash), an eviction and demolition campaign aimed at slum dwellers in Harare that ultimately left 200,000 homeless, according to UN estimates (other sources pegged the figure at 700,000). While Mugabe framed the drive as a measure to control a public nuisance (never mind the vast housing shortage and disintegrating public services), the move was seen as retribution for support among Harare residents for the opposition Movement for Democratic Change (MDC). Poor people in Harare are still rebuilding their homes today; informal construction of dwellings has seen a recent spurt, spurred by increased use of handmade bricks.

Forced evictions and slum clearance are not new phenomena and persist even in places that have enacted policies against arbitrary displacement; these daily occurrences are usually ignored. Mugabe’s drive probably received attention because it was particularly unabashed and occurred on a large scale. International organizations and leaders of rich countries were quick to condemn Mugabe. 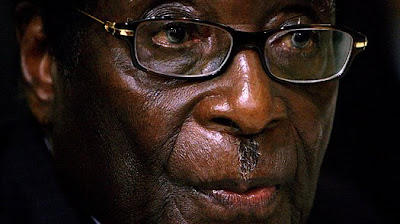 Although Mugabe’s actions undoubtedly deserved rebuke, John Vidal of the Guardian had a more cynical view of the international community’s willingness to wag a finger from on high.


“Whipped into a frenzy of hypocritical outrage, the EU, Britain and the US, as well as the World Bank - all of which have been responsible for millions of evictions in Africa and elsewhere as conditions of infrastructure projects - have rushed to condemn the ‘atrocities’,” he writes.

Vidal claims that Mugabe is an easy scapegoat for the West because in the past he has redistributed land acquired by whites in colonial times and because blaming tyrants like Mugabe takes attention away from historical and ongoing displacement supported by the West and the real causes fueling rapid urbanization and slums.

Initiatives packaged as infrastructure projects, urban redevelopment or city beautification in the developing world are usually also euphemistic slum clearance drives. As in the controversial redevelopment of the Dharavi township in central Mumbai, redevelopment and modernization projects become mechanisms for internationally acceptable – and encouraged – displacement of poor populations.

If, as Vidal points out,“rapidly developing countries are now doing the same as the rich world did during its own industrial and urban development” (namely, use forced evictions and land grabs to modernize cities and infrastructure and make way for areas for the better-off), is this an inevitable step in the development trajectory of cities? Or are current patterns different not only because of the scale of urban populations, but also because of the global systems within which they are embedded?

Mugabe’s eviction drive was ruthless, but obvious. Mass displacement as a silent externality of nice-sounding projects is harder to decry.


Credits: Photo of house demolition from IWPR. Photo of Robert Mugabe from TIME.