Ramallah Ulaanbaatar, the coldest capital in the world, houses one third of Mongolia’s three million people. Visually, it is a jumbled mix of pastel-colored Soviet-style buildings punctuated by a smattering of modern buildings, surrounded by a belt of ger districts with striking views of mountains in the background. The streets are cracked and pocked with potholes and just barely contain the maniacal drivers and heavy traffic. The streets, however, are in better shape than the sidewalks, where one needs to avoid cracks, gaping holes, missing bricks and manholes. The manhole covers are often only partly closed because they serve as the doorway to the underground sewers where the homeless of Ulaanbaatar live. The homeless sleep underground on the hot water pipes as a way to keep warm during the bitter winters. 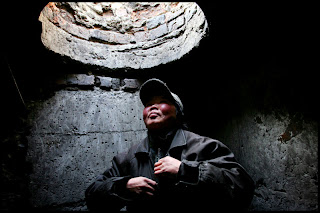 Sean Gallagher, December 2008, Out in the Cold: Homeless in Ulaanbaatar, Mongolia. – Mr. Gallagher describes his photo: “Battsetseg, 36, in Ulaanbaatar, Mongolia, is a former nurse who, 10 years ago, was forced onto the streets when she ran out of money during the country’s worst economic recession in the 1990s, following the country’s move to new democracy. She now lives underground in a sewer that has hot water pipes running through it, which she and her family use to keep warm and escape the cold.”

Approximately one third of the total population of Mongolia – one million people – live in Ulaanbaatar. The country has experienced rapid urbanization since the collapse of communism in the early 1990s, as many rural residents migrated to the city in search of opportunities, especially in recent years. However, since the end of communism, very little low-income housing has been built in the city and the poverty rate – currently around 36% - has not decreased. Mongolia’s GDP is reported at $1,000 and the poverty line is classified as $17 per day. The recent economic crisis has hit the country very hard, virtually stopping in mid-stride any building or housing construction; the World Bank reported that real income collapsed by about 60% between April of 2008 and April of 2009. These issues are compounded by high unemployment and alcoholism, which many homeless families resort to as a way to keep warm during the bitterly cold winters.

In Ulaanbaatar, it is estimated that there are somewhere between 1,000 to 4,000 homeless children, and approximately 10,000 homeless people. Many children are abandoned by families that are plagued by alcoholism and some are enslaved by pimps who encourage them to beg and take the proceeds. There are a few non-profit organizations that provide social services for the homeless children, but as one walks around Ulaanbaatar it is impossible to miss them – the small children covered in dirt from the underground pipes, often begging.

Being homeless in Ulaanbaatar is only marginally better than residing in the ger districts, which is now home to 60% to 65% of the city’s population. Rapid urbanization over the last 20 years has resulted in ongoing urban sprawl, with ger districts developing unplanned and surrounding the city. Gers are traditional Mongolian homes and have been in Ulaanbaatar since the 17th century, easily portable rounded wooden structures covered by a heavy felt blanket and heated by a stove in the center of the structure. Many of the ger district residents live below the poverty line and are unskilled. They are Ulaanbaatar’s equivalent to shantytowns or slums – unpaved streets, no running water except at specific collection points, pit-latrine outhouses (in which you have to go outside in the freezing temperatures) and high levels of pollution from the coal-burning stoves used for heating and cooking. In addition to the high levels of pollution (estimated as seven times higher than in the city center), fuel costs often consume 40% of the households’ income. (The ger districts are described by Dave Lawrence in the East Asia World Bank blog.)

While it has attracted some attention (Dave Lawrence describes many of the international and national approaches to the issues of housing and pollution), from international donors to Mongolian microfinance institutions to local non-profit organizations, the situation is still deteriorating and the numbers of homeless and those living in the ger districts are still increasing. As I drove back through Ulaanbaatar after spending a day in the countryside, the visible levels of air pollution and sprawling ger districts were blatant and striking, in sharp contrast to the peaceful expanses of the snowy November country.