Policies for Transparency in Design Performance 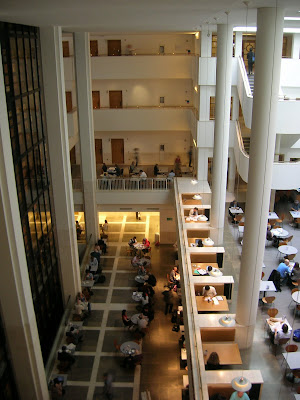 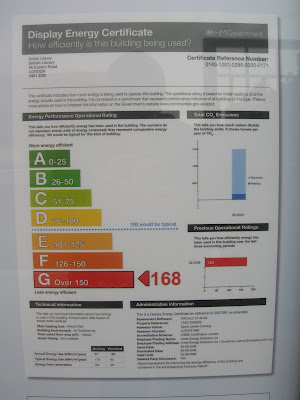 In keeping with the evolutionary trend in democratic societies of increasing public access to information, there is a requirement in the UK to display the energy consumption data of large public buildings. More specifically, a regulation to visibly post a Display Energy Certificate (DEC) on all public institutions with an occupied floor area exceeding 1,000 square metres was enacted on October 1, 2008. This attempt to clearly communicate carbon emissions data to the general public is a way of engaging citizens to hold designers and engineers accountable for the environmental impact of their built work.

The data on the DEC measures the energy performance of buildings both on absolute levels of carbon emissions as well as in comparative relation to previous years. Because this policy has been implemented for less than two years, it is too early to judge its effectiveness in curbing the carbon output of existing buildings. For instance, a full set of data for two consecutive years at either the British Library or University College Hospital is not yet available, therefore making any change in energy behaviour invisible. The initial (and shockingly bad) emissions ratings on many buildings may shame the directors of these institutions to cut back on energy usage, but it probably has more potential in improving future buildings than in mitigating the detrimental effects of existing ones. If a new building is planned knowing that the entrance space will prominently display an Energy Certificate, there will be more pressures for the design to deliver an excellent rating. While the aesthetics, materials, and physical experience of large public buildings have always been visible and open to critique by their very nature, this policy intervention attempts to add energy efficiency to this list, rendering visible what once remained obscured from view.

Is the government using too heavy or too light of a hand in this legislation? While the DEC is accompanied by an Advisory Report, which details specific ways to reduce the energy consumption of the building under investigation, there is no requirement or incentive to make changes, or penalties for failing to do so. The only incentive to lower emissions would be that the DEC would reflect such positive change over time, and the public perception of the institution could potentially improve as a result. Like the Citizen's Statement of Offence, as reported in a previous post, the DEC may at least begin a wider dialogue, thereby setting in motion the mechanisms of change and progress.

On October 27, 2009, this concept shifted scale to the individual household with Google's PowerMeter application, giving residents continuous access to energy consumption data. The speed and ease with which knowledge is transferred using current technology has the potential to allow individuals to re-prioritise the information they consume and act upon. Will this increase the value of the professional services offered by architects and engineers experienced in energy-conscious design? Will it convince clients and those funding such projects to place energy efficiency as a higher-priority design item?

Switching from the idea of reducing carbon emissions to the complementary concept of maintaining the planet's capacity for carbon absorption, we have good news from the boreal forests of Canada - another policy intervention taking action against climate change.


Credits: Images of The British Library and its DEC by Andrew Wade.