Patent from 1933 describing a variation on the typical levee construction technique.

Last week, a federal judge ruled that the U.S. Army Corps of Engineers was liable for damages caused by levee failures in the Lower Ninth Ward during Hurricane Katrina. Although a provision in the Flood Control Act of 1928 (which initiated large scale public works along the Mississippi River) absolves the U.S. government of liability from the failure of flood control works, the levees in question are officially parts of a navigation channel and therefore not protected under this provision. The ruling in particular blames not the construction or design of the levee itself, but rather the lack of proper maintenance and "insouciant" attitude towards long-known and reparable flaws.

Levee breaches and resultant floods mapped in New Orleans over the course of 90 minutes.

But levee failure is inherent to levee construction--levees constantly, gradually fail: their bulk is subject to decomposition and settling; their tops are eroded and their foundations are undermined and underseeped; their bases subside from lack of sediment, the contained rivers rise against them from too much of it. It would seem that to build a levee is to plant the seeds for its own destruction.
And yet levees and flood-protection works are inescapable. Many cities, including New Orleans, Amsterdam, and Venice would not exist without them. And as sea-levels rise, cities with infrastructure and populations concentrated at the water's edge will inevitably turn to walls and barriers to keep out the water. Although the world most often turns to experts from the Netherlands when planning for this wet future, Japan has been quietly building a robust flood-protection system that might provide equally sophisticated lessons. Most interestingly, Japanese engineers have been experimenting with a fail-proof, low-maintenance levee for the protection of urban areas in flood-prone cities like Tokyo and Osaka.

Cross section through a super-levee in Osaka.

These so-called "super-levees" improve on the typical levee by widening its footprint and reducing the backslope to a low grade. The result is a flood-protection zone instead of a mere barrier. These super-levees minimize the risk of breach and underseepage that threaten thinner levees. Water that does overtop a super-levee is slowed as it flows down the long backslope; water overtopping a normal levee cascades down the back, quickly eroding and compromising the integrity of the structure. With their broad bases, the super levees are also less likely to fail during earthquakes. The super-levee offers advantages beside the structural and fluvial. The stabilized and strengthened sides can be developed, extending the urban fabric right up to the top of the levee and allowing easier visual and physical access to the water. In Japan, these developments are tall, raised on piloti, and interwoven with parks and open spaces that are scarce through much of the city.

The super-levees are not free from problems. For one, their extreme width means that a swath of land one block wide along the river or bay front needs to be free and available. 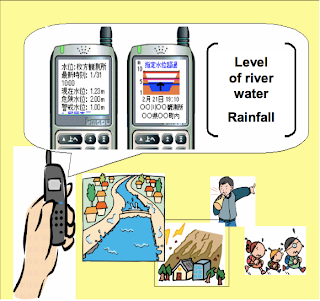 Since most of this land is occupied, the majority of new super levees have been built on vacant or post-industrial land (where it serves as a convenient contamination cap). The super bulk of a super-levee also demands problematically large amounts of fill material. Some of the fill can be offset by including parking and service structures in the body of the levee. And, finally, although bomb-proof, the levees are not a complete solution. In Japan, they exist as part of a larger strategy of public works that include flood gates, retarding basins, satellite and radar monitoring, and instant communication alerts (as shown in this cute diagram).

The lesson from Japan is to consider flood-protection not as the isolated endeavor of a single agency, but as part of a larger body of work that is intertwined with urban redevelopment, open-space planning, land rehabilitation, and habitat generation. Most importantly, the Japanese model proves that protecting our cities from floods does not mean shutting them off from the water. With many of levees around the country protecting our crops rather than our lives, sophisticated levee solutions will also have a rural application. Although no one in the U.S. has yet embraced Japan's example, the inadequacy of our current flood protection models is being increasingly exposed.

Super-levee on the Edogawa in Tokyo.