The 21st Century will be an urban century. This prophetic assertion underlines the moment, sometime at the end of 2009, when the balance of the global human population shifted from rural locations to urban centers. Far from the shrinking cities of the developed world, the stage for this transformative act has been the developing world, where an agglomeration of circumstances — the great migration to Chinese cities, the growing importance of African metropolises, the thriving economies of Latin American nations and India — underscore the veracity of this prediction. The 21st Century will be the century of cities driving the modernization of emerging nations. 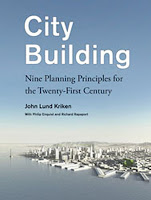 City Building: Nine Planning Principles for the Twenty-First Century (Princeton Architectural Press, 2010) seizes this moment of urban transformation to propose a principle-driven prescription for sustainable urbanism. This highly readable, accessible and elegantly illustrated volume offers a collection of urban design best practices, arguing for both the universality and value of sustainable urbanism. With the goal of “creating cities that become mega-tools enabling millions of people to live in harmony with their environment,” the publication aims to capture the zeitgeist of millennial urbanity.

City Building is also a record of the impressive portfolio of multi-national design firm Skidmore, Owings & Merrill (SOM). The firm’s projects, in their diverse scales and executions, mark an illustrious professional trajectory characterized by global recognition and reach. From Bahrain’s National Plan to London’s Canary Wharf, from DC’s Pennsylvania Avenue to Chicago’s Millennium Plaza, the emphasis on quality, diversity and scalability that has defined SOM’s global footprint over the past 40 years leaves a profound impression in the world and the reader’s imagination.

The book structures the argument for the principle-driven sustainable city around nine axioms: sustainability, accessibility, diversity, open space, compatibility, incentives, adaptability, density and identity. Each principle is exemplified through a selection of project types, ranging from mega-projects to design acupuncture, and illustrated with conceptual graphics and project renderings. SOM’s emblematic projects serve as case studies for the application of these principles. A collection of images, plates, renderings, vignettes and free-hand drawings offers some of the most compelling pages in the book, as text and figure combine to perform analysis and exposition. City Building becomes a handbook for representation as the reader bears witness to SOM’s signature representational clarity as a distinctive graphic language.

City Building is a useful contribution to best-practices literature on urban design and planning. Yet its particular approach invites critical interrogations not only for the vision of a twenty-first century urbanism but also for the genre it exemplifies: the professional monograph.

The book offers a cursory discussion regarding the potential of applying “best-practice” techniques in international contexts. The complex process of urbanization in emerging nations – through the intersections of policies, design, planning, and infrastructure - depends on a set of social, economic and political relations with deep place-based particularities. Instead, the book’s argument for a principle-driven sustainable urbanism bases its normative position on standard methods and technocratic dialogues produced in the studios of a multi-national firm aimed at packaging a product. City Building does deal with specificity, but in broad principles addressing identity through built form and natural environment. Thus, a discussion on the degree to which professional vernaculars may use, misuse or re-apply best practice based on local expediencies remains unexplored.

City Building also provokes reflection on the production of urban design knowledge and its branding. What is the legitimacy of the manual for practice when it also functions as a promotional monograph? In essence, City Building follows the same argumentative line (and similar emphasis on sustainability) as leading monographs in the discipline of urban design, which deploy professional techniques as prescriptive principle-oriented solutions. Like Sustainable Urbanism: Urban Design with Nature, The Landscape Urbanism Reader and the Smart Growth Manual, this monograph claims the expertise of good city form not only in the name of the twenty-first century city but also in the name of the expert, its firm and its particular brand of place-making.

Such branding exercises cause the genre of the professional monograph – as the place-making best practice – to reach a point of exhaustion. No doubt international design firms play a powerful role as consulting experts around the world, but in the metropolises of emerging nations, experts may encounter “urbanisms” that conflict with the normative approaches of best practices. For example, how can the urban design “best practice” deal with the realities of informal settlements? What are the implications of governance, participatory politics and land tenure contestations within the “best practice” framework of urban morphology?

Certainly, the 21st century will be about the value of sustainable urbanism. Nevertheless, this impending reality may also suggest a new ethic of professional design practice. This ethic may not be about the application of principles or the pursuit of megaprojects but rather the recognition of everyday actions within office culture or street life as sources of information and inspiration. Such ethos may involve sustainable notions of equity and open source technologies or practices. Arguably, we are entering a time when sustainability is defined by provisional or flexible arrangements between clients and employees, between products and producers, between ideas of individual and collective ownership. How can the “best practice” be reshaped to address what lies beyond the image of the master plan and the normative authority of the expert to address contingent realities on the ground?

City Building articulates an argument for a principle-driven newer urbanism deftly and clearly. Yet with its record of exemplary projects, its lessons in graphic representation and its principles for sustainable urbanism, it also provokes a deeper observation: beyond the prescription of the best practice lies the possibility to rethink the professional values, goals and methods that will shape the twenty-first century city.