Fortress Cities as the World’s Powerful Come to Town 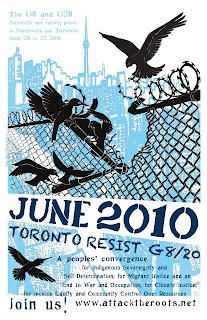 As large-scale protests have become the norm during summits where the world’s most powerful gather, such as the World Trade Organisation (WTO), G8/G20, International Monetary Fund (IMF) and so forth, it is becoming commonplace to see the cities where such events are hosted retrofitted into fortified bastions, in theory to protect delegates and ensure meetings are ‘unaffected’ by dissenters left outside. This went to serious extremes during the recent G20 meeting in what many dubbed ‘Fortress Toronto’, where over $1 billion was spent on a security makeover for the city, marking the most expensive three days in Canada’s history.


A six plus kilometre long, three metre high ‘security’ fence was built around most of downtown Toronto and large swaths of the city’s core looked like a police state, with an estimated deployment of over 19,000 security personnel, nearly five times the number at the G20 in Pittsburgh last year, according to Democracy Now. And ironically enough, SNC-Lavalin – Canada’s largest engineering company and one of the world’s biggest engineering, construction and infrastructure management firms, known to supply bullets to the US military and as a significant private contractor in Afghanistan – was awarded the contract for the conceptualisation and construction of the security infrastructure throughout downtown Toronto. 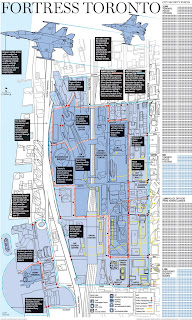 The parallels between citadel-like / hyper-securitised city and the exclusive, elite participation inside the barriers during such summits is lost on no one. While the countries in the G20 make up 85% of global gross domestic product (GDP), generate 85% of world’s climate change-related emissions and hold two-thirds of the world’s population, the elite of these places call the shots through a completely non-transparent, non-participatory process, while the other 170 nations of the world have no place at the table. As long as this unjust, inequitable and unsustainable system continues as is, dissent will rage on and the elite will no doubt continue to fortify the city when the powerful come to town.