Just before elections in Spring 2007, Jaume Matas, the the right-wing Popular Party's ex-president of the Balearic Islands Government, announced that the Valencian stararchitect Santiago Calatrava would build a new Opera Palace in Palma worth one hundred million euros. With claims that the ‘emblematic’ Opera Palace would ‘de-seasonalise’ tourism on the island, Calatrava was paid 1.2 million euros for the pre-project presentation design – money paid out of taxpayers’ pockets, where the hidden agenda of gaining votes was lost on few.

While some criticism was made at the time, it exploded a few weeks ago when it emerged that Calatrava designed the project in 1989 for Zurich, to be built on Lake Lucerne, as a submission for a competition to commemorate the 700th anniversary of the Swiss Confederation. Judging by the models of the two projects – the Swiss and the Mallorcan – the only difference is in functionality and an extra: in Zurich, the building was imagined to float on the lake and its use would be versatile, while in Palma the structure was envisaged to emerge from the ocean, would house an opera and had an additional commercial and recreational zone. 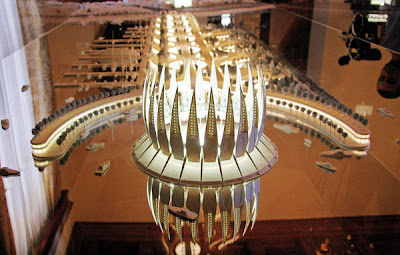 While I have no problem with reusing existing architectural concepts and designs, which is the reality of many projects around the world, my concern is with the (lack of) ethics in this situation. In June 2007, Calatrava stated that the Opera House ‘is a gift for citizens’ and said that the ‘only driving force’ that led him to design the structure was his ‘profound affection and great respect’ for Palma. Yet in an issue dedicated to Calatrava in 1992 reviewing his main designs to date, the prestigious international architecture magazine El Croquis noted of Zurich’s concrete pavilion, in what appears to be Calatrava’s words: ‘our intention was to establish a dialogue between a fine harmonic form made of modern materials and the most beautiful mountain and lake landscapes in the centre of Switzerland’. Landscapes very different to the hot and humid Mediterranean of Mallorca. Apart from not recognising the real genesis of the project, the Valencian architect made off with 1.2 million euros for a three-minute video and a model of the proposed iconic Opera House (the latter with its own 80,000 euro price tag). No plans were presented – and none actually exist.

Yet both sides are at fault here. Although it was unclear who determined the price tag and deliverables, it was both paid and accepted. Matas and those governing with him were clearly lured in by the appeal of a stararchitect and an iconic structure in an attempt to bring some flash and awe to bolster their party’s position in the upcoming elections. As Matas is currently charged with twelve (yes, 12) offenses related to corruption – six of which are embezzlement of public funds – the judge trying his case is now also looking for possible irregularities in the payment to Calatrava. But this is all taken in stride here, where scandals around urban development are nothing new, as I will discuss in my next post.

Credits: Photo of the Opera House model from DiariodeMallorca.es.