Several impressions strike you when landing in Beirut; the majestic topography framing the city beyond the waters of the Eastern Mediterranean; the density of built fabric signaling a bustling metropolis; and the audacity of informal settlements encroaching into the coastline and into Hariri International Airport.

These initial images are negotiated with memories that encompass the range of an urban imagination profiling the city: Beirut the Paris of the Middle East versus Beirut the war-torn city. On my way to the hostel my taxi drove through the expressway connecting Beirut’s southern suburbs to the rebuilt central business district. This trajectory offered me an urban landscape whereupon my utilitarian dichotomy was deployed; an arrangement which informed and shaped my foreign gaze.

I had come to Lebanon to attend a conference on the “Utopia of Tradition” held at the American University of Beirut. My stay was short – only 6 days - and my movements through the city consisted on travelling from the eastern quarters of Gemmayze to Hamra on the Western end of the city. Given the brief nature of my sojourn, this post is a brief reflection on a city that leaves you with deep impressions and the understandings we use to make sense of it. At stake is an observation on the process of urban development driving reconstruction in a post-war urban setting and a commentary on the need to capture the discreetness of everyday life by residents who negotiate the realities of reconstruction.

The green line separating East and West Beirut and the location of Beirut's CBD.

At the epicenter of Beirut’s national reconstruction narrative lays the memory of the Green Line. This once emblematic boundary between the western Muslim quarters and the eastern Christian quarters parallels the North-South trajectory of the expressway from the airport to Beirut’s central Business district (CBD). Following the end of the Lebanese Civil War (1975-1990) the CBD has undergone an intensive physical transformation under the auspice of Solidere a public-private conglomerate heralding a paradigmatic model of post-war urban reconstruction.

Part of Rafik Hariri’s monumental economic and political legacy in post-civil war Lebanon, Solidere continues to embody his vision for a peaceful and prosperous Beirut open to foreign investors, following his assassination in 2005. Solidere’s complexities and contradictions can be analyzed in the multiple layers of new and old built fabrics that compose its evolving master plan. The reconstruction of the CBD was originally carried by Tabula Rasa erasing the memory of war. This meant the destruction of historic structures and the imposition of imminent domain within a neoliberal urban regime giving precedence to private enterprise and de-regulation. Following a number of mobilizations, archeological ruins dating back to antiquity and historic structures have been refurbished into newly designed public spaces and well-preserved places of worship, office space, housing and new retail.

In a metropolis, where institutional planning is set aside by the expediency of speculative development set in motion by episodes of ware and peace, a city within a city was built on the remnants of what used to be no-man’s war zone. This effort includes contributions by world-renowned star-architects. In less than a square-mile iconic structures by Steven Holl, Arquitectonica, Jean Nouvel, Rafael Moneo and Christian de Portzamparc, manicure a reconstituted past into live-work-play environments with the usual revitalization cocktail of livability, walk-ability and best practices. The vision of a harmonious urban identity by physical erasure and the strategic addition of urban fabric stands as one of the hallmarks of Solidere’s mega operation. 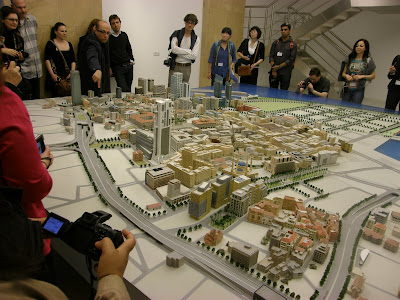 A model of Solidere's completed Master-plan

Less than 5 miles from the CBD, in the southern suburbs close to the airport, a very different city within a city takes shape revealing another dimension to post-war reconstruction in Beirut. Emerging from the 2006 war with Israel, Hezbollah deploys the Wa’d; the promise to rebuild the quarter of al-Dahiya – Hezbollah’s capital – in a manner “more beautiful than it was”. In the brutal bombardment’s aftermath the reconstruction plan set in place by the Lebanese government focused on compensating victims and enabling funding channels for foreign countries to “adopt” villages in southern Lebanon. The Hezbollah leadership, however, used its network of non-government organizations, local service providers, volunteer groups and cadres of supporters to circumvent the state and envision the re-development, design and master planning of Southern Beirut (1).

The bombing of Beirut's southern suburbs before and the Wa'd. "The Promise".

By adhering to a doctrine that de-emphasizes the role of the central state and empowers the private sector, in a rogue public-private partnership, Hezbollah has produced its own urban growth machine. With equally ambitious discourses proposing sustainable design solutions, the Wa’d engages the process of creative destruction by adopting urban reconstruction not only as a means to claim territory and produce memory but also as means to proclaim a political-theocratic ideological agenda. The fundamentalisms of capitalism and religion coincide between two frameworks of post-war reconstruction in Beirut.

These reconstructions allow us to re-consider the material, social and political dimensions that provide a finer texture and arguably challenge the all-pervasive conceptual blanket that defines Neoliberal urban regimes. By exposing how disaster capitalism take different forms, mixes with local histories, acquires strategic and tactical exigencies and is carried out by a wide variety of contradictory actors, the outsider’s gaze is forced to re-consider essentialist dichotomies which give sense to the city.

Yet having said this, the most important voices remain absent in this account. The voices and perspective of local residents, who long after my departure, negotiate two reconstructions in an experience of everyday life. How do we capture the perspective of the local residents outside the foreign gaze? How do we value and make sense of the exemplars that represent reconstruction, illustrations of global economic processes and geopolitical narratives, and pay tribute to the discreet stories of daily life?

(1) Al-Harithy, H Lessons in Postwar Reconstruction: Case Studies from Lebanon in the Aftermath of the 2006 War, Routledge New york 2010