What would New York City look like without any homelessness? Rosanne Haggerty has been imagining this, and creating innovative approaches towards this goal, since the early 1990s. Through Common Ground, an organization she started in the 1990s, she has been heralded for her successes in housing the chronically homeless, those who are most vulnerable and difficult to house. One of her newest initiatives, 100,000 Homes, is creating a unified approach for housing some of the most vulnerable homeless around the country, with the ambitious goal of housing 100,000 chronically homeless by 2013.

One of the most interesting aspects is the comprehensive approach to the solution, which includes community leaders, residents, government and non-profit organizations. Within each community, the solution relies on a local team of community members to identify and quantify the demand for housing, government entities and non-profit organizations to supply housing and supportive services and to organize these services, the initiative of the recipient to move into housing (often along with strong encouragement and support) and a range of services to keep people in their homes. In his New York Times article, David Bornstein discusses how the 100,000 homes program has gained traction partly because of its argument that chronically homeless should be considered a public health emergency – a population with significantly shorter life expectancies and victim to numerous illnesses, many of which cannot be treated when living on the streets. This pulls in additional resources and entities and further widens the approach to solve chronic homelessness. 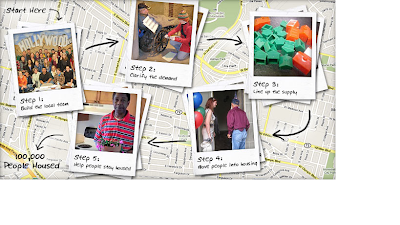 This will not end homelessness in New York, or any other city. The chronically homeless are a minority of the homeless population around the country, and there will always be emergencies that result in people losing their housing or ending up on the streets. But the hardest people to house, and to keep housed, are this population, who uses a disproportionately large percentage of government resources over many years. Housing 100,000 of the most challenging people in 3 years would be a huge accomplishment, and can only be done by galvanizing communities, governments and innovative leaders. As of tonight, they have housed more than 7,043 people, with high retention rates of 80 to 90 percent. Track their progress on their website – 100khomes.org – or join their team, in one of the 64 communities that has joined their cause across the country.

Credits: Image of 100,000 Homes model to end homelessness from 100khomes.org.