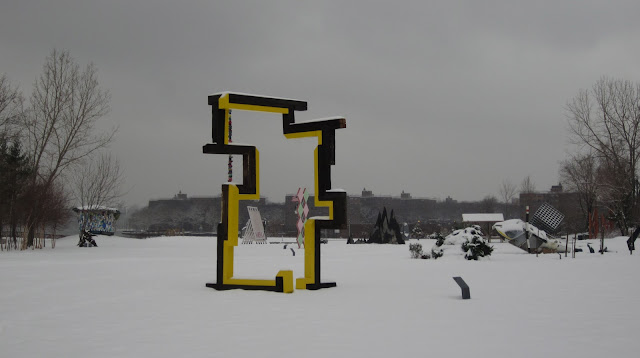 Located in Queens overlooking the East River, with a phenomenal view of Manhattan, it's difficult to believe that Socrates Sculpture Park is located on what used to be an abandoned, illegal landfill site. The space existed as a neglected riverside dump until the mid-1980s when artist Mark di Suvero brought together artists and many local residents of the area through his vision of ‘artful living’: to create a dynamic outdoor art and community space accessible to all people. Using bulldozers and shovels, they cleaned the land and turned it into a large-scale public sculpture park, now run in partnership with the New York Parks and Recreation department and a non-profit organisation known as Socrates Sculpture Park.

Bookmarked by two of the largest public housing sites in the United States – on the north by Astoria and Queensbridge on the south – engaging particularly underprivileged and marginalised communities surrounding the park and creating a space accessible to all residents of the neighbourhood has been a priority. From May to September the park is bustling with activity, including markets selling locally made crafts, solstice festivals, an outdoor international film festival, puppetry and theatre workshops and a multitude of educational workshops for local school students, adults and community groups. All activities are free. Socrates provides a unique space in the New York Metropolitan area dedicated to providing artists with opportunities to create and exhibit large-scale works, focusing on interaction between art, artists and the public. The park hosts an emerging artist fellowship and a theme-based outdoor residency programme for more established artists, with a total of over 170 who have exhibited in the park since its founding.

Yet similar to waterfront areas across New York City, the area is, unsurprisingly, experiencing serious development pressures which are manifested spatially as expensive skyrise housing begins to sprout up around the park. Socrates faces an important challenge in keeping the area accessible, particularly to marginalised residents, as a place for learning, community and personal growth.