Forbes is Making Me Miserable 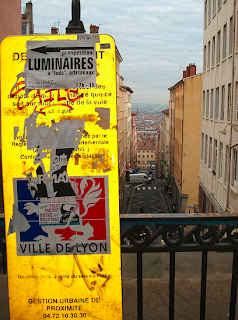 As a general rule, I am all in favor of people talking about cities. It is both my hobby and my profession, and I am on record as believing that more people thinking about and talking about how and where we live and work and interact is part and parcel to making those relationships more equitable and more sustainable. That, and it means more people reading Polis.

But there are times where I want to pull my eyes out at the things I read.

It starts with Geoffrey West, the physicist whose forays into urbanism he has compared to Kepler's discoveries in physics. As my fellow Polisian Anna Fogel points out, there is some redeeming value to his work, which attempts to reduce all urban activity anywhere to points on a linear regression. Efficiency is a part of the urban conundrum, and some basic "truths" about the correlation between growth rates and infrastructure could help with service provision in an urbanizing world. The New York Times helps West's case by giving the sole rebuttal to Joel Kotkin, the world's leading promoter of suburban life. Yet the argument is a bit absurd, because West and his partners, like Kotkin, never really bother to define what a city is — they just take data attached to a name, never thinking about the region or the metropolis. They talk of Riverside, California as if it is a stand-alone place, rather than a place enmeshed in a larger metropolitan region. If they want to play city as organism, this is their organism.

The region as the true organism is a fact that Jane Jacobs pointed out in Economy of Cities and Cities and the Wealth of Nations, two great books that I will add to my list of great Jacobs' ideas that seem to get forgotten in the fetishization of the "sidewalk ballet." Jacobs is building on ideas about innovation and urban interaction pioneered by Simmel and the Chicago School of Urban Sociology a century ago, a fact pointed out by a nice New York Times reader in Dallas, and which are the underpinning for decades worth of economic geography. Maybe we feel better now that a physicist used math to tell us something we have known for a century.

That said, I will take West and an army of data-crunching physicist-urbanists over the hyperbolic dystopian garbage that Forbes is slinging about "America's 20 Most Miserable Cities." It is based on a vague "methodology" that somehow combines real estate prices, unemployment rates, losing sports teams, tax rates, commute times, crime and bad weather into a frothy cocktail which spits out a list of "miserable places." The editors are even kind enough to give us a handy slide show so that you can see a picture of each miserable place, usually a foreclosed house or a protest sign. 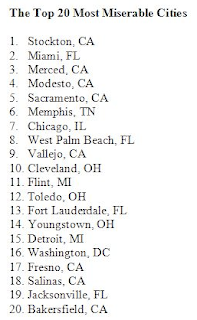 This "index" contributes nothing to our knowledge of places or our hopes of making anything better, and is essentially nothing but the TMZ of urban journalism, designed to produce blog posts and generate traffic to their website. But what is most galling is the fact that a ruling class mouthpiece like Forbes saw not a shred of irony in the overwhelming relationship between the places on its list and the foreclosure crisis and subsequent economic downtown, and, more critically, the fact that the "happy places" are doing quite fine after a Wall Street bailout and resurgent corporate profits amidst stagnant wages and property values for the middle and working class. There are "miserable places" everywhere in the United States now thanks to the economic logic pushed by Steve Forbes and his comrades over the years in every Metropolitan Statistical Area (what they mean by city) — some are just lucky enough to get their picture in the magazine.


Credits: Photo of Lyon by Alex Schafran. Image of the cover of CATWON cribbed from the Amazon.