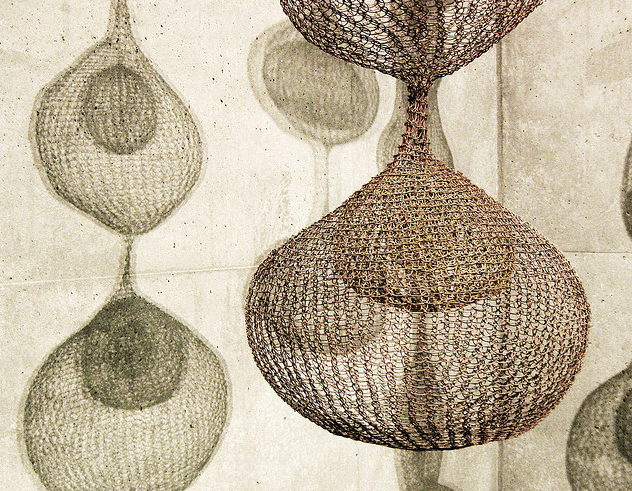 Ruth Asawa has contributed to the quality of life in cities for many years, through brilliant artwork and a strong commitment to arts education. She continues to help create a better society than the one she faced in her youth.

Ruth's parents emigrated from Japan to Norwalk, California, where she was born in 1926. They worked as truck farmers to support seven children, surviving the Great Depression only to be transferred to internment camps during World War II. Ruth studied drawing and painting with professional artists who shared her family's plight. Upon release, she moved to Milwaukee to pursue a degree in art education. She was denied practice-teaching positions because of her ethnicity, making it impossible to graduate. This prompted a fortuitous move to North Carolina, where she studied art at Black Mountain College.

Intensive classes with Josef Albers, Merce Cunningham, and Buckminster Fuller helped Ruth develop the experience and confidence she would draw upon as a working artist. She learned techniques of basket crochet in Mexico, which she drew upon in creating the wire sculptures pictured above. In 1949 she married Albert Lanier, a fellow student at Black Mountain. They moved to San Francisco, where they raised six children. Albert worked as an architect while Ruth stayed with the children and continued her artwork. This period is touchingly described in her online biography:


She and Albert struggle to make ends meet financially. They begin a life-long friendship with the photographer Imogen Cunningham. They try their hand at designing for industry, but are offended at the business practices. Ruth works at home in her studio, often at night and in the early morning while her children sleep.

During these years, Ruth became an active proponent of arts education. She helped found the Alvarado Arts Workshop (now the San Francisco Arts Education Project), providing opportunities for kids to practice creative problem solving through artwork and gardening. She also helped establish a city-wide art and science festival, as well as a public high school for the arts. The school now bears her name.

Ruth never stopped creating drawings, paintings, and sculptures. They've been very well received, bringing scores of exhibitions around the world. Still, her focus is refreshingly local. Ruth's public artwork — from the fountains at Ghirardelli Square, Japantown, Union Square, and Bayside Plaza to the Garden of Remembrance at SFSU — has helped create some of the most memorable places in San Francisco.

My introduction to Ruth Asawa's work is one I'll never forget. It was in the de Young Museum, where a number of her sculptures are featured at the base of the tower. Most, if not all, are mobiles. The intricate patterns cast shadows that turn from sharp to blurred. Their presence is organic and otherworldly. I was so impressed, and still unaware of Ruth's involvement in the community. It's strange that she isn't listed among the luminaries on the Black Mountain website, but it really doesn't matter. Her work speaks for itself.

This is part of a collection of featured artists who relate in different ways to cities.