Perspectives on Protest and Planning 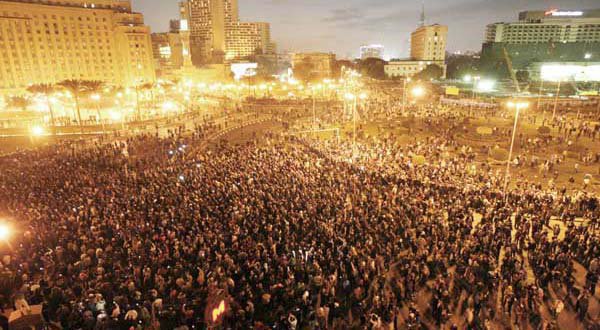 In a recent post, two guest authors writing about the Egyptian protests and the role of cities in mass protests noted that "[t]he past few days have not been determined solely by the Army and the Police, Hosni Mubarak or the Protests, Media or Rumors, Pamphlets or Twitter, Facebook or SMS, but instead by the meeting of feet with boulevards, the intersection of Internet access and privilege and the fusion of history with rubber-coated steel bullets." Reflecting on the monumental meeting of feet with boulevards in Cairo's Tahrir Square a few weeks later, reportage on Fast Company and The New Yorker offer their respective viewpoints, in unwitting counter-dialog with each other. The article in Fast Company contends:

Urban planners can help promote a healthier democracy by designing spaces that allow for equal public access, including for journalists. Less pressing is the need to make them beautiful.

"As the recent events in Cairo suggest, a protest space doesn't have to be nice or well-designed," [architect] Hatuka says. "A large-scale protest like this has shown that people will just hijack the streets and the roads."


I saw one man carrying a black garbage bag with a sign across his chest: “Yesterday I was a demonstrator. Today I build Egypt.” I met a couple of young students from the American University in Cairo, carrying brooms. One said that she had been discussing this new community spirit with her father. “We thought people didn’t care,” she said, “and just threw their garbage on the street, but now we see that they just thought it was hopeless—why bother when it’s so dirty. Why not be corrupt when everything is corrupted. But now things have changed, and it’s a different mood overtaking. Even I can’t stop smiling myself.”

Fast Company and Hatuka seem to have missed the point in their interpretation of the monumental events that took place in Tahrir Square. Far from showing that urban spaces don't need to be beautiful or "nice" for displays of democracy to flourish, the state of Tahrir Square in its erstwhile squalor and disrepair is really a result of the populace's eroding faith in the system. It is the product of the lack of democracy in the first place -- and thus a growing sense of apathy and hopelessness among the people.

If what designers take away from the story of Tahrir Square is that "a protest space doesn't need to be nice or well-designed", then they would be no better than the misguided powers-that-be who couldn't care less about the well being of the populace. Perhaps a truer observation is this: the way in which a community interacts with its immediate environs is a barometer of its social, economic, and political health. Public spaces in a persistent state of filth and neglect point to a systemic breakdown in public services (and with that potentially incompetence, corruption, and/or a lack of resources), a populace's ambivalence -- or worst, its chronic state of unhappiness. ("Why not be corrupt when everything is corrupted?").