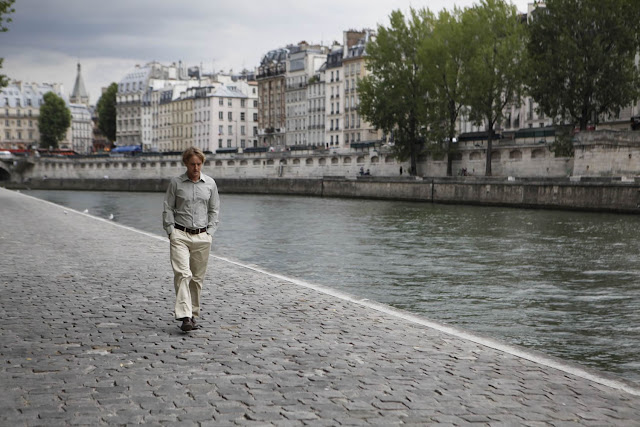 After innumerable bombs and a fun romp with the Spaniards, it seems that Woody Allen decided to write a movie especially for me. “Midnight in Paris” is a love song to an imagined Paris and a wickedly funny commentary on that absurd trope of which I am now somehow a part — American, writer, living in Paris, trying to make something of himself.

Allen shows little of the “real” Paris populated by those who are not the ghosts of Hemingway, Gertrude Stein, or Adrien Brody's inspired Dali, but then that is not the point of the movie. Nevertheless, it did inspire my own attempt at urban literary nostalgia.

I’ve been reading Brassaï’s account of Henry Miller’s years in Paris, and though I honestly can’t stand Miller’s writing, his life is fascinating. Brassaï claims that a large reason why Miller came to Paris is that he felt he could live a more dignified life in the midst of poverty than in the American city, where being poor was viewed as a “moral failure,” a commentary on the differing experiences of poverty and class between American and French global cities with which I am grappling today. Miller was also an inveterate wanderer and urban scribe, a man fascinated with the dirt and grime of the city, an explorer a la Benjamin but without the intellectual skills or the deep politics.

Miller spent two years, from 1932 to 1934, living just up the road from me in the suburb of Clichy, haunting the streets of my neighborhood. Brassaï is kind enough to publish a map of some of Miller’s favorite spots (adapted above), and what follows is an update, almost 80 years later, on what has become of Miller’s Paris. Even more amazing than what has changed is what has not. Brassaï’s words (with some Miller quotes) are in italics; mine are what follows.

“At the end of March 1932, Henry and Fred moved into a small, modest-looking apartment at 4 Avenue Anatole-France. The apartment consisted of two rooms, a kitchen, and a bathroom, and was located a half hour’s walk from Porte de Clichy, last stop on the Metro.”

Henry’s block of Avenue Anatole-France is likely a bit spiffier than in was when he moved there, when Clichy was “one of the seediest” suburbs of Paris, in Brassaï’s words. Tree-lined and quiet, with the classic 6-7 story density that is the hallmark of the city, all but the most hardcore of architecture students would have a hard time pinpointing the detail that demonstrably puts you in the banlieue. A few streets over on Bd. Jean Jaures you get a better sense of inner banlieue street life, packed with traffic, motor scooters, and Middle-Eastern men sitting outside of cafes and bars. Clichy seems to be a bit of an in-between place, smack dab between the bourgeois burbs of Neuilly and Levallois and the “neuf-deux,” and the more rough-and-tumble Saint-Denis, Saint-Ouen, Aubervilliers and the “neuf-trois” of French hip-hop fame. Wedged as it is between the river and the city, with great subway access (unlike in Miller’s day), I’d bet my Chuck Taylors that it is gentrifying rapidly and that I may end up there soon.

“Henry also explored the intersection between Place de Clichy and Porte de Clichy called ‘La Fourche.’ La Fourche! A prophetic name if ever there was one! Destiny itself must have placed it in the path of the author of the Tropics, and it must have been for his benefit alone that Avenue Clichy branched off from Avenue Saint-Ouen, like two widening thighs.”

“The Fork” doesn’t really conjure up sexiness or bad American pornopulp anymore, but it does keep it real when it comes to contemporary Paris. The metro stop smells like a mix of urine and MickeyD’s, yet another reason to love the golden arches a la urbain. As the intersection of immigrant, bourgeois, and hipster Paris, and a key path out of the city from the core, pretty much every flavor of Parisian comes by at some point, including bankers in Benzes and the second coming of Žižek.

“He soon knew all of Avenue Clichy like the back of his hand....”

I am right there with you, Henry. Here is my favorite bar/cafe, Caves du Chalet, where on account of the cheap and decent coffee, bread, cheese, ham, and wifi, one never actually has to leave. You can find everything from hip boutiques to cheap calls to Guinea in the warren of little side streets and passages, although I am more partial to Chinese vegetable merchants, halal butchers and an old-school, five-euro straight razor shave.

“On Place de Clichy he found his oasis-the Cafe Wepler. From the moment he first went there, Henry thought Wepler was nothing less than the epicenter of sex. It reminded him of Broadway’s dance halls, in which, when one entered them, one penetrated ‘the vaginal vestibule of love.’For two years he made it his home, his principle observation point.”

The Wepler is downstairs from my apartment, and saying “Bonjour” to its staff as they smoke in our shared passage is part of my daily ritual. Alas, although clearly still going strong, it is not quite the “epicenter of sex” that it once was, even if my wife would claim that the 100-euro seafood platter comes close. The denizens of Wepler seem to come in two types: those with enough cash to “penetrate the vestibule” and eat oysters inside, and those who nurse a coffee on the ample terrasse and watch the human and vehicular traffic on Place de Clichy glide by. This is actually a classic Paris division, and let’s just say it is clear on which side of the line I belong.

Credits: Opening photo linked to source. All other photos by Alex Schafran.