Keep Off the Grass in Hong Kong Parks

Hong Kong is one of the densest cities in the world. In between high-rise buildings, public space is limited and strictly regulated. In city parks, laying down on the grass, playing ball and playing the guitar are prohibited. These are just a few examples from a long list of rules that govern public use of open space.

The City of Hong Kong's Leisure and Cultural Services Department (LCSD) is in charge of most public space, and while many of their rules rationally govern parks for the majority of users, a few are baffling. For example, you are not allowed:


fly kites, model aircraft, balloons or other devices... melt or burn wax; or sprinkle or pour liquid onto hot wax... play any musical instrument, operate any radio or gramophone, or sing to the annoyance of any other person, unless the playing of the instrument, the operation of the radio or gramophone, or the singing of any song is in accordance with written permission granted by the LCSD (Legislative Council Secretariat, City of Hong Kong).

Perhaps the most notorious restrictions have to do with grass. In most cases, grass is not to be walked on, sat on or played on. Signs declare the grass off-limits, and little white chains threaten to trip any trespassers. Other than strolling on paths, sitting on benches and a bit of tai chi in plazas, there are few other impromptu leisure and recreational activities that one can enjoy in a Hong Kong park. The LSCD generally cites maintenance issues to explain the regulations. Some people think it is a subtle crowd-control measure. 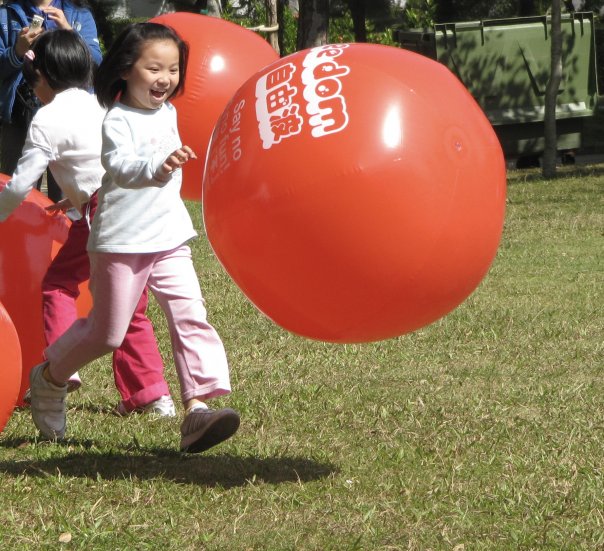 In the last five years, however, these rules have been creatively challenged by a few residents who are trying to improve the quality of their parks. Freedom Ball, a group of activists, pokes fun at the government's park management by blatantly breaking the "no balls" rule. Their "installations" consist of releasing 1,000 large, red inflatable balls in city parks. As children play with the balls, they call the strict regulations into question.

Hong Kong media artist Thickest Choi was frustrated with the lack of green space and the government's tendency to favor development over the public realm. He created Lawnmap, an interactive website that displays the location and status of usable lawns around the city. The website currently lists about 130 lawns, mostly added by users. It also allows users to organize picnics, concerts and other events at these locations.

As the people of Hong Kong express their desire to use parks more freely, one hopes that the government will listen and relax its dominion over public space.