The words of the International Olympic Committee president Avery Brundage after a terrorist attack marred the 1972 Olympics. Source: Trainingsplatz72 Exhibit

As the London Olympics draw nearer — and raise controversy on issues ranging from transport to securitization — Munich is celebrating 40 years since it hosted the games. Much has changed during this period.

In the past decade, the International Chair in Olympism issued a number of reports pointing out that the games have grown larger and more expensive since 1984. On one hand, growth has meant increasing participation from athletes the world over and more state spending on national sports. On the other hand, increasing commercialisation has been criticised as the main drive behind an event that has little to do with sports anymore. The games are also a major event in the history of the city in which they take place, leaving behind an image in the minds of spectators around the world and a legacy of steel and concrete in the urban landscape.

Massive lobbying and maneuvering goes into putting together a bid to host the Olympics, seen as a means of putting a city on the global consumer map. Gigantic budgets for organizing the event are justified in terms of projected revenue from tourism, and cities often mask some expenses as public works in order to downplay costs. This means that cities with less financial capital do not stand a chance in the bid to host the games.

Speaking at the Legacy Conference in November 2002, current International Olympic Committee president Jacques Rogge criticized Olympic "luxury" projects that would become "white elephants" after the games, preferring developments that would prove sustainable afterward. After Beijing hosted the games four years ago, it became clear that the race to the top in terms of Olympic spending was spiralling out of control. In this moment, it is worth looking back and taking stock of the transformative effects the 1972 Olympics had on Munich, a city in the midst of re-inventing itself.

Among the events organized to celebrate the 40-year anniversary of the Munich Olympics is an exhibit called "Trainigsplatz72" (Munich 1972 | The Training Ground of a Democracy). The display focuses on the idealistic values that guided the organizers in Munich, who were eager to distance themselves from the city's National Socialist past. 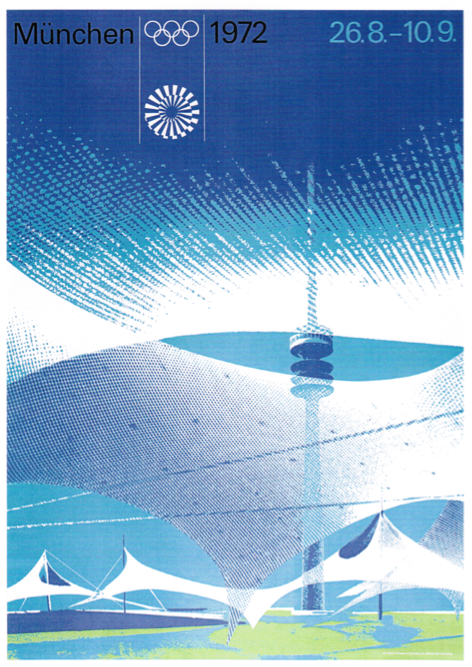 While commercial brands were not yet part of the Olympics in 1972, a very particular type of branding was at work in the conception of the event. Ranging from the choice of color palette (the design committee chaired by Otl Aicher constantly stressed the importance of not using red or black, colors associated with the Third Reich), to the timeless design of the posters and programs, and the creation of the first Olympic mascot (a multicolored dachshund), the message was one of apolitical optimism and multi-cultural community spirit. 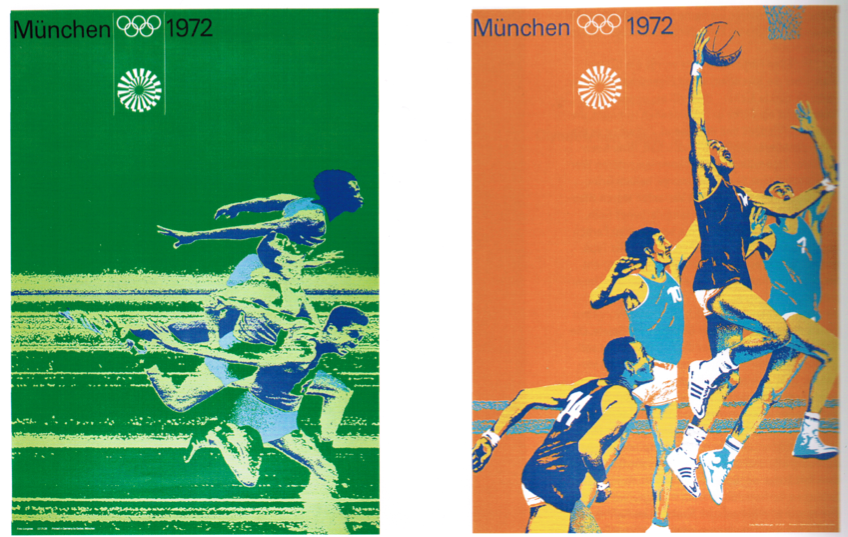 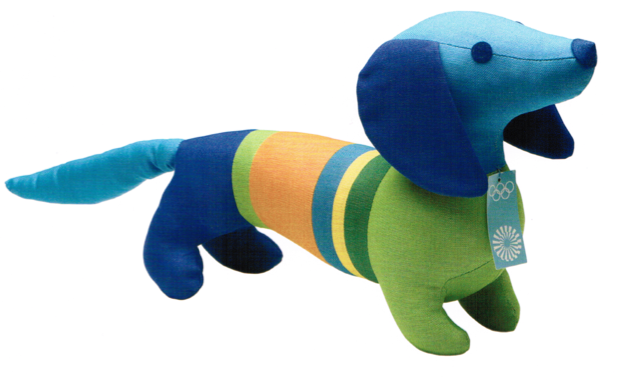 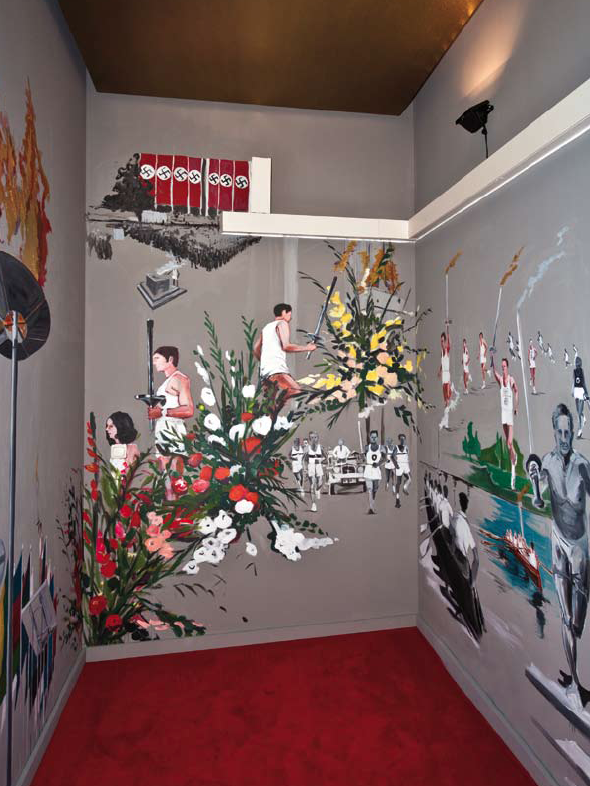 The Munich Olympics were designed in opposition to the 1936 Berlin Games. Source: Trainisgplatz72 Exhibit

Guided by these principles, the atmosphere in the Olympic village was supposed to be one of friendly openness and trusting transparency. Security was lax even by the standards of the day as part of a determined effort to erase the memories of a militaristic Germany. In the aftermath of the terrorist attack against the Israeli team which will forever mar the memory of the 1972 Games, these measures came under severe criticism; today, security expenses make up for a large chunk of Olympics budgets.

Commonly, the most lasting legacies of Olympic events are those etched in the fabric of the host city. Sometimes they do end up to be luxurious "white elephants," but in the case of Munich, the Olympics architecture and its accompanying infrastructure have been organically incorporated into the city and are regarded with pride by users. Munich had begun work on a modern transport system before winning the bid to host the games, but the underground trains (U-Bahn) as well as the surface commuter line (S-Bahn) were seen as the crowning achievement by an Olympics planning committee keen on avoiding massive car traffic and the need for immense parking lots.

As is the rule with Olympic villages, Munich's Olympiadorf was sold as affordable housing units. Mostly home to students and small families, residents point out the disability-friendly nature of the building complex thanks to the comprehensive facilities, and the green, car-free environment (motorized traffic is diverted to underground routes). Transforming Olympic villages into thriving communities has become increasingly difficult in the face of housing shortages, and there have been concerns that the Delancey and Qatari Diar purchase of the London site will mean less affordable housing and increasing gentrification. 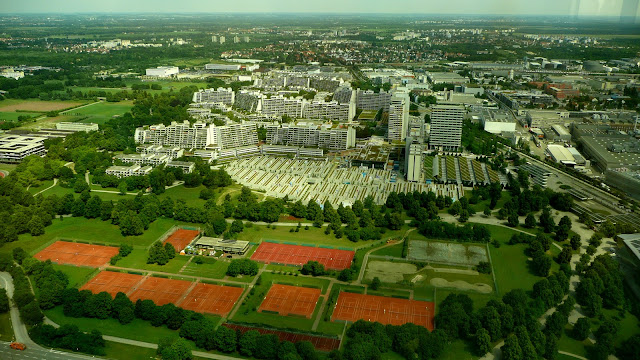 Sports facilities are the most significant infrastructure host cities have to worry about. The design and construction of the Munich Olympic stadium was also framed in terms of an effort to heal wounds of the Nazi past. Built on top of a pit leftover from WWII bombings of the city, the stadium was considered revolutionary for its time. Sweeping canopies made of transparent acrylic-glass, stabilized by steel cables, were meant to imitate the Alps and symbolize a new democratic and open society. Home to the Bayern Munich football team until its relocation in 2005, the stadium and the park continue to serve as a venue for cultural, social and sports events. 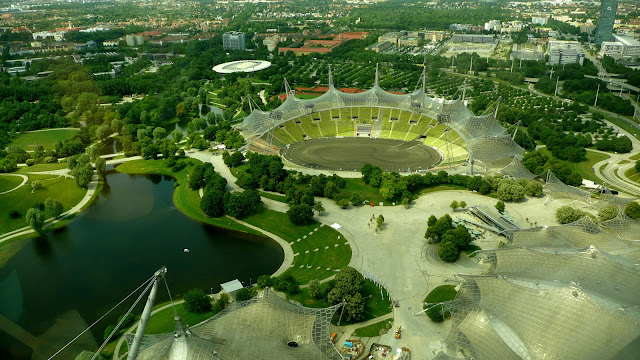 A view of the Olympic Stadium in Munich. Source: Cristiana Strava

While there is no doubt today that the Munich Olympics were far from being free of ideology as the first games to be hosted in a post-WWII, divided Germany, the values that guided its organizers seem childishly naive compared to what some critics have termed the current "intensively mediated global lollapalooza." As an event with tremendous transformative potential, the Olympics could stand to gain from a transformation toward a more sustainable event.

Cristiana Strava is a PhD student in the Anthropology of Architecture at the School of Oriental and African Studies in London. In her previous life, she studied Anthropology and Visual and Environmental Studies at Harvard, but her fascination with the built environment dates back to a Romanian childhood spent in drab communist housing.