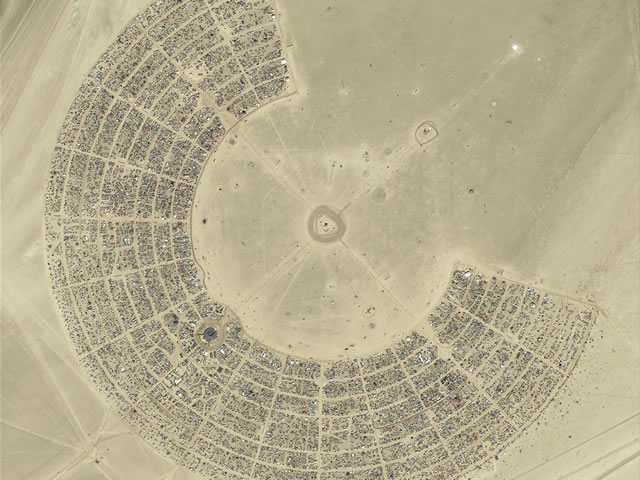 “At Burning Man, participants create the city they want … People realize that they can do things — maybe small things — that improve how they experience and interact with their fellow citizens.” Nate Berg’s introduction to that yearly festival of urban creation and destruction was poetically stated, and those lines of his conclusion resonated with me. He spoke to part of the reason why visiting the Black Rock Desert with 45,000 strangers is, for me, a chance at personal renewal of the way that I experience my urban environment and personal community for the rest of the year. I think his point hints at what I think is the deeper implication hidden in Burning Man’s very existence for the way we conceive of modern urban life.

Burning Man is not only a place where creativity and participation happens. Beyond the bare essentials provided by the setup and cleanup crews, it is created entirely by the participation of the people who come. It is a place where the public transit, nightclubs, amusements, performances, bars, and other activities are mostly provided by what we would typically refer to as “hobbyists,” amateurs who have day jobs and offer these things to others of like mind simply because they’re fun to do and it feels good to provide them. There is a massive brigade of people who volunteer, as part of their rather expensive vacation, to walk around for hours in odd-looking outfits silently lighting the hundreds upon hundreds of oil lanterns that light the night-time streets. It is a veritable orgy of community spirit.

Compare this to how our communities function at home. Optimizing for scale, efficiency, economic growth, and individual choice, we tend to live lives that are relatively disconnected from those around us. Many of us, if not most, went to high school with one group of people but then went to college elsewhere and lived in another city after that. We live in neighborhoods that may or may not contain friends but don’t typically know our neighbors, and rarely know them well. We have places in cities that we frequent—coffee shops, bars, restaurants, parks, shops—but if we see someone there that we know, it’s a surprise, and it’s not often that we take any deep sense of ownership over those spaces. The tribes we stay connected with are dispersed across neighborhoods, adjacent cities, neighboring states, and (increasingly) the world. There is very little reason to be involved in any particular place. And, I would argue, it is largely for this reason that we see declining levels of participation in politics at every level, and a steadily degrading level of sophistication in the national discourse. There can be no simple reasons for these things, of course, but I do think that we would see greater engagement if people felt bonded to their place and the people who live there.

I think one lesson we can learn from what happens at Burning Man is how possible it is for people to bond deeply with a place even if they inhabit it only for a short period of time. Everyone who buys a ticket is encouraged to participate in whatever constructive way most taps their passion, and the result every year is a city that stands as a living monument to the energies that drive its inhabitants. That creative expression is easy to see as an explosion of ego, a geyser of self-centeredness that bursts forth from a group of people who spend most of their year feeling stifled by the fact that their workplaces frown on their innate desire to wear fake fur and walk around painted red without any clothes. But the greatest works at Burning Man are carefully crafted to tickle the fancies, palates, eardrums, and eyeballs of the people who come. They are given, and like all gifts, thoughtfully shaped to please the receiver. We have words for that kind of giving, where the recipient is the group of others around you: community service, civic engagement, or public spirit.

Somewhere along the way we’ve forgotten the importance of that feeling. We’ve let it slip through our fingers as we chased geopolitical dominance, free trade, and the growth of our mom and pop shops into titans of the global marketplace. It was the first chance we had at those goals and we understandably shot for the moon. But now we’re left with a society where enough people feel that loss for 45,000 of them to pick up stakes, drive or fly to the middle of nowhere in Nevada, and throw a yearly orgy of giving, just to give themselves enough fuel to run on for the rest of the year or two before they have to come back for more. 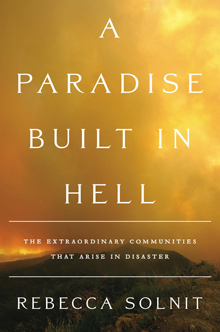 A similar spirit is in evidence after a major disaster, as the San Francisco author Rebecca Solnit describes in great length in A Paradise Built in Hell: The Extraordinary Communities that Arise in Disaster. She argues persuasively that we can and should bring more of that spirit into the structure of our urban lives, and I think the same is true of Burning Man. Stories abound of the ways that people have channeled that spirit of giving in their own lives after attending, in small ways and large. One of the most notable is the group Burners Without Borders who organized to help out New Orleans after Hurricane Katrina and continue to provide aid around the world. But we can tap that spirit of participation and giving in many more than just the Burners if we get creative about how to provide opportunities for it in our cities at large. As Solnit notes repeatedly, the desire and ability to identify with a community and provide something for that group is resident in all of us. The temporary utopia that happens in disasters and at Burning Man is just a hint of what could be released.

I don’t have anywhere close to all of the answers, but a few somewhat-related examples come to mind. One is the description of the political culture in Portland that I found in Robert Putnam’s Better Together: a city where there are associations for every small neighborhood and every political concern, and where the machinery of the city government is designed to require listening to those voices. Both identity with place and participation in the process are strong. Another is the many murals of San Francisco’s Mission District, all of which are created by local artists and/or schoolchildren. They are rarely defaced in a neighborhood otherwise covered with graffiti scrawl. Another is Front Porch Forum, a Craigslist-style site where you see only what your neighbors put up, which has had tremendous success rebuilding social capital in the places where it has become available. And finally, the rapid growth of the Business Alliance for Local Living Economies is evidence that many entrepreneurs are seeing their small businesses as a way to tie together their communities rather than pull them apart. There are many ways to give people a sense of ownership over a place, connection with the people nearby, and the opportunity to contribute something meaningful. It’d be nice if we didn’t have to go to the desert to do it.

Noah Flower researches innovative methods of achieving social change for foundations and nonprofits at the Monitor Institute, where he also edits the blog Working Wikily. He began attending Burning Man in 2003.

Credits: Images linked to its source.