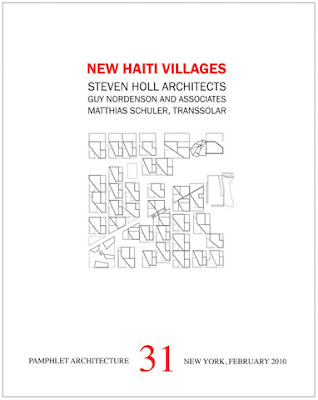 The Pamphlet Architecture series, however, represent more than a nostalgic reference. Published consecutively under the purview of renowned architect Steven Holl over the past 30 years, they comprise an index of provocative proposals ranging between the theory and practice of design, buildings and cities. Within the cacophony of debates swaying the environmental design professions, PA sets a minimalist yet anchoring tone that distills a subtle combination making it a valuable resource for practitioners and students alike: a practical manifesto in the form of a radical monograph.

Pamphlet Architecture 31 – New Haiti Villages (PA 31), is an appropriate contribution to this tradition. It exemplifies PA’s legacy of contingent architectural and urban design discourse. But this issue also stands out from the rest. It is an expedient attempt to support the case for a design proposal by Holl in post earthquake-reconstruction Haiti. This purpose gives PA 31 a concrete relevance and opens a deeper interpretation for its proposal. A year and a day after the earthquake that changed the lives of millions of Haitian citizens, what does it tell us about how architecture may aid in the reconstruction of Haiti?

The issue starts with an introduction by Holl where he explains the application of the Dense-Pack Villages in Haiti. He states: “I was struck by the similarities between the terrain in Haiti and that for an un-built project we had developed on a hillside in Turkey.” The similarities Holl alludes to are not evidenced and neither is the process of transferring the vision from one place to another; instead he emphasizes the need for an “off the grid” housing experiment embracing multi-disciplinary collaborations and sustainable techniques. Holl also stipulates the issue’s goal of acquiring funding and sponsorship based on a cost estimate for the conceived infrastructure. Indeed, the circulation of capital is another factor that make this issue unique. On the back cover, the curious reader is guided to a website and informed that “All profits from the sale of New Haiti Villages go to rebuilding efforts in Haiti.”

The deployment of physical models - master-planned communities - on existing contexts and populations is not new. Exemplars can be found through much of 20th century modernist architecture and planning. Contemporary times offer no exception. Nevertheless, the manner in which this approach is reconfigured with new problems, questions and ways of intervening is what makes PA 31 a useful and valuable read. Its proposal and supportive elements; timelines, full-page graphics, plates, sketches, construction documents, photographs of physical models and watercolors articulate an argument comprising benevolence, philanthropic action, the role of the foreign expert and NGO’s in the reconstruction of Haiti. In this way architecture, as a professional practice, expands into new types of scopes unveiling interrogations for both the practitioner and the student.

Holl’s introduction is followed by a timeline of Haitian history, an essay on the Lakou, a compelling poetic note entitled “Port-au-Prince: Capital of Pain” and a number of rhetorical questions regarding the who and how of reconstruction. This brief preamble serves a utilitarian aim within the publication’s longer narrative. History, the search for identity in form and an appeal to emotion, weave a preface that sets the stage for questions whose answers pave the way for Holl’s tabula rasa approach. The timeline offers a simplified trajectory of Haiti’s complex history for a general audience, yet establishes a frame of instability, exception, political upheaval and emergency in the reader’s imagination.

In essence, Haiti requires intervention. The discussion of the Lakou – group living or community space - appeals to the reader with substance. This succinct essay calls for the use of a local traditional spatial arrangement for the purpose of reconstruction and confronts the controversial question of land tenure as well as livelihood head on. Nevertheless, its political, cultural and economic implications are not developed further, leaving pending interrogations behind. Turning the page, a painting by Jean Michel Basquiat is juxtaposed with the photograph dominated by the profile of a young Haitian woman walking away from the reader in an urban frame of destruction and devastation. Below it, a paragraph and a poem give voice to the horror and pain of her silence (Fig 1.).

The stage is set in a few analytical frames – history, identity and emotion – before the foray into Holl’s proposal. The transition between the introduction and the later parts pivot upon questions pre-empting the reader to the value of Holl’s design.
These selective questions suggest answers that claim intervention through the inclusion and exclusion of technical expertise, political position and national affiliation. In the same way, the centrality of aesthetic expression as a source of design solutions predisposes the primacy of the architect and his vision. In the subsequent pages, the Dense Pack village proposal is illustrated in both rigorous and schematic ways. Holl’s signature watercolors allow the reader to visualize the site through vignettes portraying an almost organic fusion between design, topography and fauna. The Architect’s characteristic bird’s eye view suggesting abstraction and distance is exhibited in photographs of physical models, plan views and alternative partis. These are accompanied with minor side commentaries focusing on the topics of rural urban-migration, deforestation and local economic sustenance after the earthquake.

One question immediately arises in this sequence: Where are the Haitian people in this proposal? The answer is both limited and limiting. The reader is taken from the photograph of a nameless woman to barely visible silhouettes at the end of a watercolor perspective. The architect’s hand turns an original street view of white plastered walls in the Aegean to a colorful version symbolizing the Caribbean (Fig 2). Below it a quotation reads: “Colors for exteriors and interiors chosen and painted by inhabitants.” Such limited presence verging on absence, is not only figurative or representational; it also challenges the design and its goals. How do the particularities of the “Lakou” relate to the planned courtyards in the proposal’s units? How are settled populations far from Holl’s planned communities transferred to their new homes? Who decides how this is done?

Turning to the construction documents, a closer look at the plans, elevations and sections reveal an architecturally astute proposal. The units offer a program that includes an array of amenities and diversity of spaces. Holl’s masterful design ability to capture light, involve plane and reveal structure in poetic assemblages, becomes evident through his careful awareness of vertical and horizontal room placement, cross-ventilation, building orientation and circulation. The power of its fierce clarity becomes undeniable when brought together as different master-planned schemes (Fig. 3 & 4).

But this holistic strategy, inherent in the quality and character of individual units, reveals cracks once totalized in full form. The aggregate solution and its alternative configurations present de-contextualized objects, ultimately derived more from a combination of parts rather than a relation to place. New Haiti Villages is a beautiful but place-less kits-of-parts. Similarly, public/private relationships, vital for the claims of identity and authenticity in the “Lakou” are not formulated. How the spaces within units and between them relate to the actual practices of the residents, their traditions, cultural spatial practices remains an enigma.

Holl also attempts to manage the politics of reconstruction in Haiti, where funding flows, decision-making and expertise function in a complex web of negotiation and contested legitimacies between local and non-local actors, citizens and non-citizens alike. His only statement in this regard is that his proposal is far from Port-au Prince “where the cleanup project after the earthquake is already mired in political bickering.” This declaration makes the critical reader ponder if the proposed sites for the Dense-Packed village are devoid of political eventualities. How does Holl’s proposal plug into political interests in and outside Haiti? Or to put it more concretely, for example, how does his vision relate to conflicting land tenure claims posed by residents, interests brought developers and investors or eminent domain decrees imposed by the Haitian state?

A final section deals with a number of sustainable technologies; solar energy, desalination, solar cooking, gray water treatment, compost toilets, and earthquake resistant structural systems. Collectively, these solutions conjure the potential for collaboration and interdisciplinary work with poignant physical results. But this collection also offers further lessons for consideration; where will materials for these technologies be manufactured? Could their production foment national industries and employ local economies? How could these solutions mobilize a Haitian labor force ranging from the professional to the low-skilled worker?

In many ways, PA 31, New Haiti Villages reveals more about the new burdens faced by the architect, the limitations of the tools she or he deploys and the complicated ethics she or he wagers within a calamity of such magnitude. If the case of reconstruction in Haiti serves as a precedent for 21st century urban and architectural design challenges, the new reality is one where practitioners need to address provisions and capacities facilitating local economies as well as participation and representation in their design outcomes. These arguments are not new but techniques beyond the scope of form, the model of the firm, the status of star-architecture and the limitations of the program remain to be explored.

As it turns out Haiti may aid the re-evaluation architecture. The questions derived from a close analysis of PA 31 point to an emergent field of practice and a debate embodied in the complications of Holl’s proposal: the intersection between architectural practice, humanitarianism and international development. How is the responsibility –social and professional - of the architect reformed with its new considerations in mind? What are the new and contingent ways to operate? What does Holl’s example mean for the value, ethics, methods and purpose of architectural design in a context such as Haiti?

In a recent conversation with an acquaintance, a Haitian architect, I posed some of these interrogations, the scope of this book review and the nature of its critique. His reply was immediate: “Bring it on. Any proposal or solution that gives attention to Haiti is good. We need all the help we can get!” His voice breaks the silence and fills the absence of the most important character in the story of PA 31: the Haitian people. It confirms that Pamphlet Architecture 31 – New Haiti Villages is indispensable reading for practitioners and students alike and belongs to a new shelf of important publications yet to be written. Its proposal, the problems it offers and the questions it leaves un-answered consider a place that lingers not only in the architect’s imagination but also one which is very present, human and concrete: Haiti.