Under growing demands of tourism and increased ‘consumption’ of the city, the historic centre of Barcelona has been facing serious pressures for over a decade now towards becoming rehabilitated (i.e. cleaned and disinfected) for tourist and middle to upper class resident appropriation. The Hole of Shame (el Forat de la Vergonya in Catalan), located in the Ribera neighbourhood, a traditional working class area renewed each generation by immigrants and workers seeking a new life in Barcelona, is an inspiring example of successful – to date – community-based resistance to this process, albeit achieved through persistent and continuous struggle.

Under the Plan for Integral Action towards urban renewal and rehabilitation of Barcelona’s historic centre (for the benefit of whom one must ask), between 2000 and 2003 PROVICESA, a public-private company majority owned by Barcelona City Council, expropriated and demolished various blocks in the Ribera neighbourhood. From cries of ‘this is a hole!’ and ‘what a shame!’, neighbours baptised this space the Hole of Shame, and denounced a situation they felt to be degrading for many reasons including their feeling of abandonment by public powers, the never ending demolition work, the loss of rights of those relocated to new flats and so forth. To make matters worse, this 5,000 square metre area was designated by the municipality to become a parking lot.

Years of conflict ensued with the municipality as neighbours claimed their right to the city, dignifying the demolished site by creating a public space for the community complete with fruit trees, community gardens, a fountain, benches, a football pitch, half basketball court, playground and multi-use platform. All elements were designed, built and managed by the neighbourhood collectively, and it exists as the only green space in the Ribera neighbourhood. 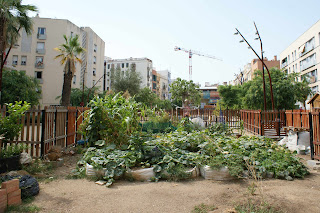 The site has persisted despite the not-so-subtle attempts of take over by the city through a citizen participation plan in 2005, criticised by many residents of the area as an action driven by electoral rhythms and lacking political will for a truly democratic and participatory process. One of the assembly members of the Forat stated in 2007: “As the participatory process advances it is clear that the administration knows what they want the result to be. When the participatory process starts all the decisions have been made beforehand, the most important demolitions have been completed, the new housing has been awarded and Santa Caterina [market] has been inaugurated. Only the Hole of Shame remains as a black spot, and a strategy of citizen participation is used as a way to annul the conflict.” 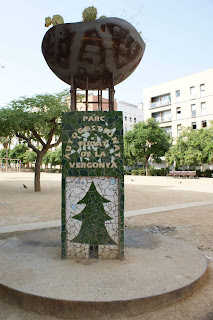 From the most recent material I could find, the future of the Hole of Shame remains uncertain. Either way it is certain that change won’t happen without continued struggle from residents and neighbourhood associations to maintain their right to the city, their self-managed public space in the heart of Barcelona's historic quarter.