Entrepreneurship in Hypergrowth Cities (And an Exercise in Discoverability)

The hypergrowth city is oftentimes a dense, cacophonous urban environment where you'll find entrepreneurship bursting at its seams - from the very soul and être of the city and her people, welling up and onto her vibrant, crowded streets.

Hong Kong, for example, is a veritable marketplace where transactions seem to take place every millisecond, day and night. Businesses piling upon more businesses, formidable lines at banks as omnipresent as the roar of buses, the sea of humanity oozing out from a whip-fast subway underground out and up to the streets, moving between mom-and-pop and big-brand establishments with equal facility as the neighborhood grocery store, traditional Chinese herb shop, wet market, local eatery, McDonalds, Nike, and various bastions of high fashion congregate in one frenetic coexistence. Living is compact, indefatigable, efficient: there is a momentum that is almost tangible everywhere you go, and with it a sense that Hong Kongers make the best of everything they have in their collective enterprise.


Hanoi, in a country of a different GDP profile but no less a compelling growth curve from that of Hong Kong's, provides a similar testament to the hallmarks of a hypergrowth city. Entrepreneurship is alive and well as you navigate through unceasing rows of shops upon shops and local businesses. The local streets play the simultaneous role of transportation network, local restaurant, place of business and recreation. With just a table, a few chairs, and a kitchen of a massive pot and a few bowls, local pho makers set up shop on the side of the road near spontaneous little ravines for drainage. These ad-hoc culinary congregations are almost oblivious to the surrounding swirl of pedestrians, scooters, and cars, all sharing the roads in an asynchronous chaos of traffic that has an internal and egalitarian logic of its own. Transaction scenarios also become a little more interesting: I remember watching as a woman on her scooter rode up to a shoe shop that had its wares spilling onto the pedestrian sidewalks -- without getting off her scooter or turning off its engines, she leaned over slightly to pick up a shoe and slip it onto her right foot for size, scooting off shortly after upon quick inquiry and a purchase.

One challenge that hypergrowth cities of such density and rife entrepreneurial activity face is solving for the discoverability of its multitude of local businesses. In Hong Kong, a city vertically built-up to accommodate the tension of a growing population against limited land and space, businesses -- whether a restaurant, clothing store, hairdresser or dentist's office -- can exist in improbable spaces; for instance, on the 28th floor of a highrise, or in a nook off a small street that you'd find only if you decided to walk through a nondescript door to the back of the building. Or in cities such as Hanoi, local businesses may not have formal addresses or its local populace may rely on a collective institutional memory of where things are, in lieu of official street names ("it's located in front of X's coffee shop, near where the rickshaw drivers park for the evening and where the old monument used to be").

If you were a local entrepreneur in a hypergrowth city, you might have the local yellow pages, flyers, listings in the local paper, local billboards, and the power of word-of-mouth in tightly-packed urban communities as baseline tools to make your business more discoverable. But with the density of information out there, there are very real physical limitations to broadcasting amidst the noise. 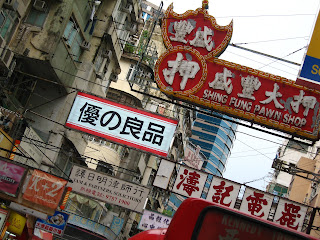 Can technology play a role in helping make local businesses more discoverable? Projects such as OpenStreetMaps and Google Map Maker provide their users on the web with the ability to map their neighborhoods, particularly in areas where precise and constantly up-to-date online maps don't exist.

In bringing the user-generated paradigm to online maps and local listings, the hope is that something like the local mom-and-pop pho favorite in Hanoi would be more discoverable because someone had decided to put it on an online map. While such services provide the possibility of empowering local communities and entrepreneurs themselves to promote the businesses they care about, the question remains on how impactful this user-generated public data is in countries where internet connectivity is still limited. I spotted the beginnings of a possible interim solution with a public map kiosk in Hanoi - take it a step further and imagine public kiosks that not only serve up, but also allow user input to add points of interest and local information into its repository, coupled with robust moderation to ensure the integrity of these user-generated edits. 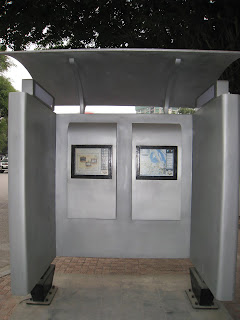 Mobile technologies could also benefit local businesses through SMS-based models -- users can opt in to receive announcements and updates on local businesses and their offerings, in the vein of services such as India's SMS Gupshup.

In the meantime, hats off to creative solutions that arise from necessity and invention, such as the one below seen in Causeway Bay, Hong Kong, where one of the hundreds of restaurants from the neighboring highrises had decided to add a little bit of attention-grabbing novelty to the tactic of handing out flyers at a busy intersection. 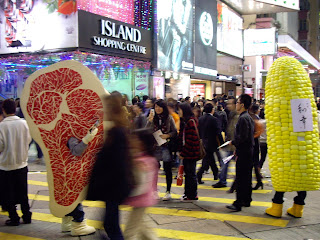