Life of a Homeless Child in Washington, D.C. 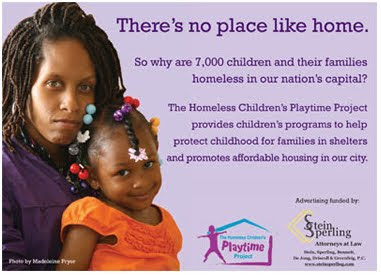 A few months ago, I wrote about homeless children and families in Mongolia who had to live in the sewers to stay warm at night. The idea of people living underground is a striking image and the open manhole covers around Ulaanbaatar are constant reminders of the danger of being homeless in the capital of Mongolia. However, homeless children and families are also a significant issue in the capital of the USA, even if less visually identifiable. The number of homeless families seeking shelter in Washington D.C. has more than doubled in the past decade, a problem worsened by rising rents and a steady decline in the supply of low-cost housing. More than 7,000 families in Washington D.C. are homeless each year and nationwide, more than one million children are homeless at some point during the year. In 2005-2006, 1.5 million children were homeless, which represents two percent of all children in the USA.

Homelessness has a strong impact on children’s emotional and physical well-being. According to a 2009 Inspector General report, children experiencing homelessness are sick four times more often than other children, have three times the rate of emotional and behavioral health problems compared to non-homeless children, and are four times more likely to display delayed development. These children are often unprepared for school and lack basic skills required for their grade-level. Recent Harvard Medical School research found that, “almost half of school age homeless children have emotional problems like anxiety and depression. They also experience four times the rate of developmental delays and double the learning disabilities, and they are twice as likely to be suspended from school or repeat a grade as other poor children.”

There are very few resources in Washington DC for homeless children and homeless families. There is a shortage of shelters, and families are often limited to certain shelters. In September 2009, there were 400 families on the waiting list for shelter. Once families are admitted into shelters, they are dangerous and scary places, especially for children. Most family shelters have no programs or services for children despite the myriad of risk factors associated with homelessness.

One positive resource for homeless families in the District is the Homeless Children’s Playtime Project (HCPP). The program began in 2003 when volunteers, including Jamila Larson, now Executive Director of HCPP, at the largest homeless shelter in the country discovered there were no toys or programs for the children living there. They helped establish a playroom and began providing weekly activities, snacks and supplies. Since then, the program has expanded to five shelters and sites throughout the city where it serves as the only children’s program. The sites vary, from D.C. General, the largest emergency family shelter in D.C. which houses up to 300 children and their parents during winter, to Turning Point, a transitional housing program for about 20 young mothers who receive a range of comprehensive services and stay in their apartments for up to two years.

HCPP argues that the traumatizing effect of homelessness on children could be dramatically reduced by the introduction of play programs and other services in the family shelters. In most shelters, children are denied the developmental opportunities and psychological support necessary for healthy child development. Recreation is severely restricted in the shelter environment and children are routinely denied necessities like soap, toys, books and a space to call their own. The American Academy of Pediatrics discusses the many benefits of free play for the cognitive, physical and emotional well-being of children and youth.

Homeless children are not identifiable on the street, the way the homeless children in Ulaanbaatar, Mongolia were. If you walked into a first grade class room, you wouldn’t be able to pick out the children that live at the shelter where I volunteer every week. If you walked into our playroom at the shelter, you still couldn’t tell the children were homeless. Like all children, they struggle with sharing, try to eat play-doh when adults aren’t looking, do crazy flips in freeze dance games, and shriek with delight at the exotic fruits and vegetables at snack time. They come running in with brand new sneakers and bright-colored shirts, and soon school backpacks and favorite toys line the hallway leading into the playroom. But our weekly sessions only begin to mitigate the trauma from experiencing homelessness. HCPP’s tagline says it all: Families Deserve Housing. Children Deserve Play.

For more information on HCPP and other homeless families’ resources and advocacy, please visit the website at www.playtimeproject.net.