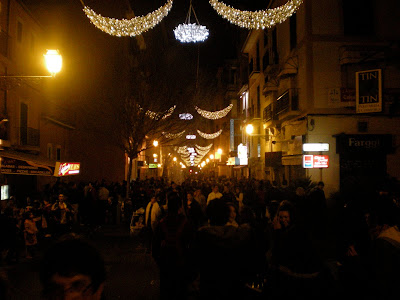 As is the tradition in all towns and cities across Spain, this week it is Palma de Mallorca’s turn to celebrate its patron saint, Saint Sebastian. While these festivals traditionally had religious origins – and indeed patron saints are chosen based on their strong Christian faith in belief and action as protectors of places or people – today they are a time when Town Halls or City Councils organise a week of activities, from art exhibitions, sports and youth activities and parades to outdoor music and dance festivals lasting late into the night. 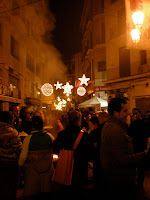 The latter, known as a revetla in Catalan, took place last night in Palma. Wandering around the city’s historic centre, it was amazing to see the complete transformation of public space and street life, absolutely teaming with people, including extended families with small children running about, when usually most nights of the week the streets are empty. As all the streets were closed to cars, taken over by people, the city pulsated with music, smells, life and laughter. 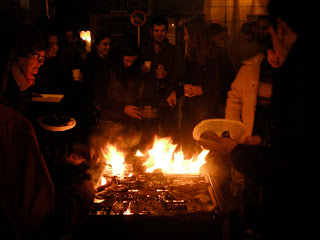 The Sant Sebastià tradition in Palma for this evening's festivities includes getting together with groups of friends or family and enjoying a torrada (barbeque) in the street, bringing your own sausages or meats to grill, eaten with bread and washed down wine, beer or mixed drinks. There are also bonfires, harking back to pagan traditions, and stages in ten of the cities plaza’s with live music playing until 3.30 in the morning.

What struck me as most important about this festival was the sense of being in the city and sharing the streets with others, the sense of life, energy and movement and especially civic life and participation. The question that comes to mind is how this sort of engagement and involvement other aspects of creating and living in the city can be mobilised outside of the festivals.