Urbanism in the Information Age 3.0: The Digital/Physical Interface 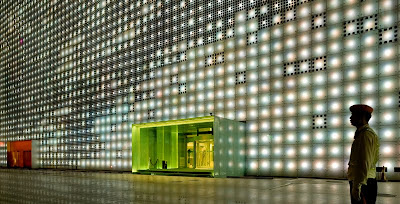 This post is the third in the Urbanism in the Information Age series, which explores the potential of digital technologies in urban transformation and interactivity. The first two posts explored IBM's approach toward "Smart Cities" and the visionary competition proposal - "the CLOUD" - for the London 2012 Olympics. This post examines the digitally constructed interface between author and reader, between the informer and the informed. The Zero Energy Media Wall for the Xicui Entertainment Complex in Beijing explores this boundary with a glass curtain wall that contains built-in photovoltaic technology to capture light energy that is then used to illuminate the facade of the building at night. 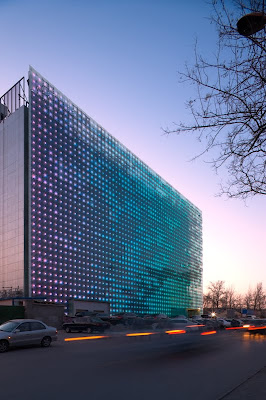 The project is particularly noteworthy for its successful integration of various building technologies that often stand in isolation. The glass curtain wall is blended with photovoltaic cells, which is also designed in concert with the LED display screen. The heightened complexity of this construction leads to a responsiveness in the building fabric that seeks to engage the wider community.

This leads to questioning the messages that such responsive facades might send. Who is the programmer and what will they communicate if actual urban surfaces become both receivers and senders of energy? As the MIT SENSEable City Lab and the decode exhibit at the V&A Museum also explore, such technology has the potential to position the reader as the momentary author, and to make the informed the proactive informer. Such possible transformations move beyond communicating building/urban data or displaying art installations to a fleeting audience, instead hinting at the reality of a responsive city that has the potential for self-correcting measures.


Credits: Images of the Zero Energy Media Wall from GreenPIX.