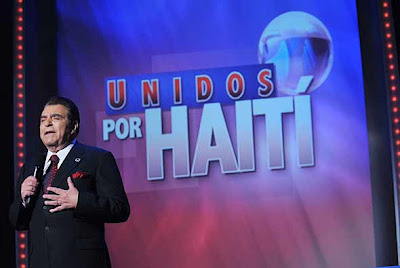 In this post, I build upon previous threads on collective and urban visuality to focus on humanitarian efforts in Miami following the catastrophe in Haiti. I am referring to Sabado Gigante - Giant Saturday - and its recently held Telethon: Unidos Por Haiti - United for Haiti.

You may have encountered Sabado Gigante while flipping channels on a Saturday night. For beginners: Sabado Gigante is the longest running show in TV history. It is broadcast live by Univision from its studios in Miami, with a signal reaching every television set in the US and across 42 countries in the Americas. The show originally began in Chile in 1962 under the direction of Don Francisco - a pseudonym for the show’s famous host, Mario Kruetzberger. Since then, its broadcast has appeared non-stop every Saturday. Today, it reaches an estimated 100 million people across the western hemisphere.


Unidos Por Haiti, started with a blast from the past: Gloria Estefan was joined by a chorus composed of members from local Haitian-American churches in song. She was followed by performances from the Latin American Farandula - Celebrities: Enrique Iglesias, Juanes, Shakira, and Daddy Yankee among many others. Besides the entertainment talent, the five-hour broadcast included interviews with survivors, Spanish-speaking Haitians in the audience and live broadcasts from Los Angeles and New York.


At several points during the broadcast, political figures reached out to Tele-videntes - TV watchers - for support and to report on rescue operations. Such was the case of Mexican president Felipe Calderon, who in an international presidential address, pleaded to Mexican residents in the US for donations, reminding them of the 1985 Mexico City earthquake. He was followed by US Senator Bob Menendez, who spoke about the recently adopted Temporary Protected Status for Haitians living in the US. And later on, Jose Miguel Insulza, Secretary General of the Organization of American States, provided information on aid and rescue operations under USAID.


Sabado Gigante has been criticized for its mixture of cheese, cliché and political incorrectness. The subordinate portrayal of Haitians and the Haitian-american community during the telecast raises valid questions. But the value of this Telethon may be lost in translation. For viewers in cities throughout the western hemisphere, Sabado Gigante is a weekend family ritual and this effort consisted on winning hearts and pockets. Unlike the demure and solemn English-speaking telethons aired in several mainstream stations last week, Don Francisco kept the mood light, fast, entertaining, but very serious. He mixed the sacred and the profane; the contingency of emergency with the swiftness of laughter. How did he do this through television?

As it turns out, in Sabado Gigante we may be watching an "authentic" Latin American hybrid characterized by some of the contradictions that make up this complex identity. The show has elements of the melodrama in Tele-novelas and semblances to performances in Carnival. In the Telenovela emotional excess and drama shape narrative caricatures of everyday life. In the Carnaval, sorrow and celebration, mockery and oppression become mass rituals in public space.

Both living traditions have contributed to the consolidation of nation states in Latin America, where cities are points of access for mass audiences and where racial difference and citizenship are managed by the state in public space. These characteristics acquire a trans-national visual format through the Telethon and transcend the public space of the square to the "public" square of the TV screen. The Telethon links spanish-speaking residents across the western hemisphere to form a collective effort based in Miami. Here, the tragedy is not only experienced locally, a complicated overlay of race relations and national identities shape urban identity. Live from Miami, exclusions and inclusions are brought to you for a good cause in Unidos for Haiti.

Credits: Image of F. Cuevas/Univision. Video of Unidos for Haiti from Univision.