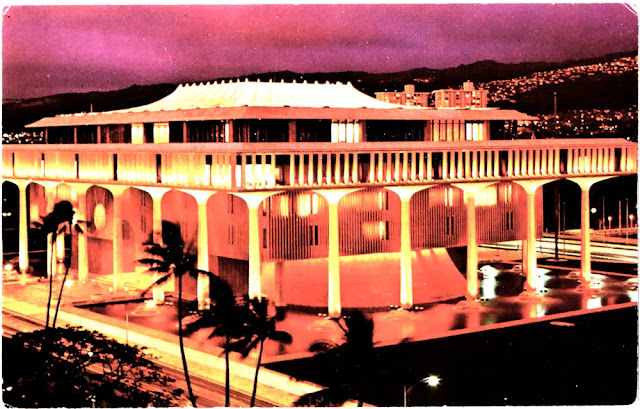 This is a postcard of the Hawaii State Capitol around the time of its completion in 1969. The caption on the back says: "Hawaii's striking and unusual State Capitol is an unforgettable sight when illuminated at night." Although this sounds kind of euphemistic, the building does appear striking and even beautiful in the photos I've seen.

Apparently, the architectural team (a collaboration between Belt, Lemon and Lo, and John Carl Warnecke) explained the building with metaphors from local geography. The reflecting pool symbolizes the Pacific Ocean, the legislative chambers are volcanoes, and the columns are coconut trees, with eight on each side to represent the state's main islands. Even the chandeliers in the legislative chambers are representative (of the sun and moon, that is). My favorite part is the open center, as "it is said that the sky is Hawaii's capitol rotunda." 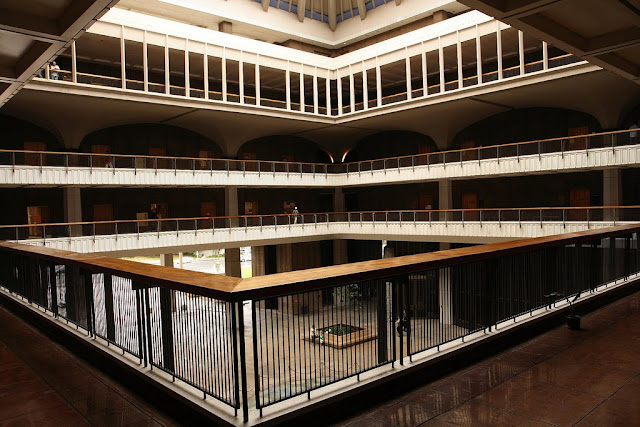 Aside from a "reflecting pool algae issue," which has "come to represent the pollution of the Pacific Ocean," the building seems to have aged well even in daylight. Here it is in 2007...

The capitol is described as "an American adaptation of the Bauhaus style called Hawaiian international architecture." Following the link, there is a more detailed explanation:


Bauhaus became an inspiration for Hawaii Governor John A. Burns in his plans to construct a new capitol building for his state. The Hawaii State Capitol was true to the traditions of Bauhaus in its use of clean lines, simple geometric shapes, pervasive use of black and the gray of concrete and the openness of the entire structure. But like all other architectural imports to Hawaii, Bauhaus was transformed into a uniquely Hawaiian style with the addition of several treatments. Hawaiian international architecture used precious indigenous koa wood for doors and furnishings and designs employed symbolism of natural Hawaiian phenomena.

Although the building evokes Lincoln Center, I can't say it doesn't look somehow more Hawaiian, especially after learning about its symbolism. I find this an interesting example of selling a project with themes of local significance. In this case, it seems to have worked. The result is a striking building with a story that may resonate. If anyone has seen it in person, or sees it differently, I'd love to hear what you think.

Credits: Postcard photo by Augustine Salbosa. Photo of the rotunda interior from aefitzhugh. Photo of the capitol in 2007 from Wikimedia Commons.