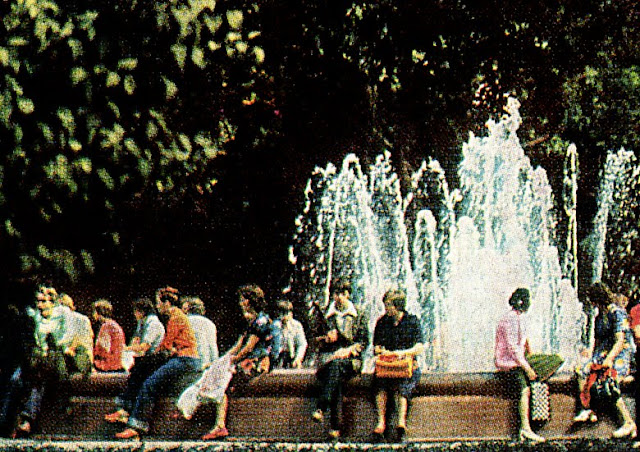 Fifth in a series on public parks in Moscow, this post is a brief visual overview of the period between the end of Stalin's rule in 1953 and the ascension of Gorbachev in 1985. It focuses on urban development under Khrushchev and Brezhnev, with emphasis on public green space. It is dedicated to those who lost their lives in the Moscow Metro bombings on March 29th. 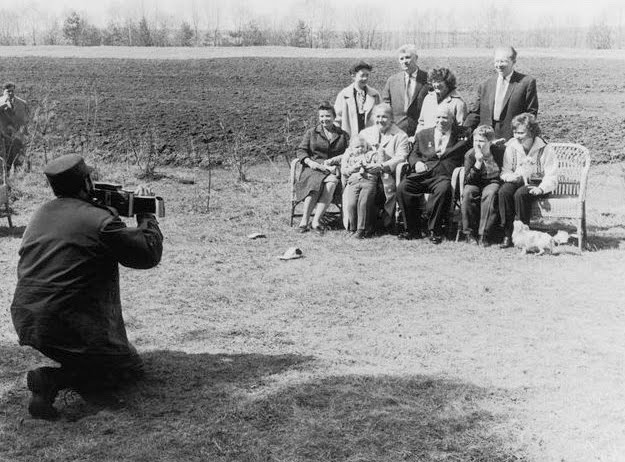 Castro photographing Khrushchev and his family during a visit to their dacha in 1963.

After Stalin's death, Khrushchev emerged as successor from among the dictator's closest lieutenants. He denounced Stalin at the Twentieth Party Congress in 1956, setting off an era of reform known as the thaw. Khrushchev introduced a number of bold initiatives to bring an end to shortages of food and housing which had reached crisis proportions during the Stalin years. 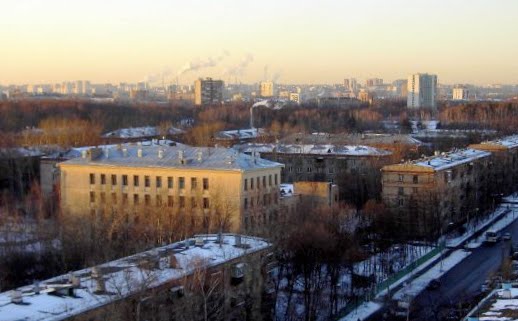 Five-story apartments built to address the housing crisis in the late 1950s.

As former Moscow city deputy in charge of completing the metro and other municipal projects during the 1930s, Khrushchev had a great deal of experience with urban development. He immediately put an end to the vainglorious architecture of the Stalin era, moving towards simple buildings made of prefabricated parts and often low-quality materials. 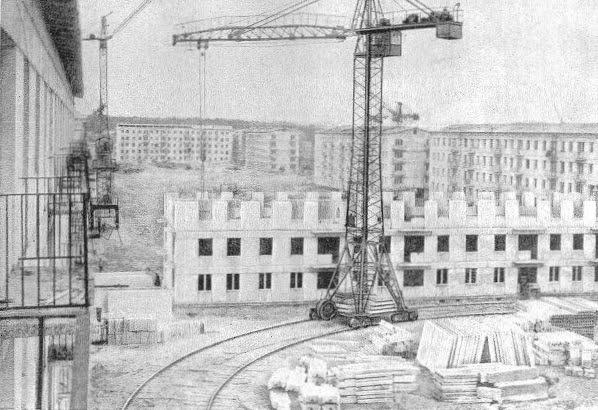 New residential construction became known as khrushchoby (a play on trushchoby, the Russian word for slums). Given the need to house millions of people as quickly as possible, Khrushchev called for functional modern architecture without the experimental quality of constructivist design. Still, most of Stalin's architects kept their jobs, and broader public criticism of urban development under the previous regime was suppressed.

The boundaries of Moscow were expanded in 1961 to provide space for more housing and a new highway ring. Small towns, agricultural land, former estates, and forests were transformed into apartments and public parks. 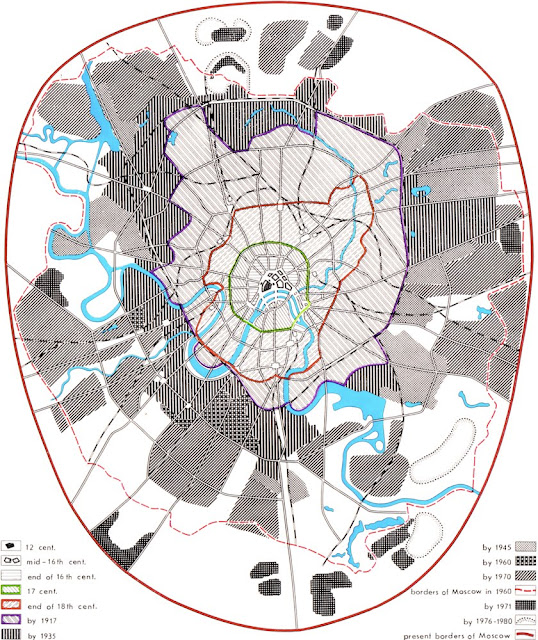 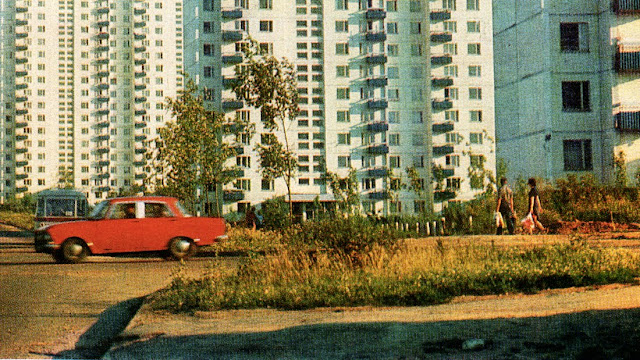 Life on the ground in a microdistrict.

Apartment complexes in the southwestern district of Moscow.

However, the Khrushchev administration made significant gains in housing and the development of landscapes envisioned in the 1935 Moscow Master Plan. Parks and athletic facilities were built throughout the city, including a massive heated swimming pool on the site of the unrealized Palace of the Soviets. 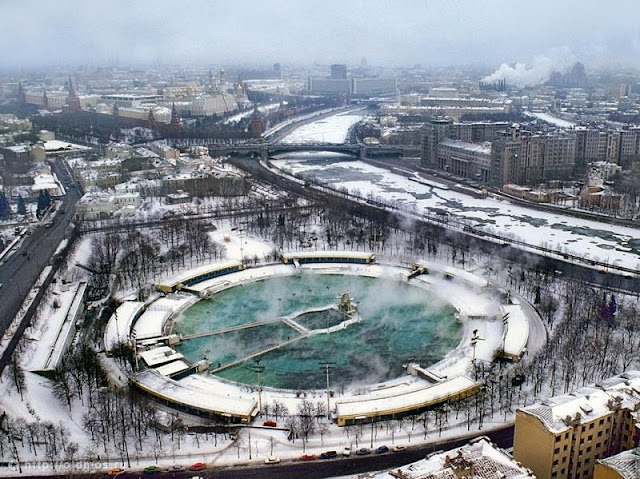 The Moscow Pool, built on the site of Stalin's abandoned Palace of the Soviets (current site of the rebuilt Cathedral of Christ the Savior).

New emphasis on improved living conditions, along with expanded freedoms and the indictment of Stalin, helped the Communist Party deflect some association with abuses from the past. Heavy industry, science, and technology remained paramount, giving rise to Yury Gagarin's pioneering space flight in 1961. 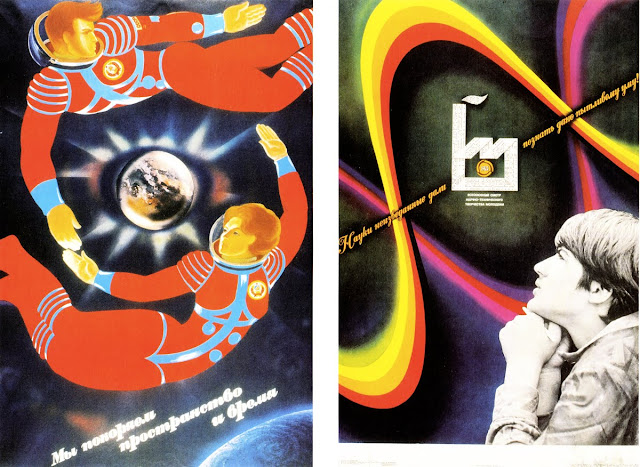 Khrushchev's ambitions included the attainment of full communism by 1980, but his administration became associated with erratic policy, blunders on the world stage, corruption, and internal power struggles. He was "retired" by party elites in 1964 and replaced by the more conservative Brezhnev. 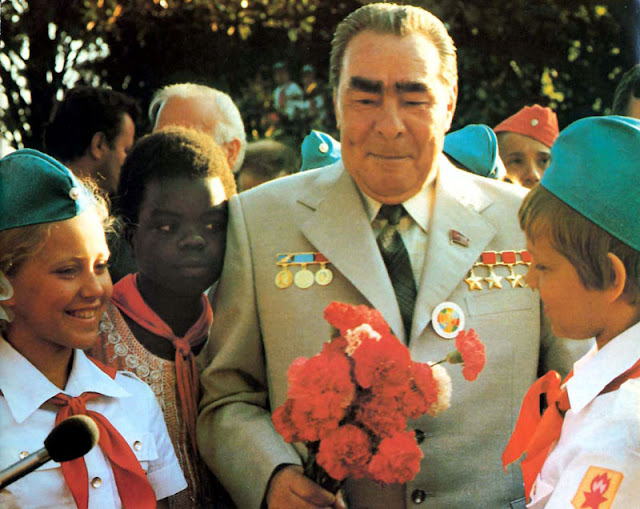 Brezhnev at the International Children's Festival, 1979. 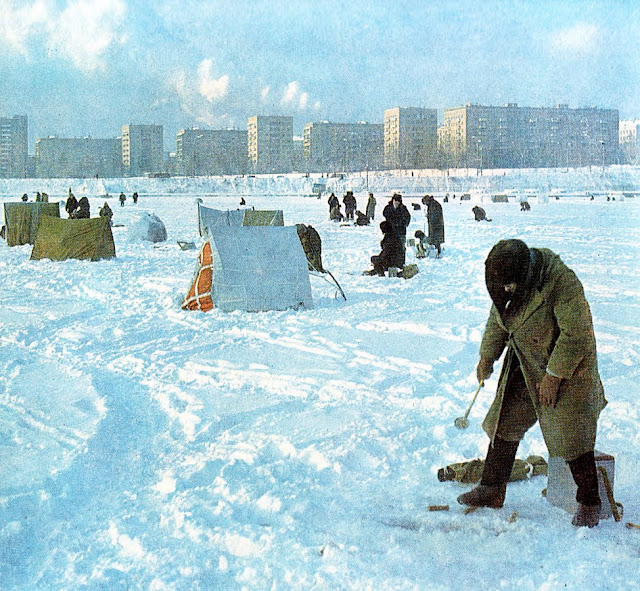 Ice fishing near home in Moscow, circa 1979.


Opening sequence to the classic Russian film "Irony of Fate (or Enjoy Your Bath)," which parodies mass housing of the Brezhnev era. 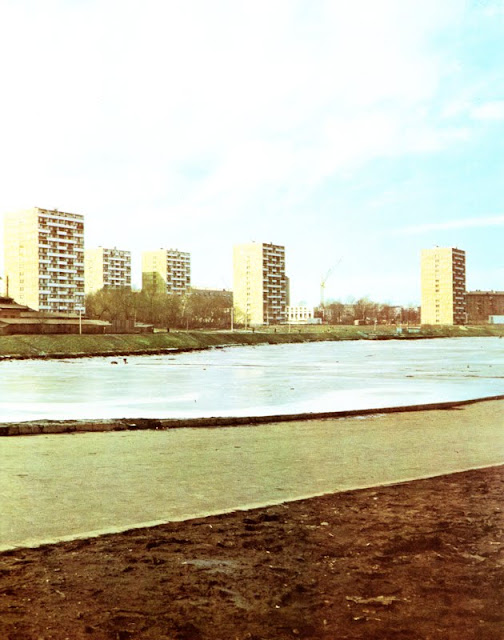 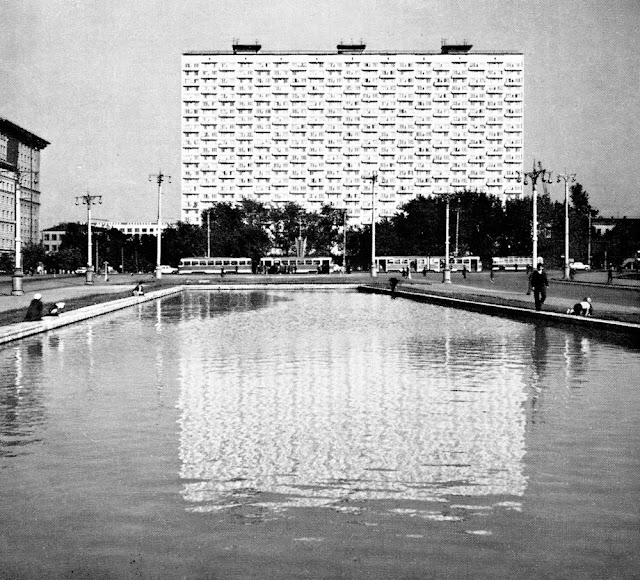 A 25-storey prefabricated building in Moscow.

Brezhnev continued the housing drive with taller and taller apartment blocks arranged in microdistricts. The 1971 Moscow Master Plan recommended clearer zoning, regional transportation links, preservation of cultural heritage, replacement of decayed building stock, and standards for public green space. Greenery was to weave through the city in continuous pathways, as explained in a planning document from 1967: "Parks, gardens, and public areas should form a single, unified system which interconnects internally as well as with the green belt in the suburban zones." * 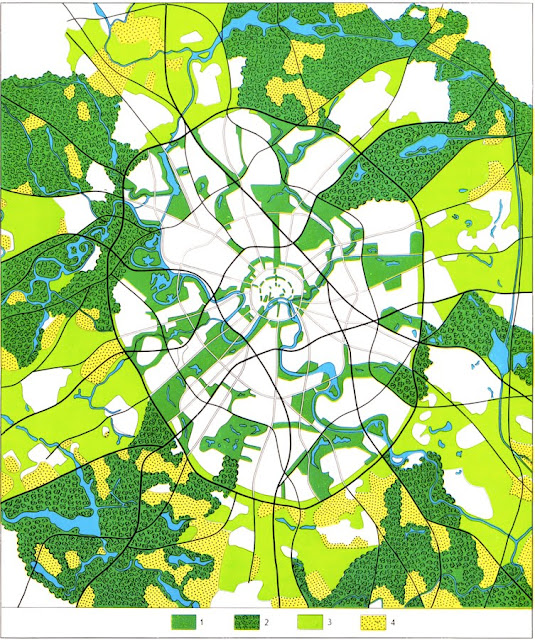 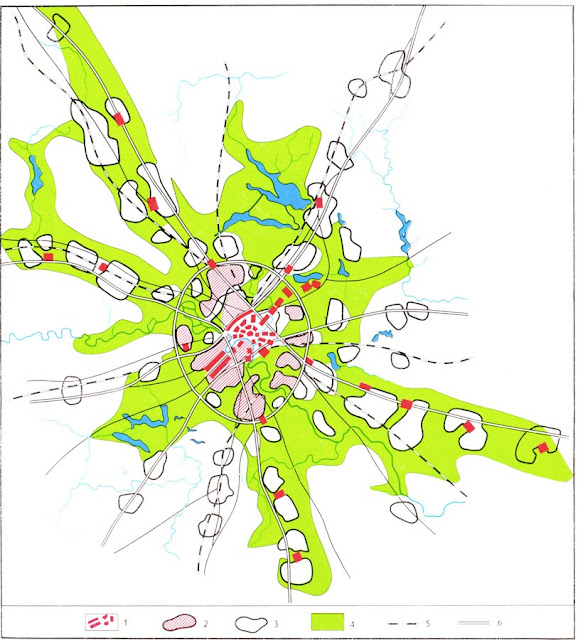 Athletic facilities were still a top priority, with heightened intensity after Moscow was selected to host the 1980 Summer Olympics. This also sparked a beautification campaign, including the expansion of public green space. Although the U.S. and over 60 other nations boycotted the games in response to the invasion of Afghanistan, the excitement at home helped divert attention for a time from dissatisfaction with Soviet rule. 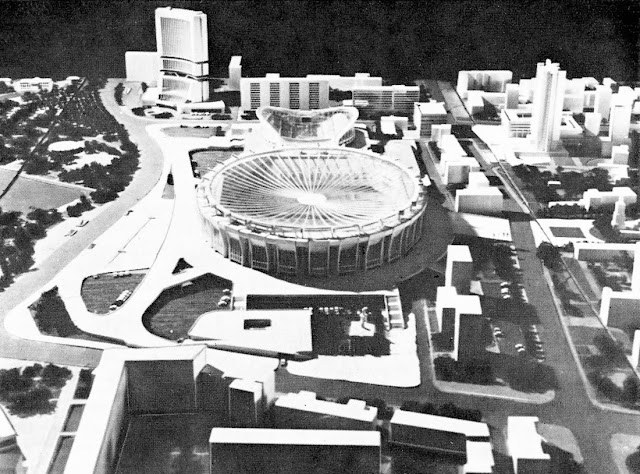 Model of the Olympic Complex at Prospect Mir. 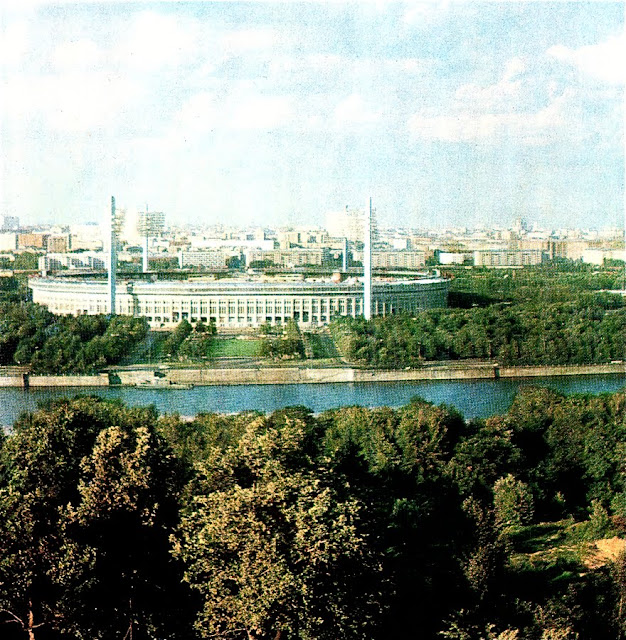 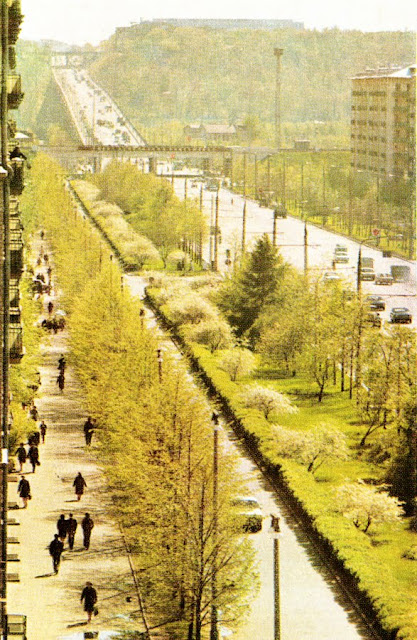 Despite considerable progress, housing and consumer goods were still in short supply by the early 1980s. Economic stagnation, corruption, and heavy-handed rule also fueled discontent. Brezhnev died in 1982. Yury Andropov, head of the KGB, took over and served until his death in 1984. Andropov was replaced by Konstantin Chernenko, who died a year later. This paved the way for Gorbachev, representing a new generation. 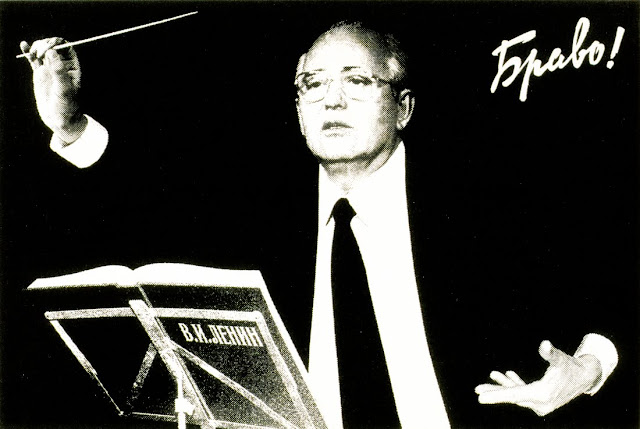 "Bravo!" A poster of Gorbachev by C. Faldina and A. Faldin.

The Khrushchev and Brezhnev years brought substantial improvements in housing for the public at large. Moscow also benefited from the establishment of green space linked by public transportation. But increasing dissatisfaction with the centrally planned state proved insurmountable. Even the government's best efforts to meet people's needs were unsuccessful, perhaps because of the scarcity of legal means for people to meet their own needs. At the same time, centralized authority allowed for the development and maintenance of remarkable urban parks. 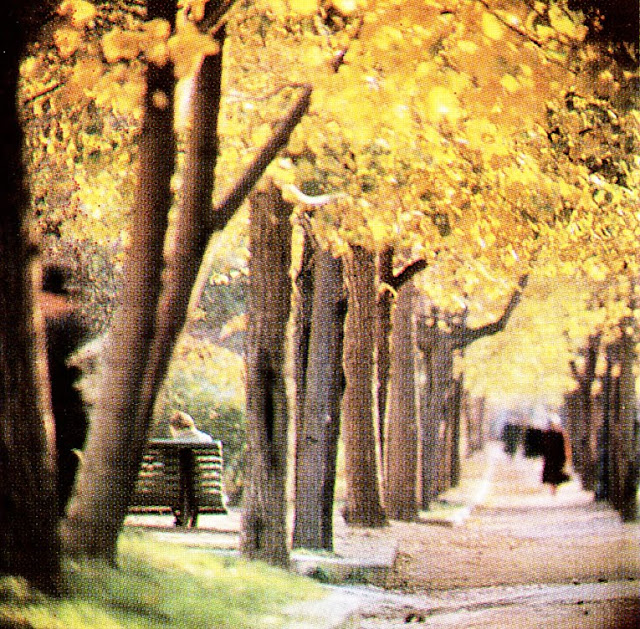 Russia's experience raises a number of questions. How can we realize great public works without suppressing citizen rights or suffering economic stagnation? Is there an alternative to economic growth that allows each person to meet their needs while at the same time working towards collective wellbeing? Can development objectives ever focus more on cooperation in solving global problems than on capital and consumption? If so, what might be the first step? 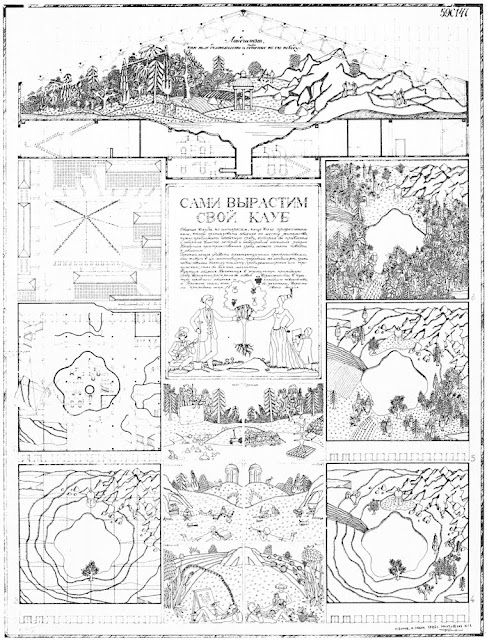 "We will grow our own club." A poster by M. Belov and A. Savin showing neighbors landscaping the interior park of their residential complex.

* Guidelines and Standards Regarding the Planning, Layout, and Facilities of Settled Areas in the Soviet Union, published by the State Committee of the Council of Ministers of the U.S.S.R. on Construction (1967) and translated by Katheryn A. Rumsey and Kathleen M. Quant (1974).